The equilibrium established between the unionised molecules and the ions in the solution of weak electrolytes is called ionic equilibrium.

Chemrcal substances which can ccnduct electricity in their aqueous stare or tn molten state are called electrolytes. The conduction of current through electrolyte is due to the movement of ions.

Electrolytes which dissociate to a lesser extent in aqueous solution are called weak electrolyte. All organic acids (except sulphonic acids), and bases like NH3. NH4OH, amines etc.

Degree of Ionisation or Degree of Dissociation (α)

It is the fraction of the total number of molecules which ionise (dissociate)into constituent ions.

According to Ostwald. the degree of dissociation (ex)of weak electrolyte is inversely proportional to the square root of the molar concentration of the solution. 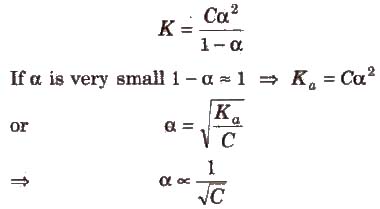 Hore K is dissociation constant and C is molar concentration of the solution.

Earlier Definitions of Acids and Bases

Earlier definitions of acids and bases was given by Robert Boyle, who classified them on the basis of their properties. According to him, acids are the substance which have sour taste. turns blue litmus red. liberate hydrogen with metals, conduct electricity in aqueous solution and neutralise bases.

Bases are the substance which have bitter taste, turns red litmus blue, soapy to touch, conduct electricity in aqueous solution and neutralise acids.

Arrhenius Concept of Acids and Bases

Bronsted Concept of Acids and Bases

HClO4 is the strongest while HCN is the weakest hydracid known.

CsOH is the strongest base known.

Amphoteric or arnphiprotic substance or ampholytes are the substance which act as an acid as well as a base, e.g.• water acts as an acid with NH3 and a base with acetic acid.

The order of acidic strength of some acids is

The adds like HClO4 H2SO4, HNO3 etc. react with water almost completely to form H3O+ ions.Therefore,all the strong acids in aqueous solutionsappear equally strong and their relative strengths in aqueous solution cannot be compared. Since H3O+ is the strongest acid in water. the strength of above acids come down to the level of H3O+ strength in water. Similarly.strong bases like NaOH. KOH. Ba(OH)2 come down to the strength of OH– ion in water.

This is called levling effect.

Lewis Concept of Acids and Bases

Lewis acid is a chemical substance which can accept a pair of electrons,

Lewis base is a chemical substance which can donate a pair of electrons. e.g.,

The Ionization Constant of Water Ionic product is the product of the concentration of hydronium ions and hydroxyl ion in pure water, which remains constant at a particular temperature. It is symbolized by Kw. At 298 K, ionic product of water (KW) is given as KW: = [H3O+] [OH–] = 1 x 10-14 mol2L–.

The value of Kw increases with increase in temperature.

pH is defined as the negative logarithm of hydrogen ion concentration.

pH of solution is accurately measured by pH meter or emf method or roughly by pH paper or indicator paper.

(PH can be zero in 1 N Hel solution or it can be negative for more. concentrated solution like 2N, 3N, lON, etc,

pH range for some important substances are :

Dissociation Constant of Weak
Acid and Weak Base

Let us consider the dissociation of weak acid (HA) as

Dissociation constant for polyprotic acids and bases. For a tribasic acid,

The overall dissociation constant (K) is given as

Solution which resists the change in its pH value by addition of a small amount of acid or a base, is called buffer solution.

Equation used to calculate the pH of a buffer solution.

(i) For acidic buffer,

Here, pKa = -log Ka, pKb = -log Kb and Ka and Kb are dissociation constants of acid and base.

[salt), [acid] and [base) represent molar concentrations of salt, acid and base respectively.

If addition of a strong acid or base changes the pH of a buffer by/unit, the buffer solution is assumed to destroyed, i.e.,

This means the ratio.

It is defined as the number of moles of acid or base added in 1 L of solution Lochange the pH by unity.

These are the product of reaction between an acid and a base.
This reaction is called neutralisation reaction.

(a) Normal salts These are obtained by complete neutralisation of an acid with a base, e.g., NaCI, K2SO4, etc.

(b) Acidic salts These are formed by incomplete neutralisation of polybasic acids. e.g., NaHCO3, Na2SO4 etc.

(c) Basic salts These are formed by incomplete neutralization of polyacidic base, e.g., Mg(OH)Cl, Bi(OH)2Cl, etc.

(d) Double salts These are formed by the combination of two simple salts and exist only in solid state, e.g., Mohr salt or ferrous ammonium sulphate (FeSO4.(NH4)2SO4.6H2O], alum, etc.

(e) Complex salts These are formed by the combination of simple salts or molecular compounds. These are stable in solid state well as in solutions.

(f) Mixed salts These salts furnish more than one cation or more than one anion when dissolved in water, e.g., Ca(OCl)Cl, NaKSO4, etc.

Salts are strong electrolytes and on dissolution in water split up into ions which react with H+ or OH– ions furnished by water yielding acidic or basic solution. The process is known as salt hydrolysis. 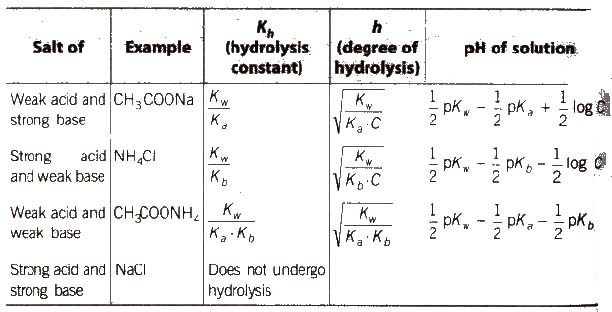 Hydrolysis is a reverse process of neutralisation.

According to Le-Chatelier principle, because of the presence of common ion. degree of dissociation of NH4OH decreases.

Colnmon ion effect is used in

Similarly in group III, NH4OH is added in presence ofNH4Cl to avoid the precipitation of V group radicals.

If the concentration of the common ions in the solution of two alectrolytes, e.g., OH- ion concentration in Ca(OH)2 and Ba(OH)2 solutions, is same then on mixing them there is no change in degree of dissociation of either of the electrolytes. Such solution are called isohydric solutions.

It is defined as the product of the concentrations of the ions of the salt in its saturated solution at a given temperature raised to the power of the ions produced by the dissociation of one mole of the salt. It is denoted by Ksp.

Consider the dissociation of an electrolyte AxBy

1. The concept Product of Ksp helps in predicting the formation of precipitate. In general if

2. In predicting the solubility of a sparingly soluble salt

knowing the values of Ksp, x and y, the solubility of the salt can be Computed.

Ksp of AgI is lower than t.hat of Agel. So the former gets precipitated in preference to later.

An acid-base indicator is a substance which possesses one colour in acid solution and altogether different colour in alkaline medium or the substance which shows colour change with change in pH. The point where the indicator shows a sudden change in colour during the titration is called end point. End point is the point at which the reaction is observed to be complete. 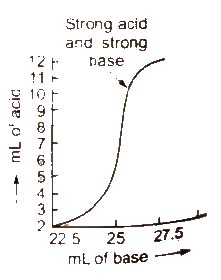 b) Titration curve for the neutralisation of strong acid vs weak base pH curve of strong acid (say HCl or H2SO4” or HNO3) with a weak base (say NH4OH) is vertical over the pH range of 4 to 7. So the indicators methyl red and methyl orange are suitable for such a titration. 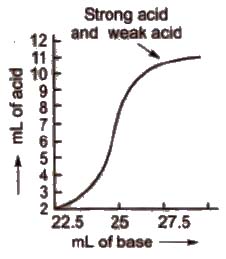 (c) Titration curve for the neutralisation of weak acid vs strong base pH curve of weak acid (say CH3COOH or oxalic acid) and strong base (say NaOH) is vertical over the approximate pH range 7 to 11. So phenolphthalein is the suitable indicator for such a titration. 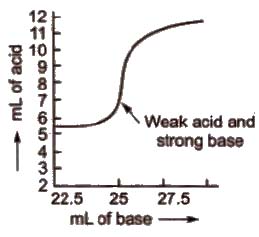 d) Titration curve for the neutralisation of weak acid vs weak base pH curve of weak acid and weak base indicates that there is no vertical part and hence, no suitable indicator can be used for such a titration. 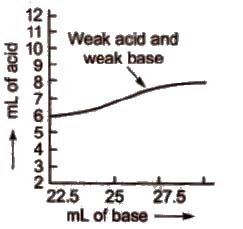