To produce its kind is a characteristic of all living organisms. You have already learnt this in Class VI. The production of new individuals from their parents is known as reproduction. But, how do plants reproduce? There are different modes of reproduction in plants which we shall learn in this chapter.

In Class VI you learnt about different parts of a flowering plant. Try to list the various parts of a plant and write the functions of each. Most plants have roots, stems and leaves. These are called the vegetative parts of a plant. After a certain period of growth, most plants bear flowers. You may have seen the mango trees flowering in spring. It is these flowers that give rise to juicy mango fruit we enjoy in summer. We eat the fruits and usually discard the seeds. Seeds germinate and form new plants. So, what is the function of flowers in plants? The flowers perform the function of reproduction in plants. Flowers are the reproductive parts of a plant. A flower may have either the male part or the female part or both male and female parts. 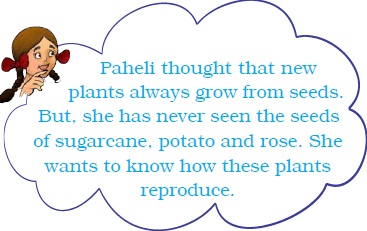 In asexual reproduction new plants are obtained without production of seeds or spores.

It is a type of asexual reproduction in which new plants are produced from roots, stems, leaves and buds. Since reproduction is through the vegetative parts of the plant, it is known as vegetative propagation.

Cut a branch of rose or champa with a node. This piece of branch is termed a cutting. Bury the cutting in the soil. A node is a part of the stem/branch at which a leaf arises (Fig. 12.1). Water the cutting every day and observe its growth. Observe and record the number
of days taken for roots to come out and new leaves to arise. Try the same activity by growing money plant in a jar of water and record your observations. 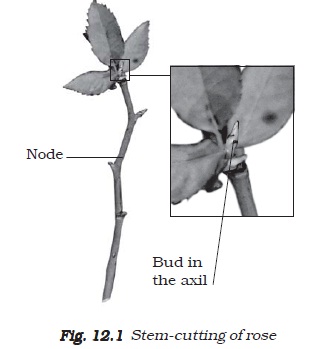 You must have seen flower buds developing into flowers. Apart from flower buds, there are buds in the axil (point of attachment of the leaf at the node) of leaves which develop into shoots. These buds are called vegetative buds (Fig. 12.2). A bud consists of a short stem around which immature overlapping leaves are folded. The vegetative buds can also give rise to new plants.

Take a fresh potato. Observe the scars on it with the help of a magnifying glass. You may find bud(s) in them. These scars are also called “eyes”. Cut a few pieces 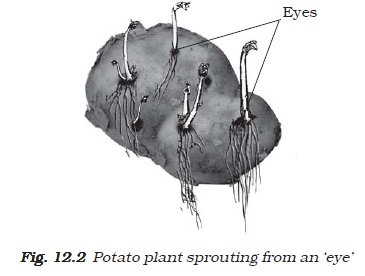 of a potato, each with an eye and bury them in the soil. Water the pieces regularly for a few days and observe their progress. What do you find? 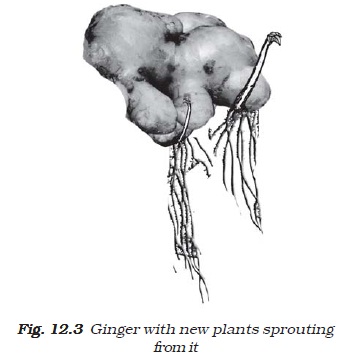 Likewise you can also grow ginger or turmeric (Fig. 12.3).

Bryophyllum (sprout leaf plant) has buds in the margins of leaves (Fig. 12.4). If a leaf of this plant falls on a moist soil, each bud can give rise to a new plant. 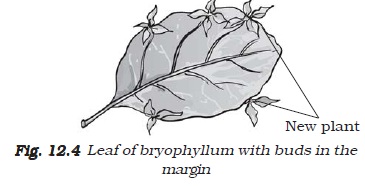 The roots of some plants can also give rise to new plants. Sweet potato and dahlia are examples.

Plants such as cacti produce new plants when their parts get detached from the main plant body. Each detached part can grow into a new plant.

Plants produced by vegetative propagation take less time to grow and bear flowers and fruits earlier than those produced from seeds. The new plants are exact copies of the parent plant, as they are produced from a single parent.

You have already learnt about the tiny organisms like yeast can be seen only under a microscope. These grow and multiply every few hours if sufficient nutrients are made available to them. Remember that yeast is a single-celled organism. Let us see how they reproduce?

(To be demonstrated by the teacher)

Take a piece of yeast cake or yeast powder from a bakery or a chemist shop. Take a pinch of yeast and place it in a container with some water. Add a spoonful of sugar and shake to dissolve it. Keep it in the warm part of a room. After an hour, put a drop of this liquid on a glass slide and observe under a microscope. What do you observe? You may see the formation of new yeast cells (Fig. 12.5). 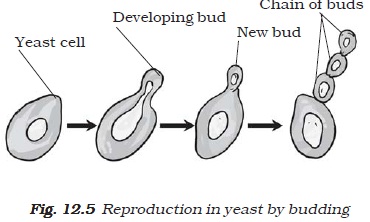 The small bulb-like projection coming out from the yeast cell is called a bud. The bud gradually grows and gets detached from the parent cell and forms a new yeast cell. The new yeast cell grows, matures and produces more yeast cells. If this process continues, a large number of yeast cells are produced in a short time.

You might have seen slimy green patches in ponds, or in other stagnant water bodies. These are the algae. When water and nutrients are available algae grow and multiply rapidly by fragmentation. An alga breaks up into two or more fragments. These fragments or pieces grow into new individuals (Fig. 12.6). This process continues and they cover a large area in a short period of time. 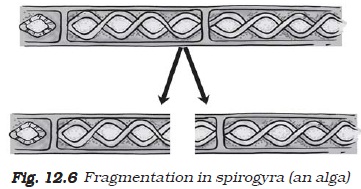 In Chapter 1 you learnt that the fungi on a bread piece grow from spores which are present in the air. Repeat Activity 1.2. Observe the spores in the cotton- 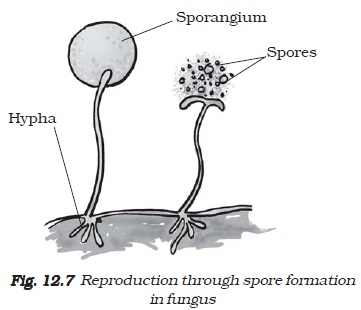 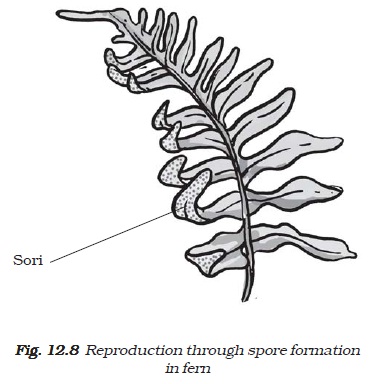 like mesh on the bread. When spores are released they keep floating in the air. As they are very light they can cover long distances.

The spores are asexual reproductive bodies. Each spore is covered by a hard protective coat to withstand unfavourable conditions such as high temperature and low humidity. So they can survive for a long time. Under favourable conditions, a spore germinates and develops into a new individual. Plants such as moss and ferns (Fig. 12.8) also reproduce by means of spores.

Take a mustard/china rose/petunia flower and separate its reproductive parts. Study the various parts of a stamen and pistil.

Both the male and the female unisexual flowers may be present in the same plant or in different plants.

Could you identify the anther and the filament of a stamen? [Fig. 12.9 (a)]. Anther contains pollen grains which produce male gametes. A pistil consists of stigma, style and ovary. The ovary contains one or more ovules. The female gamete or the egg is formed in an ovule [Fig. 12.9 (b)]. In sexual reproduction a male and a female gamete fuse to form a zygote. 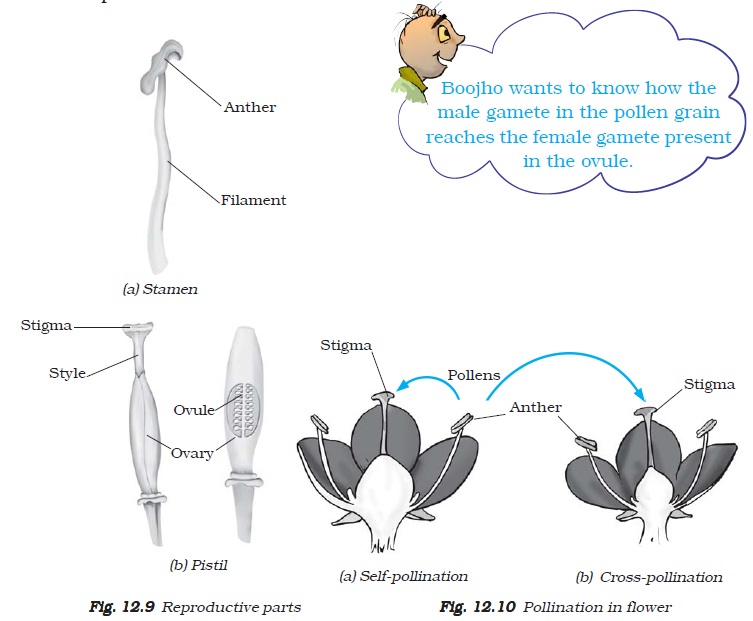 Generally pollen grains have a tough protective coat which prevents them from drying up. Since pollen grains are light, they can be carried by wind or 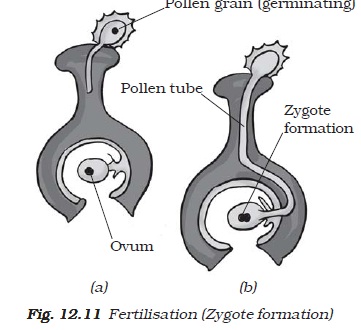 The cell which results after fusion of the gametes is called a zygote. The process of fusion of male and female 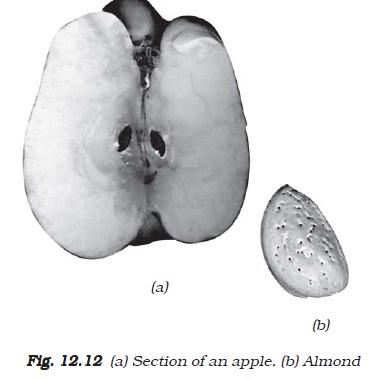 gametes (to form a zygote) is called fertilisation (Fig. 12.11). The zygote develops into an embryo.

After fertilisation, the ovary grows into a fruit and other parts of the flower fall off. The fruit is the ripened ovary. The seeds develop from the ovules. The seed contains an embryo enclosed in a protective seed coat.

What do you think will happen if all seeds of a plant were to fall at the same place and grow there? There would be severe competition for sunlight, water, minerals and space. As a result the seeds would not grow into healthy plants. Plants benefit by seed dispersal. It prevents competition between the plant and its own seedlings for sunlight, water and minerals. It also enables the plants to invade new habitats for wider distribution.

Seeds and fruits of plants are carried away by wind, water and animals. Winged seeds such as those of drumstick and maple [Fig. 12.13 (a) and (b)], light seeds of grasses or hairy seeds of aak (Madar) and hairy fruit of sunflower [Fig. 12.14 (a), (b)], get blown off with the wind to far away places. Some seeds are dispersed by water. These fruits or seeds usually develop floating ability in the form of spongy or fibrous outer coat as in coconut. Some seeds are dispersed by animals, especially spiny seeds with hooks which get attached to the bodies of animals and are carried to distant places. Examples are Xanthium (Fig. 12.15) and Urena.

Some seeds are dispersed when the fruits burst with sudden jerks. The seeds are scattered far from the parent plant. This happens in the case of castor and balsam. 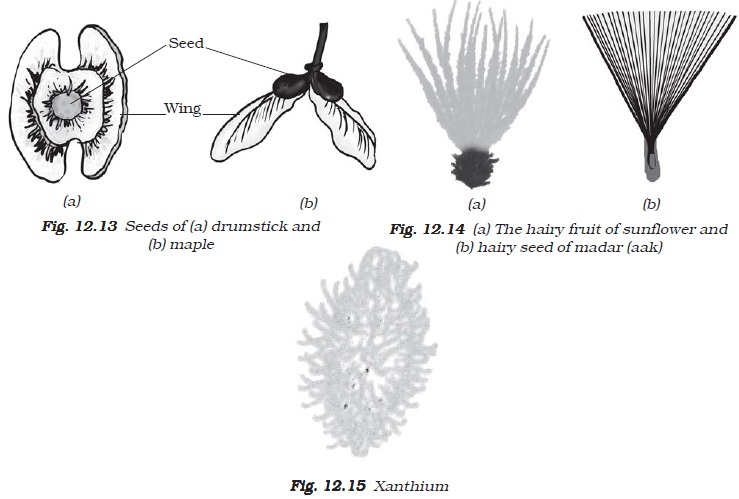 2. Describe the different methods of asexual reproduction. Give examples.

3. Explain what you understand by sexual reproduction.

4. State the main difference between asexual and sexual reproduction.

5. Sketch the reproductive parts of a flower.

6. Explain the difference between self-pollination and cross-pollination.

7. How does the process of fertilisation take place in flowers?

8. Describe the various ways by which seeds are dispersed.

1. Make your own cactus garden by collecting pieces cut from different kinds of cacti. Grow the variety in one single flat container or in
separate pots.

2. Visit a fruit market and collect as many local fruits as possible. If many fruits are not available, you can collect tomatoes and cucumbers (these are fruits, though we use them as vegetables). Make drawings of the different fruits. Split the fruits and examine the seeds within. Look for any special characteristics in the fruits and their seeds. If possible visit the website:

You can visit a library also to learn about this.

3. Think of ten different fruit-bearing plants. Remember that many vegetables are also fruits of the plants. Discuss with your teacher, parents, farmers, fruit growers and agricultural experts (if available nearby) and find out the manner of their dispersal. Present your data in the form of a table as shown below:

4. Suppose there is one member of a particular kind of organism in a culture dish, which doubles itself in one hour through asexual reproduction. Work out the number of members of that kind of organism which will be present in the culture dish after ten hours. Such a colony of individuals arising from one parent is called a “clone”.