Substances that allow electric current to pass through them are known as conductors.

Substances which allow the electric current to pass through them by the movement of electrons are called metallic conductors, e.g.. metals.

Substances which allow the passage of electricity through their fused state or aqueous solution and undergo chemical decomposition are called electrolytic conductors, e.g., aqueous solution of acids. bases and salts.

Electrolytes are of two types: 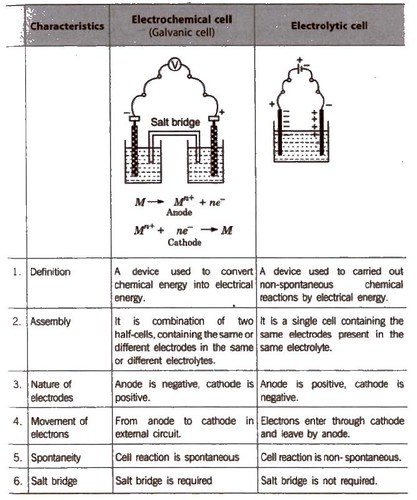 General Representation of an Electrochemical Cell

Other features of the electrochemical cell are

An electrochemical cell of zinc and copper metals is known as Daniell cell. It is represented as 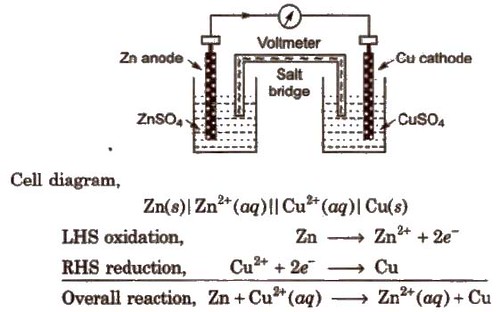 By convention cathode is represented on the RHS and anode on the LHS.

When an electrode is in contact with the solution of its ions in a half-cell, it has a tendency to lose or gain electrons which is known as electrode potential. It is expressed in volts. It is an intensive property, i.e., independent of the amount of species in the reaction.

It is denoted by E°. 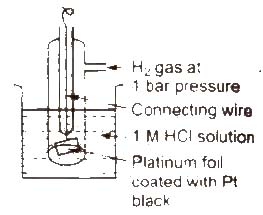 In SHE. at the surface of plantinum, either of (he following reaction can take place

The electrode potential of SHE has been fixed as zero at all temperatures.

Its main drawbacks are

Hence, calomel electrodes are conveniently used as reference electrodes, It consists of mercury in contact with Hg2 Cl2 (calomel) paste in a solution of KCl.

Electromotive Force (emf) of a Cell

It is the difference between the electrode potentials of two half-cells and cause flow of current from electrode at higher potential to electrode at lower potential. It is also the measure of free energy change. Standard emf of a cell,

It is the arrangement of electrodes in the increasing order of their standard reduction potentials. 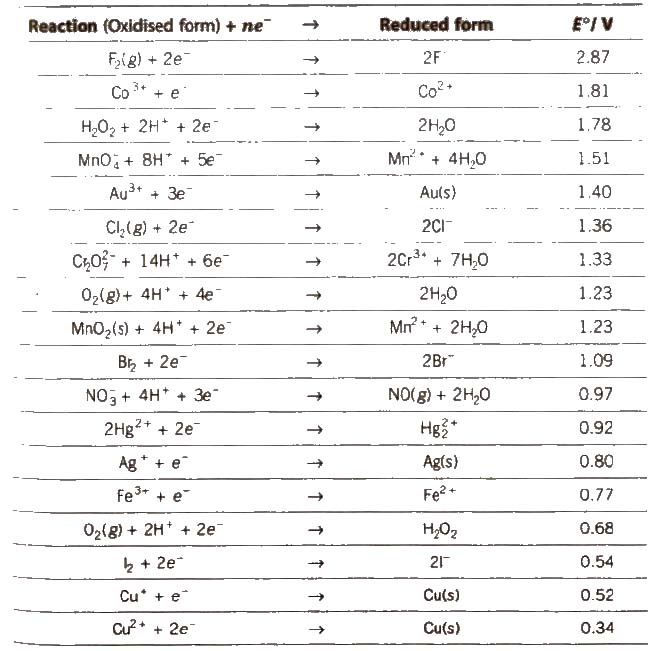 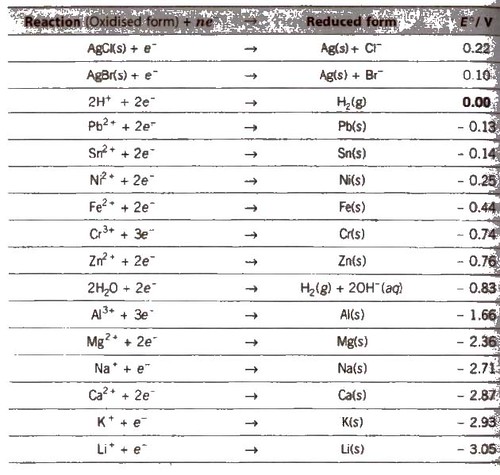 1. The lower the value of E°, the greater the tendency to form cation.

4. Reducing character increases down the series.

5. Reactivity increases down the series.

6. Determination of emf; emf is the difference of reduction potentials of two half-cells.

If the value of emf is positive. then reaction take place spontaneously, otherwise not.

8. A negative value of standard reduction potential shows that it is the site of oxidation.

9. Oxides of metals having E°red ≥ 0.79 will be decomposed by heating to form O2 and metal.

The relationship between the concentration of ions and electrode potential is given by Nernst equation.

For a electrochemical cell,

Concentration of pure solids and liquids is taken as unity.

(i) Electrode concentration cells Two hydrogen electrodes or different pressures are dipped In the same solution of electrolyte,

It is the ease of flow of electric current through the conductor. It is reciprocal of resistance (R).

It is the reciprocal of specific resistance.

Specific conductivity decreases on dilution. This is because concentration of ions per cc decreases upon dilution.

The conductivity of all the ions produced when 1 mole of an electrolyte is dissolved in V mL of solution is known as molar conductivity.

It is related to specific conductance as

The conducting power of all the ions produced when 1 g-equivalent of an electrolyte is dissolved in V mL of solution, is called equivalent conductivity. It is related to specific conductance as

where, b is a constant. It depends upon the nature of solvent and temperature.

(i) Nature of electrolyte The strong electrolytes like KNO3 KCl. NaOH. etc. are completely ionised in aqueous solution and have high values of conductivity (molar as well as equivalent).

The weak electrolytes are ionised to a lesser extent in aqueous solution and have lower values of conductivity (molar as well as equivalent) .

ii) Concentration of the solution The concentrated solutions of strong electrolytes have SIgnificant interionic attractions. which reduce the speed of ions and lower the value of Λm. and Λeq.

The dilution decreases such attractions and increase the value of Λm and Λeq. 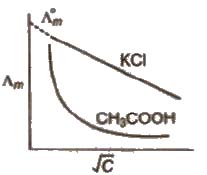 The limiting value, Λ0m or Λ∞m. (the molar conductivity at zero concentration (or at infinite dilution) can be obtained extrapolating the graph.

(iii) Temperature The increase of temperature decreases inter-ionic attractions and increases kinetic energy of ions and their speed. Thus, Λm and Λeq increase with temperature.

At infinite dilution, the molar conductivity of an electrolyte is the sum of the ionic conductivities of the cations and anions, e.g., for AxBy.

(i) Determination of equivalent/molar conductivities of weak electrolytes at infinite dilution, e.g.,

(ii) Determination of degree of dissociation (α) of an electrolyte at a given dilution.

where, α is the degree of dissociation of the electrolyte.

(iii) Salts like BaSO4 .., PbSO4‘ AgCl, AgBr and AgI which do not dissolve to a large extent in water are called sparingly soluble salts.

The solubility of a sparingly soluble salt can be calculated as

It is the process of decomposition of an electrolyte when electric current is passed through either its aqueous solution or molten state,

How to Predict the Products of Electrolysis?

Discharge potential is defined as the minimum potential that must be applied acrossthe electrodes to bring about the electrolysis and subsequent discharge of the ion on the electrode.

The amount of the substance deposited or liberated at cathode directly proportional to the quantity of electricity passed through electrolyte.

Thus, electrochemical equivalent I” the amount of the substance deposited or liberated by passing 1A current for 1 sec (i.e.. 1 coulomb, I x t = Q)

When the same quantity of electricity is passed through different electrolytes. the amounts of the substance deposited or liberated at the electrodes arc directly proportional to their equivalent weights, Thus,

These are source of electrical energy which may have one or more cells connected in series. For a good quality battery it should be reasonably light. compact and its voltage should not vary appreciably during its use.

In the primary batteries. the reaction occurs only once and after use over a period of time battery becomes dead and cannot be reused again.

(i) Dry cell or Leclanehe cell

These cells can be recharged and can be used again and again, e.g.,

Cathode-Grid of lead packed with PbO2

When recharged the cell reactions are reversed.

Galvanic cells which use energy of combustion of fuels like H2, CH4, CH3OH, etc., as the source to produce electrical energy are called fuel cells. The fuel cells are pollution free and have high efficiency.

Electrodes-Made of porous graphite impregnated with catalyst (Pt, Ag or a metal oxide).

Electrolyte-Aqueous solution of KOH or NaOH

Oxygen and hydrogen are continuously fed into the cell.

Slow formation of undesirable compounds such as oxides, sulphides or carbonates at the surface of metals by reaction with moisture and other atmospheric gases is known as corrosion.

An electrochemical cell, also known as corrosion cell, is developed at the surface of iron. 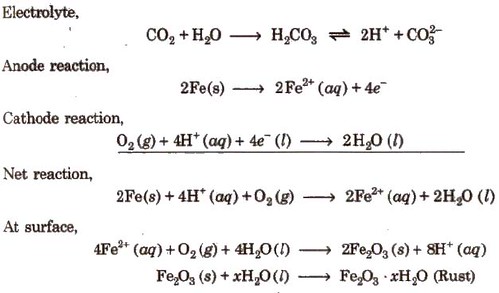 Rusting of iron can be prevented by the following methods :