Surface Chemistry is the branch of chemistry which deals with the phenomenon that occurs on the surfaces or interfaces, such phenomenon includes corrosion. catalysis, crystallisation, etc

Charcoal, silica gel, metals such as Ni, Cu, Ag, Pt and colloids are some adsorbents.

1. It is specific and selective in nature.
2. Adsorption is spontaneous process, therefore change in free energy (ΔG)is negative.

For the negative value of ΔG,in a system, in which randomness decreases, ΔH must be negative. Hence, adsorption is always exothermic.

Adsorption of hydrogen over Pt is called occlusion.

It is a process of removing an adsorbed substance from a surface on which it is adsorbed, is known as desorption.

Distinction between Adsorption and Absorption

It is a process in which both adsorption and absorption take place simultaneously, the term sorption is simply used.

When the concentration of the adsorbate is more on the surface of the adsorbent than in the bulk, it is called positive adsorption.

Distinction between Physisorption and Chemisorption

(a) Nature of adsorbent Same gas may be adsorbed to different extents on different adsorbent.

(b) Surface area of the adsorbent Greater the surface area, greater is the extent of adsorption.

(c) Nature of the gas being adsorbed Greater is the critical temperature of a gas, greater are the van der Waals’ forces of attraction and thus, greater is the adsorption.

(d) Temperature Adsorption is an exothermic process involving the equilibrium :

(e) Pressure Adsorption increases with pressure at constant temperature. The effect is large if temperature is kept constant at low value.

It is the plot of the mass of gas adsorbed per gram of adsorbent (x / m) versus equilibrium pressure at constant temperature.

It gave an empirical relationship between the quantity of gas adsorbed by unit mass of solid adsorbent and pressure at a particular temperature. It can be expressed by the equation. 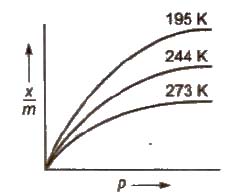 Taking logarithm of Eq. (i)

where, C is the equilibrium concentration. On taking logarithm of the above equation, we have

According to Langmuir, the degree of adsorption is directly ProPOrtional to e, i.e., the fraction of surface area occupied. 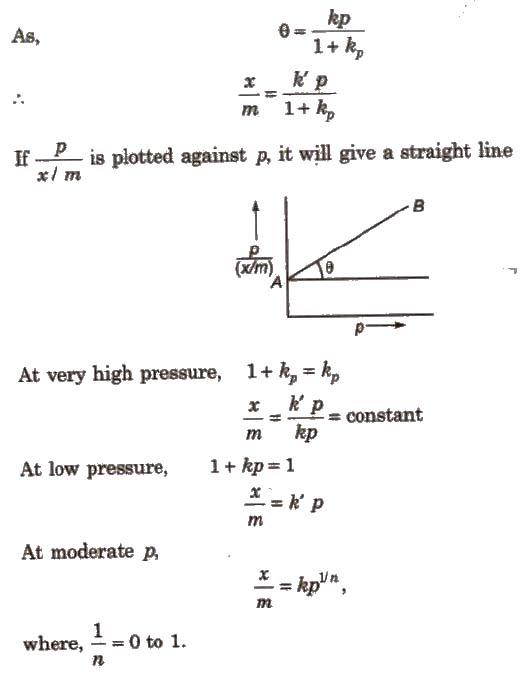 These are plots of x / m us temperature t at constant pressure. For physical and chemical adsorption, they are shown below. 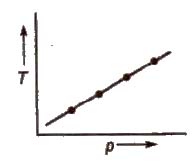 (a) Homogeneous catalysis In this catalysis, and the catalyst reactants are in the same physical state [phase], e.g.,

(c) Autocatalysis When one of the product of a reaction acts as catalyst, the process is called autocatalysis.

1 The catalyst remains unchanged in mass and chemical composition.
2. In case of reversible reactions, the catalyst does not influence the composition of reaction mixture at equilibrium. It only helps to attain the equilibrium quickly. 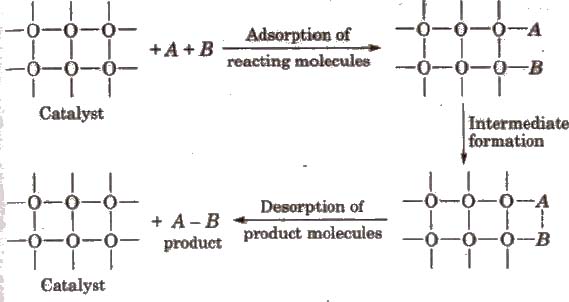 (i) Activity The activity of a catalyst depends upon the strength of chemisorption to a large extent. The adsorption should be reasonably strong but not so strong that they become immobile and no space is available for other reactants to get adsorbed.

(ii) Selectivity The selectivity of a catalyst is its ability to direct a reaction to yield a particular product, e.g., starting with Hz and CO using different catalysts, we get different products.

An important zeolite catalyst used in the petroleum industry is ZSM-S.lt converts alcohols directly into gasoline.

Enzymes are complex nitrogenous organic compounds which are Produced by living plants and animals. They are actually protein molecules of high molecular mass and form colloidal solutions in water.

They are also known as biochemical catalysis. 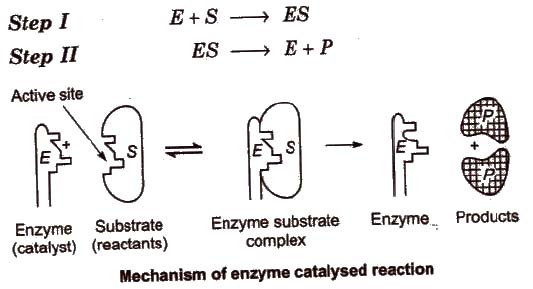 Some examples of enzyme catalysed reactions are:

(Source of invertase, zymase and maltose is yeast and that of diastase is malt. Soybean is the source of urease.)

(vi) Lactobacilli is used to convert milk into curd.