You might have tried the game ‘How steady is your hand?’ suggested in Chapter 12 of Class VI. If not, you may try it out now. Paheli and Boojho had also set up the game by connecting an electric circuit as suggested in Class VI. They had lots of fun trying it out with their families and friends. They enjoyed it so much that they decided to suggest it to a cousin of theirs who stayed in a different town. So, Paheli made a neat drawing showing how the various electric components were to be connected (Fig.14.1). 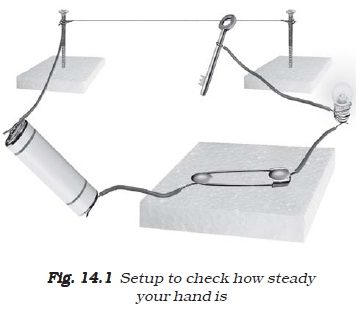 Can you draw this circuit conveniently? It made Boojho wonder if there was an easier way to represent these electric components.

In Table 14.1, a battery and its symbol are also shown. Do you know what a battery is?

Look at the symbol of a battery. Can you make out what a battery could be? For some of the activities we may need more than one cell. So, we connect two or more cells together as shown in Fig.14.2. Notice

Many devices such as torches, transistors, toys, TV remote controls, use batteries. However, in some of these devices the electric cells are not always placed one after the other as shown in Fig. 14.2. Sometimes the cells are placed side by side. Then how are the terminals
of the cells connected? Look carefully inside the battery compartment of any device. There is usually a thick wire or a metal strip connecting the positive terminal of one cell to the negative terminal of the next cell (Fig.14.3). In order to help you to place the cells
correctly in the battery compartment, ‘+’ and ‘–’ symbols are usually printed there.

How can we connect the cells to prepare batteries for our activities? You may make a cell holder, as shown in Fig.14.4, using a wooden block, two iron strips and rubber bands. It is necessary 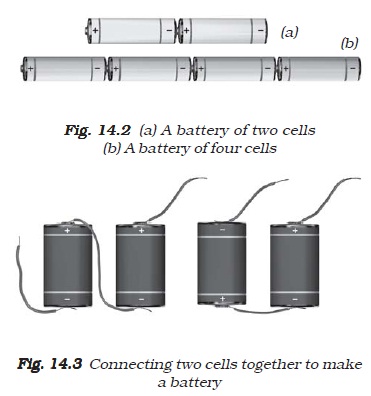 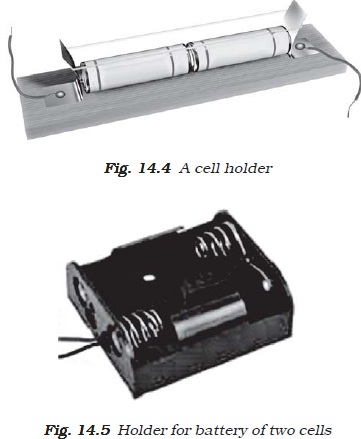 that the rubber bands hold the metal strips tightly.

You could also buy cell holders from the market for making batteries of two or more electric cells. Place the cells in them properly, such that the positive 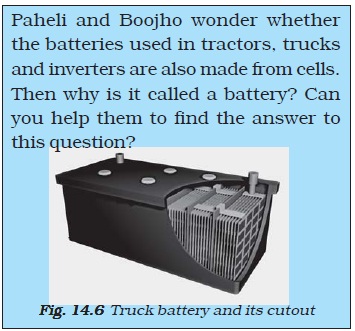 terminal of one cell is connected to the negative terminal of the next cell. Connect a piece of wire each to the two metal clips on the cell holder as shown in Fig.14.5. Your battery is ready for use.

The symbol used for representing a battery is shown in Table.14.1. It has three cells. Therefore, it has three pairs of long and short parallel lines.

Let us now draw a circuit diagram of an electric circuit using symbols shown in Table 14.1.

Is your diagram similar to the one shown in Fig. 14.8?

Fig. 14.9 shows another circuitdiagram. Is it identical to the circuit  diagram shown in Fig.14.8? In which way is it different? 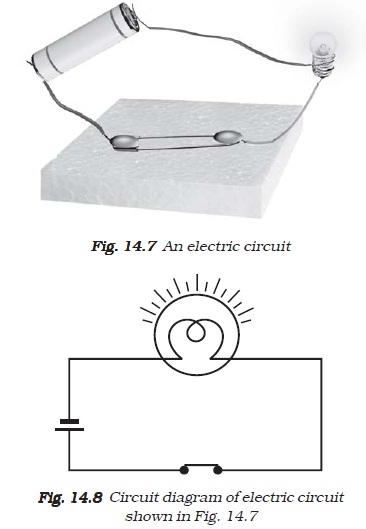 In the bulb there is a thin wire, called the filament, which glows when an 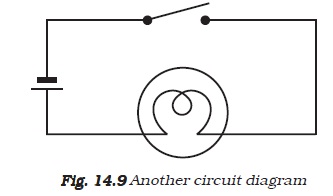 electric current passes through it. When the bulb gets fused, its filament is broken.

Never touch a lighted electric bulb connected to the mains. It may be very hot and your hand may get burnt badly. Do not experiment  zith the electric supply from the mains or a generator or an inverter. You may get an electric shock, which may be dangerous. Use only electric cells for all the activities suggested here.

If the filament of the bulb is broken, would the circuit be complete? Would the bulb still glow?

You might have noticed that a glowing electric bulb become warm. Do you know why?

Make a circuit as shown in Fig.14.10. Take about 10 cm long piece of nichrome wire and tie it between the nails. (You can get nichrome wire from an electric repair shop or you can use a piece of discarded coil of an electric heater.) Touch the wire. Now switch on the current in the circuit by moving the switch to the ‘ON’ position. After a few 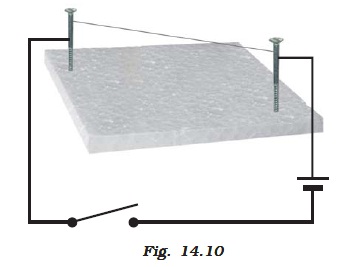 Do not keep the switch in the ‘ON’ position for a long time, otherwise the cell may become weak very quickly.

seconds touch the wire. (Do not hold it for a long time.) Switch off the current. Touch the wire again after a few minutes. 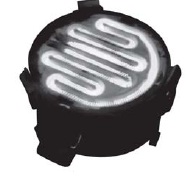 You might have seen an electric room heater or an electric heater used for cooking. All these contain a coil of wire. This coil of wire is called an element. You may have noticed that when these appliances are switched on 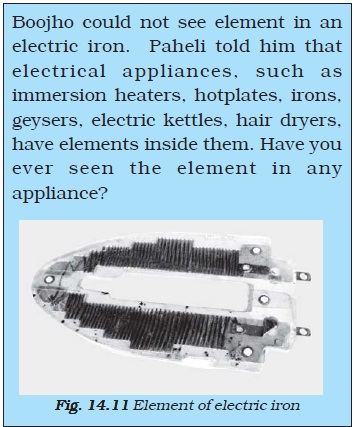 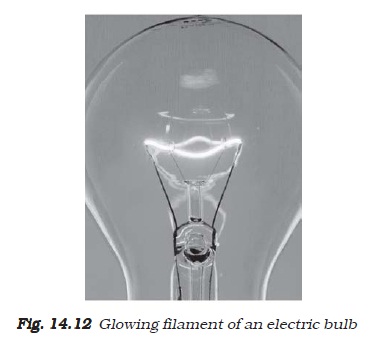 after connecting to the electric supply, their elements become red hot and give out heat.

The amount of heat produced in a wire depends on its material, length and thickness. Thus, for different requirements, the wires of different materials and different lengths and thicknesses are used.

The wires used for making electric circuits do not normally become hot. On the other hand, the elements of some electric appliances become so hot that they are easily visible. The filament of an electric bulb gets heated to such a high temperature that it starts glowing.
If a large current passes through a wire the wire may become so hot that it may even melt and break. But is it possible for a wire to melt and break?

Let us check it out.

Make the circuit we used for Activity 14.3 again. However, replace the cell with a battery of four cells. Also, in place of 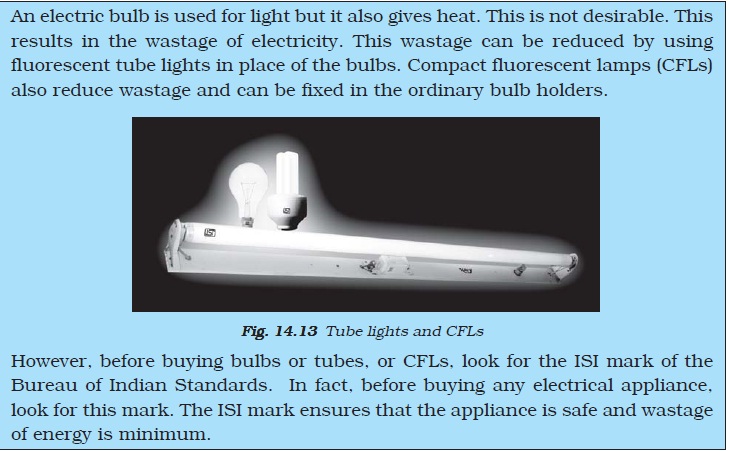 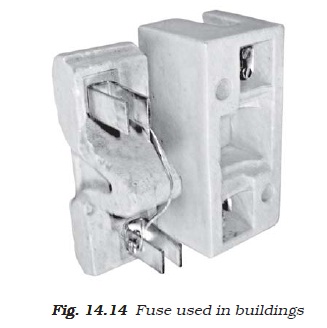 Wires made from some special materials melt quickly and break when large electric currents are passed through them. These wires are used for making electric fuses (Fig.14.14). In all buildings fuses are inserted in all electrical circuits. There is a maximum limit on the current which can safely flow through a circuit. If by accident the current exceeds this safe limit, the wires may become overheated and may cause fire. If a proper fuse is there in the circuit, it will blow off and break the circuit. A fuse is thus a safety device which prevents damages to electrical circuits and possible fires. 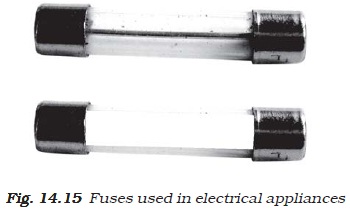 Fuses of different kinds are used for different purposes. Fig. 14.14 shows fuses used in our houses. Fuses shown in Fig. 14.15 are generally used in electrical appliances.

Never try to investigate an electric fuse connected to mains circuit on your own. You may, however, visit an electric repair shop and compare the burnt out fuses with the new ones.

One reason for excessive currents in electrical circuits is the direct touching of wires. This may happen if the insulation on the wires has come off due to wear and tear. This may cause a short circuit. Another reason for excessive current can be the connection of many devices to a single socket. This may cause overload in the circuit. You might have read reports in newspapers about fires caused by short circuits and overloads.

Always, use proper fuses which have been specified for particular applications, carrying ISI mark. Never use just any wire or strip of metal in place of a fuse.

Repeat the experiment a few times. What does this experiment indicate?

We know that the needle of a compass is a tiny magnet, which points in north-south direction. When we bring a magnet close to it, the needle gets deflected. We have also seen that 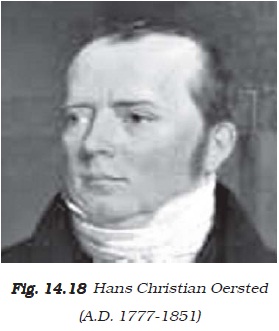 This is what a scientist called Hans Christian Oersted (Fig. 14.18) also wondered. He was the first person who noticed the deflection of compass needle every time the current was passed through the wire.

Take around 75 cm long piece of insulated (plastic or cloth covered or enamelled) flexible wire and an iron nail, say about 6–10 cm long. Wind the wire tightly around the nail in the form of a coil. Connect the free ends of the wire 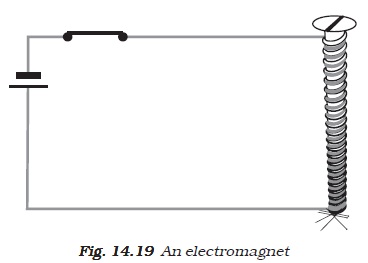 Remember not to switch on the current for more than a few seconds at a time. The electromagnet weakens the cell quickly if left connected.

to the terminals of a cell through a switch as shown in Fig 14.19. Place some pins on or near the end of the nail. Now switch on the current.

We are quite familiar with an electric bell. It has an electromagnet in it. Let us see how it works. 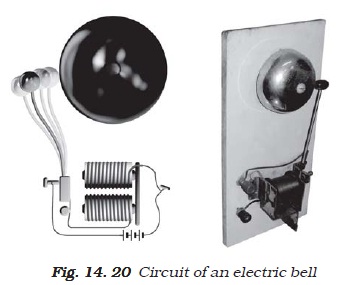 The coil is no longer an electromagnet. It no longer attracts the iron strip. The iron strip comes back to its original position and touches the contact screw again. This completes the circuit. The current flows in the coil and the hammer strikes the gong again. This process is repeated in quick succession. The hammer strikes the gong every time the circuit is completed. This is how the bell rings. 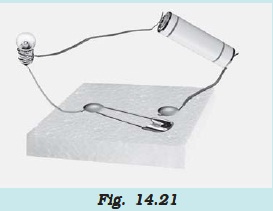 3. Fig.14.22 shows four cells fixed on a board. Draw lines to indicate how you will connect their terminals with wires to make a battery of four cells.

4. The bulb in the circuit shown in Fig.14.23 does not glow. Can you identify the problem? Make necessary changes in the circuit to make the bulb glow. 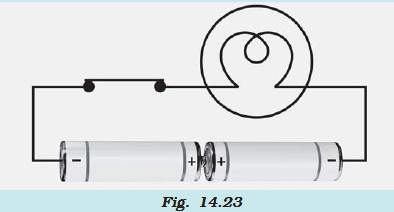 6. When the current is switched on through a wire, a compass needle kept nearby gets deflected from its north-south position. Explain.

7. Will the compass needle show deflection when the switch in the circuit shown by Fig.14.24 is closed? 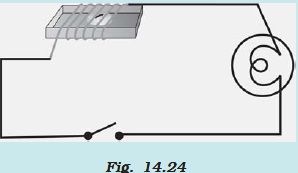 (b) When the electric current through the fuse exceeds a certain limit, the fuse wire melts and breaks. (T/F)

(c) An electromagnet does not attract a piece of iron. (T/F)

(d) An electric bell has an electromagnet. (T/F)

10. Do you think an electromagnet can be used for separating plastic bags from a garbage heap? Explain.

11. An electrician is carrying out some repairs in your house. He wants to replace a fuse by a piece of wire. Would you agree? Give reasons for your response.

12. Zubeda made an electric circuit using a cell holder shown in Fig. 14.4, a switch and a bulb. When she put the switch in the ‘ON’ position, the bulb did not glow. Help Zubeda in identifying the possible defects in the circuit. 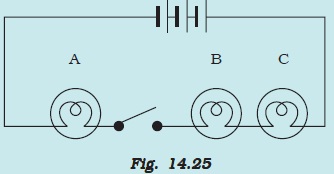 (i) Would any of the bulb glow when the switch is in the ‘OFF’ position?

(ii) What will be the order in which the bulbs A, B and C will glow when the switch is moved to the ‘ON’ position?

1. Set up the circuit shown in Fig. 14.17 again. Move the key to ‘ON’ position and watch carefully in which direction the compass needle
gets deflected. Switch ‘OFF’ the current. Now keeping rest of the circuit intact, reverse the connections at the terminal of the cell. Again switch ‘on’ the current. Note the direction in which the needle gets deflected. Think of an explanation.

The audience, including Paheli and Boojho, were very impressed with the show and felt that the magician had some supernatural powers. However, after reading this chapter Paheli is wondering if the trick was indeed some magic or some science was involved? Can you guess what science might be involved?

3. Using an electromagnet, you can make a working model of a railway signal as shown in Fig.14.26. 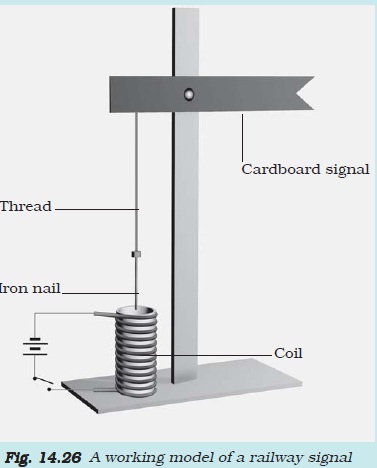 4. Visit an electric shop. Request a mechanic to show you the various types of fuses and MCB and to explain how they work.