The branch of chemistry, which deals with the rate of chemical reactions. the factors affecting the rate of reactions and the mechanism of the reaction. is called chemical kinetics.

Chemical Reactions on the Basis of Rate of Reaction

Rate of a chemical reaction IS the change in the concentration of any one of the reactants or products per unit time. It is expressed in mol L-1 s-1 or Ms-1 or atm time-1 units.

= (decrease/increase in the concentration of reactant/product/time taken) 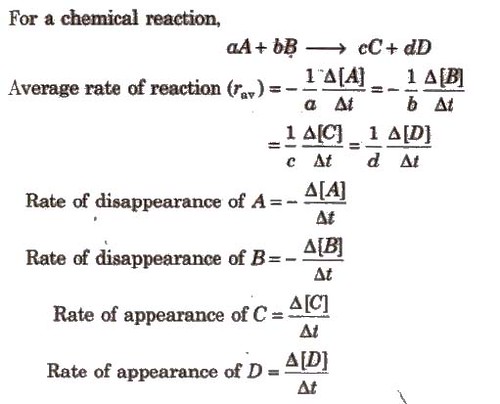 Rate of a chemical reaction at a particular moment of time, is known as instantaneous rate of reaction.

Slowest step of a reaction was called rate determining step by van’t Hoff.

According to the law of mass action,

where, [A] and [B] molar concentrations of A and B respectively and k is the velocity constant or rate constant. The above expression is known as rate law.

In the above expression, k is called rate constant or velocity constant.

Rate constant may be defined as the specific rate of reaction when the molar concentrations of the reactants is taken to be unity, i.e., 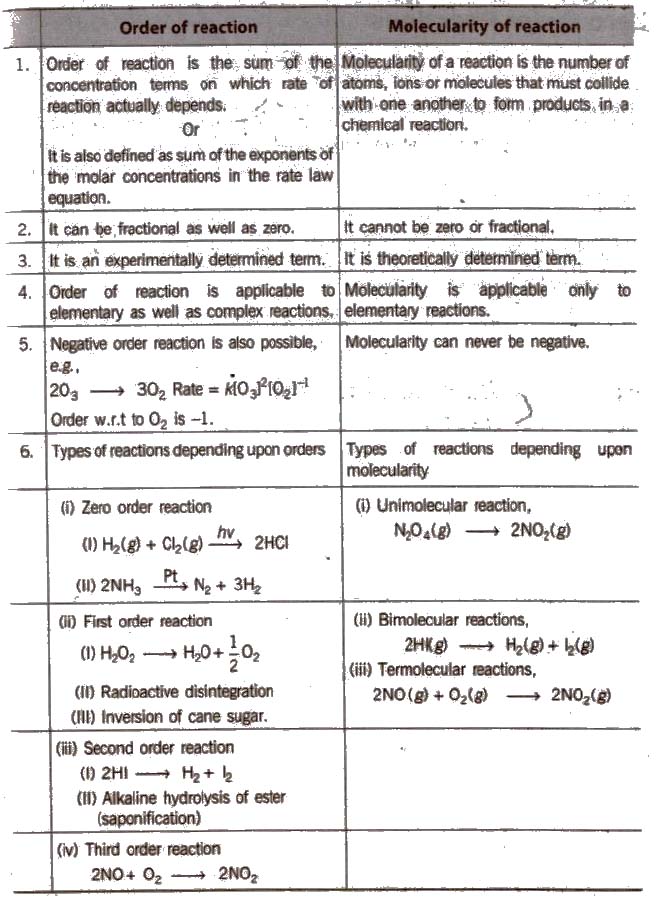 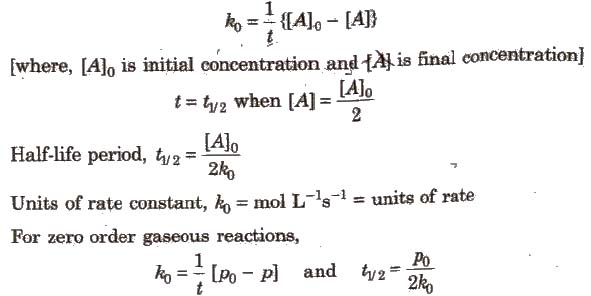 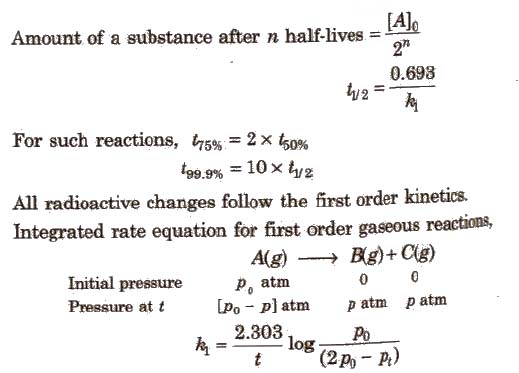 (Vo, Vt, and ∞ are the volumes of NaOH solution used for the titration of same volume of the reaction mixture after times 0, t and ∞ respectively.)

Chemical reactions which appear to be of higher order but actually are of the lower order are called pseudo order reactions. In case of pseudo first order reaction, chemical reaction between two sr” stances takes place and one of the reactant is present in execess. e.g., hydrolysis of ester.

Methods to Determine Order of Reaction

(ii) Initial rate method In this method, the order of a reaction is determined by varying the concentration of one of the
reactants while others are kept constant.

(iii) Integrated rate law method In this method out different integrated rate equation which gives the most constant value for the rate constant corresponds to a specific order of reaction.

This method is employed only when the rate law involved only one concentration term.

(v) Ostwald’s isolation method This method is employed in determining the order of complicated reactions by isolating one
of the reactants so far as its influence on the reaction rate is concerned.

Temperature Dependence of Rate of a Reaction

For every 10°C rise in temperature, the rate of reaction becomes double, but only 16% collisions increases. It can be explained by Arrhenius equation.

Temperature coefficient is the ratio of rate constant of a reaction at two temperature differing by 10. Temperature selected are usually 298 K and 308 K

Arrhenius equation is a mathematical expression to give a quantitative relationship between rate constant and temperature, and the expression is

where, A = frequency or Arrhenius factor. It is also called pre-exponential factor

Activated complex is the highest energy unstable intermediate between the reactants and products and gets decomposed immediately (having very short life), to give the products. In this state, bonds of reactant are not completely broken while the bonds of products are not completely formed. 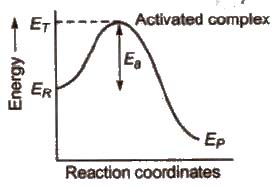 Threshold energy (ET) The minimum amount of energy which the reactant must possess in order to convert into products is known as threshold energy.

Activation energy (Ea) The additional amount of energy, required by the reactant so that their energy becomes equal to the threshold value is known as activation energy.

Lower the activation energy, faster is the reaction.

Different reactions have different rates because their activation energies are different.

(iii) Ea is constant for a particular reaction.

(iv) Ea does’t depend on temperature, volume, pressure, etc., but gets affected by catalyst.

In the Arrhenius equation, when T → ∞ then ℜ = Ae° = A when Ea = 0,k = A and the rate of reaction becomes independent temperature.

Role of Catalyst in a Chemical Reaction

A catalyst is a chemical substance which alters the rate of a reaction WIthout itself undergoing any permanent chemical change.

In the chemical reactions, catalyst provides an alternate pathway or reaction mechanism by reducing the activation energy between reactants and products and hence. lowering the potential energy barrier as shown.

In the presence of catalyst, activation energy decreases and hence.

According to this theory, the reactant molecules are assumed to be hard spheres and the reaction is postulated to occur, when molecules collide with each other.

But only those collisions in which the colliding species are associated with certain minimum amount of energy and collide in proper orientation result in the product formation, such collisions are called fruitful collisions or effective collision.

where, ZAB represents the collision frequency of reactants, A and B e-Ea/RT represents the fraction of molecules with energies equal to or greater than Ea.

So, to account for effective collisions, another factor, P called the probability or steric factor is introduced.

Quantum yield or quantum efficiency of a photochemical reaction,