Earth crust is the source of many elements. Out of these elements, 70% are metals. Aluminium is the most abundant metal of earth crust and iron comes second. The percentage of different elements in earth crust are

Metals occur in two forms in nature (i) in native state (ii) in combined state, depending upon their chemical reactivities.

Elements which have low chemical reactivity or noble metals having least electropositive character are not attacked by oxygen. moisture and CO2 of the air. These elements, therefore, occur in the free state or in the native state, e.g., Au, Ag, Pt, S, O, N, noble gases, etc.

Hydrogen is the only non-metal which exists in oxidised form only.

The naturally occurring substances in the form of which the metals occur in the earth crust are called minerals.

Every mineral is not suitable for the extraction of the metal. The mineral from which the metal is economically and conveniently extracted is called an ore.

Thus, all ores are minerals but all minerals are not ores. 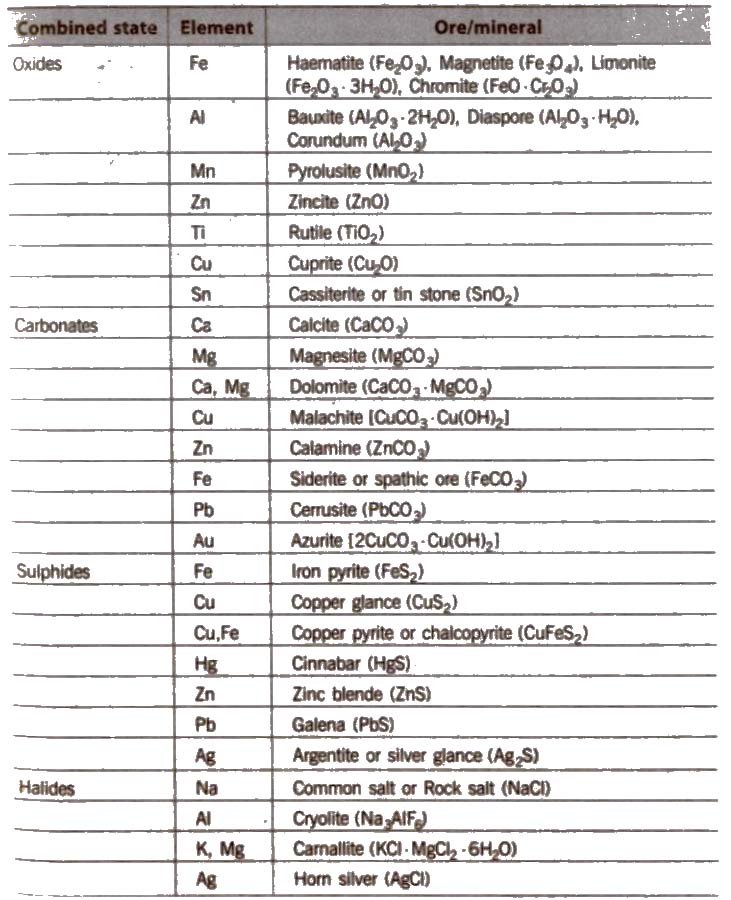 Impurities associated with ores are called gangue or matrix.

The entire scientific and technological process used for isolation of the metal from its ores is known as metallurgy.

Following steps are involved in the metallurgy : 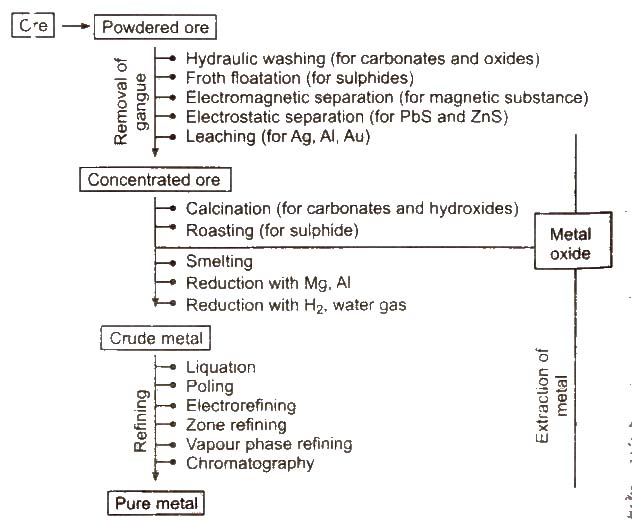 Crushing of the Ore

Removel of unwanted materials (e.g., sand. clays, etc.) from the ore is known as ore concentration, ore dressing or ore benefaction. It can be carried out by various ways depending upon the nature of the ore.

The process by which lighter earthy impurities are removed from the heavier ore particles by washing WIth water is called levigation. The lighter impurities are washed away. Thus. this method is based on the difference in the densities (specific gravities) of ore and gangue.

This method is commonly used for oxide ores such as haematite, tin stone and native orcs of Au, Ag, etc.

The froth can be stabilised by the addition of stabilisers (aniline or cresols).

Activator They activate the floating property of one of the component of the ore I and help in the separation of different minerals present in the same ore (CuSO4 is used as activator.

Depressants These are used to prevent certain types of particles from forming the froth with air bubbled, e.g., NaCN can be used as a depressant in the separation of ZnS and PbS ores. KCN is an another depressant.

This method of concentration is employed when either the ore or the lmpurities associated with it are magnetic in nature. e.g., chromite, FeCr2O4, containing magnetic SiliCIOUS gangue and wolframite FeWO4, Containing cassiterite, 8nO4 (non-magnetic impurities) can be separated by this method.

Leaching is the process in which the ore is concentrated by chemical reaction with a suitable reagent which dissolves the ore but not the impurities, e.g., bauxite is leached with a hot concentrated solution of NaOH which dissolves aluminium while other oxides (Fe2O3, TiO2, SiO2), remain undissolved and noble metals (Ag and Au) are leached with a dilute aqueous solution of NaCN or KCN in the presence of air.

(i) Calcination It is the process of converting an ore into its oxides by heating it strongly, below its melting point in a limited supply of air or in absence of air.

During calcination, volatile impurities as well as organic matter and moisture are removed.

Calcination is used for metal carbonates and hydroxides and is carried out in reverberatory furnace.

(ii) Roasting It is the process of converting an ore into its metallic oxide by heating it strongly. below its melting point m excess of air. This process is commonly used for sulphide ores and is carried out in blast furnace or reverberatory furnace. Roasting helps to remove the non-metallic impurities and moisture.

The furnaces used in calcination and roasting employ refractory materials which resist high temperature and do not become soft.

Reduction of the Oxides to Metal

The roasted or the calcined ore is then converted to the free metal by reduction. Reduction method depends upon the activity of metal.

(i) Smelting (reduction with carbon) The process of extracting the metal by fusion of its oxide ore with carbon (C) or CO is called smelting. It is carried out in a reverberatory furnace.

In the extraction of Cu and Fe, the slag obtained are respectively FeSiO3 and CaSiO3.

The obtained slag is used in road making as well as in the manufacturing of cement and fertilizers.

(ii) Reduction by hydrogen It is done for W or Mo oxide.

iii) Reduction by aluminium It is known as alumino thermic reduction or Gold Schmidt thermite process. Aluminium powder is used for this purpose.

Mixture of the oxide and Al i.n the ratio of 3 : 1 is known as thermite and mixture of BaO2 + Mg powder acts as ignition powder.

(iv) Auto reduction This is used for reduction of sulphide ores of Pb, Hg, Cu, etc. The sulphide ore is heated in a supply of air at 770-970 K when the metal sulphide is partially oxidised to form its oxide or sulphate which then reacts with the remaining sulphide to give the metal.

vi) Electrolytic reduction or electrometallurgy It is the process of extracting highly electropositive (active) metals such as Na, K, Ca, Mg, Al, etc by electrolysis of their oxides, hydroxides or chlorides in fused state, e.g., Mg is prepared by the electrolysis of fused salt of MgCl2 (Dow’s process).

Thermodynamic Principle in Extraction of Metals

The free energy change (ΔG) occurring during the reduction processes help in deciding the suitable method for reduction.

For the spontaneous reduction of an oxide, halide or sulphide by an element, the essential condition is that there is a decrease in the free energy of the system (-ve ΔG).

More the negative value of ΔG, the higher is the reducing power of an element. ΔG can be given as

For the reduction of a metal oxide with a reducing agent, the plot of ΔG° against temperature is studied, which is called Ellingbam diagram. 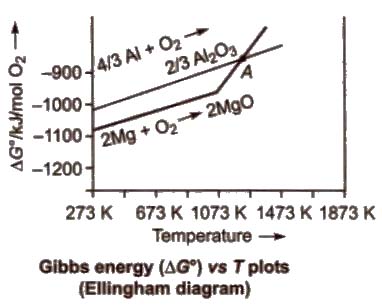 2. A metal will reduce the oxide of other metals which lie above it in Ellingham diagram, i.e., the metals for which the free energy of formation (ΔG°f) of their oxides is more negative can reduce those metal oxides which has less negative ΔG°f

Thus, AI reduces FeO, CrO and NiO in thermite reduction but it will not reduce MgO at temperature below 1773 K.

Refining or Purification of Crude Metals

(i) Liquation This method is used for refining the metals having low melting points (such as Sn. Pb, Hg, Bi) than the impurities, The impure metal is placed on the sloping hearth and is gently heated. The metal melts and flows down leaving behind the non-fusible impurrties.

(ii) Distillation This is useful for low boiling metals such as Zn, Hg. The impure liquid metal is evaporated to obtain the pure metal as distillate.

This method is used when impure metal contains impurities of other metals which form volatile oxides.

e.g., traces of lead ore removed from silver (as volatile PbO) by this process.

(i) Poling This method is used when the impure metal contains impurities of Its own oxide, e.g., CU2O in blister copper and SnO2 in impure Sn. The molten impure metal is stirred with green wood poles. At this high temperature. wood liberates gases such as CH4 which reduces any oxides present in the metal.

In this method, impure metal forms the anode while the cathode is a rod or sheet of pure metal. The electrolytic solution consists of a soluble salt of the metal.

On passing electricity, the pure metal gets deposited on the cathode while the insoluble impurities settle down below the anode as anode mud or anode sludge. Metals like Cu, Ag, Au, Cr, Zn, Ni, etc are purified by this method.

(iii) Zone-refining This method is based upon the principle of fractional crystallisation, i.e., difference in solubilities of impurities in molten and solid state of metal. Semiconductors like silicon, germanium, gallium arsenide and indium antimonide are purified by this method. Elements of very high purity are obtained by this method.

(b) Mond’s process It is used for refining of nickel.

(v) Chromatographic method Adsorption chromatography is generally used. The impure metal is dissolved in a suitable solvent and the solution is allowed to run slowly into an adsorbent column packed with alumina (Al2O3). The metal and the impurities present are adsorbed at different rates. These are then eluted with suitable eluent (solvent). In this method.

Occurrence and Extraction of Some Metals

Neutral flux is the neutral compound added to the ore to decrease its melting point and to make it conducting, e.g., CaF2, cryolite (Na3AlF6) etc.

Common method of extraction Reduction of the oxide with CO and coke in blast furnace.

The iron obtained from blast furnace contains about 4% carbon and many impurities in smaller amount (e.g., S, P, Si, Mn) and is known as pig iron.

Cast iron is different from pig iron and is made by melting pig iron with scrap iron and coke using hot air blast. It has slightly lower carbon content (about 3%) and is extremely hard and brittle.

Wrought iron or malleable iron is the purest form of commercial iron and is prepared from cast iron by oxidising impurities in a reverberatory furnace lined with haematite. This haematite oxidises carbon to carbon monoxide.

Common method of extraction Roasting of sulphide partially and reduction.

Common method of extraction Roasting followed by reduction with coke.

The metal may be purified by fractional distillation.

Common method of extraction Roasting followed by Refining is done by Mond’s Process.

Water gas is used as a reducing agent for nickel oxide.