All of us use water in our homes and make it dirty.

Dirty! Are you surprised? Rich in lather, mixed with oil, black– brown water that goes down the drains from sinks, showers, toilets, laundries is dirty. It is called wastewater. This used water should not be wasted. We must clean it up by removing pollutants. Have you ever thought where the wastewater goes and what happens to it?

Clean water is a basic need of human being. Let us make a mindmap of the many uses of clean water.

(We have given one example of the use of clean water. You can add many more.) 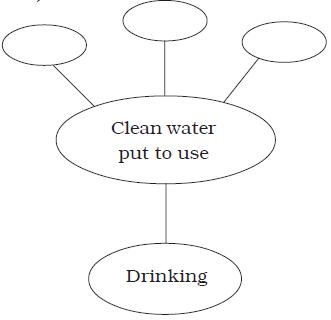 Clean water that is fit for use is unfortunately not available to all. It has been reported that more than one billion of our fellow human beings have no access to safe drinking water. This accounts for a large number of water-related diseases and even deaths. Women and girls walk for several kilometres to collect clean water, as you read in Chapter 16. Is it not a serious matter for human dignity?

You have studied in Chapter 16 about the increasing scarcity of freshwater due to population growth, pollution, industrial development, mismanagement and other factors. Realising the urgency of the situation on the World Water Day, on 22 March 2005, the General Assembly of the United Nations proclaimed the period 2005–2015 as the International Decade for action on “Water for life”. All efforts made during this decade aim to reduce by half the number of people who do not have access to safe drinking water.

Cleaning of water is a process of removing pollutants before it enters a water body or is reused. This process of wastewater treatment is commonly known as “Sewage Treatment”. It takes place in several stages.

Sewage is wastewater released by homes, industries, hospitals, offices and other users. It also includes rainwater that has run down the street during a storm or heavy rain. The water that washes off roads and rooftops carries harmful substances with it. Sewage is a liquid waste. Most of it is water, which has dissolved and suspended impurities. These impurities are called contaminants.

Locate an open drain near your home, school or on the roadside and inspect water flowing through it.

Record colour, odour and any other observation. Discuss with your friends and your teacher and fill up the following Table 18.1.

We know that sewage is a complex mixture containing suspended solids, organic and inorganic impurities, nutrients, saprotrophic and disease causing bacteria and other microbes.

18.3 WATER FRESHENS UP — AN
EVENTFUL JOURNEY

In a home or a public building generally one set of pipes brings clean water and another set of pipes takes away wastewater. Imagine that we could see through the ground. We would see a network of big and small pipes, called sewers, forming the sewerage. It is like a transport system that carries sewage from the point of being produced to the point of disposal, i.e. treatment plant. Manholes are located at every 50 m to 60 m in the sewerage, at the junction

of two or more sewers and at points where there is a change in direction.

Study the sewage route in your home/ school/building. Do the following:

In case you do not have a sewerage system in your locality, find out how sewage is being disposed off.

Perform the following activity. It will help you understand the processes that take place at the wastewater treatment plant.

Divide yourself into groups to perform the activity. Record observations at each stage: 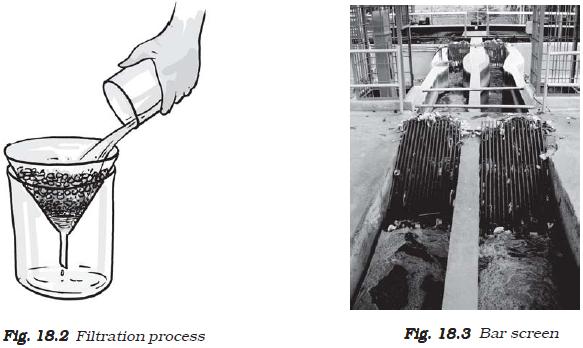 (a) What changes did you observe in the appearance of the liquid after aeration?

(b) Did aeration change the odour?

(c) What was removed by the sand filter?

(d) Did chlorine remove the colour?

(e) Did chlorine have an odour? Was it worse than that of the wastewater?

2. Water then goes to a grit and sand removal tank. The speed of the incoming wastewater is decreased to allow sand, grit and pebbles to settle down (Fig. 18.4). 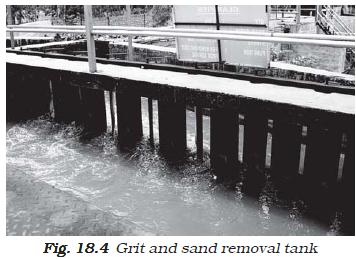 3. The water is then allowed to settle in a large tank which is sloped towards the middle. Solids like faeces settle at the bottom and are removed with a scraper. This is the sludge. A skimmer removes the floatable solids like oil and grease. Water so cleared is called clarified water (Fig. 18.5). 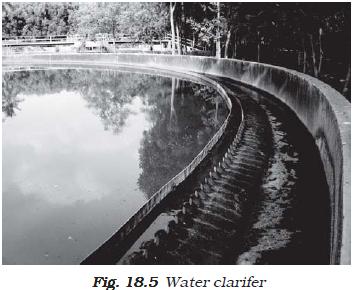 The sludge is transferred to a separate tank where it is decomposed by the anaerobic bacteria. The biogas produced in the process can be used as fuel or can be used to produce electricity.

4. Air is pumped into the clarified water to help aerobic bacteria to grow. Bacteria consume human waste, food waste, soaps and other unwanted matter still remaining in clarified water (Fig. 18.6). After several hours, the suspended microbes settle at the bottom of the tank as activated sludge. The water is then removed from the top. 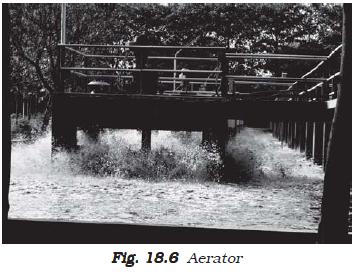 The activated sludge is about 97% water. The water is removed by sand drying beds or machines. Dried sludge is used as manure, returning organic matter and nutrients to the soil. The treated water has a very low level of organic material and suspended matter. It is discharged into a sea, a river or into the ground. Nature cleans it up further. Sometimes it may be necessary to disinfect water with chemicals like chlorine and ozone before releasing it into the distribution system.

Waste generation is a natural part of human activity. But we can limit the type of waste and quantity of waste produced. Often we have been repelled by offensive smell. The sight of open drains is disgusting. The situation 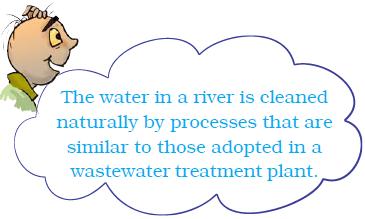 It has been suggested that we should plant eucalyptus trees all along sewage ponds. These trees absorb all surplus wastewater rapidly and release pure water vapour into the atmosphere.

worsens in the rainy season when the drains start overflowing. We have to wade through the mud pools on the roads. Most unhygienic and unsanitary conditions prevail. Flies, mosquitoes and other insects breed in it.

You can be an enlightened citizen and approach the municipality or the gram panchayat. Insist that the open drains be covered. If the sewage of any particular house makes the neighbourhood dirty, you should

request them to be more considerate about others’ health.

One of the ways to minimise or eliminate waste and pollutants at their source is to see what you are releasing down the drain. 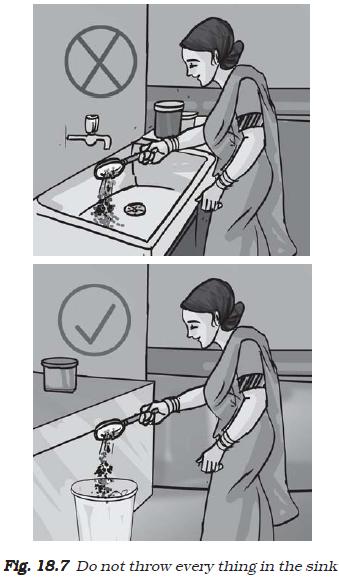 drains. They do not allow free flow of oxygen. This hampers the degradation process.

Poor sanitation and contaminated drinking water is the cause of a large number of diseases.

Let us look at our own country. A vast number of our people are still

A design of a toilet in which humans excreta is treated by earthworms has been tested in India. It has been found to be a novel, low water-use toilet for safe processing of human waste. The operation of the toilet is very simple and hygienic. The human excreta is completely converted to vermi cakes — a resource much needed for soil.

without sewerage facilities. Where do they relieve themselves? A very large fraction of our people defecates in the open, on dry riverbeds, on railway tracks, near fields and many a time directly in water. Untreated human excreta is a health hazard. It may cause water pollution and soil pollution. Both the surface water and groundwater get polluted. Groundwater is a source of water for wells, tubewells, springs and many rivers as you learnt in Chapter 16. Thus, it becomes the most common route for water borne diseases. They include cholera, typhoid, polio, meningitis, hepatitis and dysentery.

To improve sanitation, low cost onsite sewage disposal systems are being encouraged. Examples are septic tanks, chemical toilets, composting pits. Septic tanks are suitable for places where there is no sewerage system, for hospitals,

isolated buildings or a cluster of 4 to 5 houses. Some organisations offer hygienic on-site human waste disposal technology. These toilets do not require scavenging. Excreta from the toilet seats flow through covered drains into a biogas plant. The biogas produced is used as a source of energy.

In our country fairs are organised periodically. A large number of people participate in them. In the same way railway stations, bus depots, airports, hospitals are very busy places. Thousands of people visit them daily. Large amount of waste is generated here. It must be disposed of properly otherwise epidemics could break out. The government has laid down certain standards of sanitation but, unfortunately, they are not strictly enforced.

However, all of us can contribute in maintaining sanitation at public places. We should not scatter litter anywhere. If there is no dustbin in sight, we should carry the litter home and throw it in the dustbin.

We all have a role to play in keeping our environment clean and healthy. You must realise your responsibility in maintaining the water sources in a healthy state. Adopting good sanitation practices should be our way of life. As an agent of change your individual initiative will make a great difference.

Influence others with your energy, ideas and optimism. A lot can be done if people work together. There is great power in collective action

“No one need to wait for anyone else to adopt a humane and enlightened course of action.”

2. What is sewage? Explain why it is harmful to discharge untreated sewage into rivers or seas.

3. Why should oils and fats be not released in the drain? Explain.

4. Describe the steps involved in getting clarified water from wastewater.

5. What is sludge? Explain how it is treated.

8. Explain the function of bar screens in a wastewater treatment plant.

9. Explain the relationship between sanitation and disease.

10. Outline your role as an active citizen in relation to sanitation. 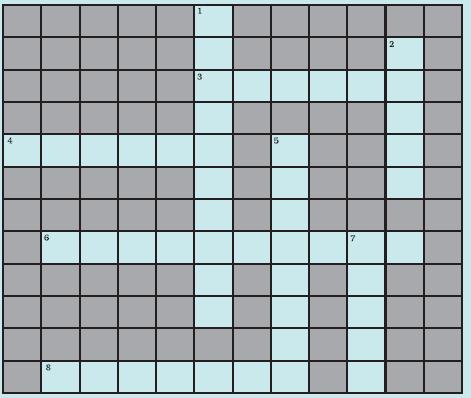 6. A word related to hygiene

7. A chemical to disinfect water

12. Study the following statements about ozone:

(a) It is essential for breathing of living organisms.

(b) It is used to disinfect water.

Which of these statements are correct?

1. Construct a crossword puzzle of your own using the keywords.

2. Then and now: Talk to your grand parents and other elderly people in the neighbourhood. Find out the sewage disposal systems available to them. You can also write letters to people living in far off places to get more information. Prepare a brief report on the information you collected.

It could be as exciting and enriching as a visit to a zoo, a museum, or a park. To guide your observation here are a few suggestions. Record in your notepad:

(a) The location of the sewage plant.

(c) The purpose of screening as the initial process.

(d) How is air bubbled through the aeration tank?

(e) How safe is the water at the end of the treatment? How is it tested?

(f ) Where is the water discharged after treatment?

(g) What happens to the plant during heavy rains?

(h) Is biogas consumed within the plant or sold to other consumers?

(i) What happens to the treated sludge?

( j ) Is there any special effort to protect nearby houses from the plant?

Through the ages Development of Sanitation:

“By providing clean water and sanitation to the poorest people on the planet, we can reduce poverty and suffering and ensure education for all children.”—UNICEF

One of the ancient civilisations, Harappa and Mohenjodaro had perhaps the world’s first urban sanitation system. Within the city individual houses, or groups of houses, obtained water from wells. There was a separate room for bathing, and wastewater was directed to the covered drains which lined the major streets. The oldest toilet made of bricks is about 4500 years old.