A colloid is a heterogeneous system in which one substance is dispersed (disperse phase) as very fine particles in another substance called dispersion medium. The study of the colloidal state of matter was started by Thomas Graham (1861).

Depending on the nature of dispersion medium. the colloids can be named as hydrosols or aquasols (for water), alcohols (for alcohols), benzosols (for benzene) and aerosols (for gases), 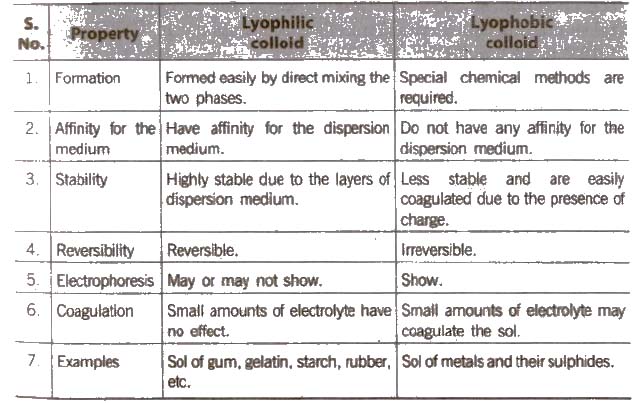 Kraft temperature (Tk) It is the minimum temperature of the colloidal system above which the formation of micelles takes place.

These methods involve the joining of a large number of small particles to form particles of colloidal size. Some methods are 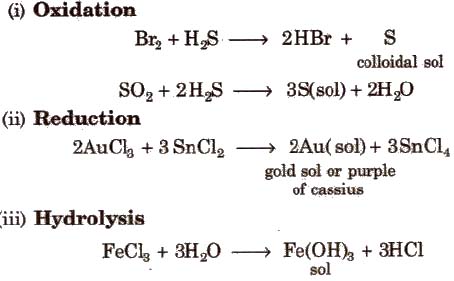 In this method, bigger particles are broken down to colloidal size. Some methods are

(i) Mechanical disintegration In this method, suspension is ground well in a colloid mill consisting of two steel discs which rotate in opposite directions at very high speed, to obtain the particles of colloidal size.

(ii) Electrical disintegration/Bredig’s Arc method In this method, electric arc is struck between electrodes of the metal (gold, silver, platinum, etc) immersed in the dispersion medium. The intense heat produced vapourises the metal which then condense to form particles of colloidal size.

(iii) Peptization This method is used to convert fresh precipitate into colloidal state by shaking with dispersion medium in the presence of small amount of electrolyte. The electrolyte used for this purpose is called peptizing agent.

The process used for reducing the amount of impurities to a requisite minimum of a colloid, is known as purification of colloidal solutions.

(i) Dialysis It is based upon the principle that impurities of true solutions can pass through the parchment paper or cellophane membrane while colloidal particles cannot.

In this process, dissolved substances are removed from the colloidal solution by means of diffusion through a suitable membrane.

(iii) Ultrafiltration Ultrafiltration is the process of separation of colloidal particles from the solvent and soluble solutes present in the colloidal solution by specially prepared filters, called ultrafilters.

(iii) Visibility The particles of colloidal solution are not visible to naked eye or under ordinary microscope.

Tyndall effect is observed only when the following two conditions are satisfied:

(i) The diameter of the dispersed particles is not much smaller than the wavelength of the light used.

(ii) The refractive indices of the dispersed phase and the dispersion medium differ greatly in magnitude.

Tyndall effect is also observed when sunlight enters in a dark room through a slit or when light is thrown from a light projector in a cinema hall. Tale of comets is seen as a Tyndall cone due to scattering of light by the tiny solid particles. left by the comet in its path.

It can be brought about by :

Hardy-Schulz rule Greater the valency of the oppositely charged ions of the electrolyte, more will be its coagulating power, i.e. coagulating power ∝ charge of ion, e.g., for As2 O3 sol the order is

In the presence of a lyophilic colloids, lyophobic sol gets protected towards the action of electrolyte This phenomenon is called protection and the lyophilic colloid is termed as protective colloid.

[Smaller the gold number of a protective colloid, greater is its protective power.]

It is a colloidal dispersion in which both dispersed phase and dispersion medium are liquid.

Dye test and dilution test must be used to distinguish between the two types of emulsions.

Emulsifying agents or emulsifiers are the substances added in small quantity to stabilize the emulsions of fairly high concentration.

Demulsification The separation of an emulsion into its constituent liquids is called demulsification. It can be carried out by freezing boiling. centrifugation, etc

Gel is a liquid-solid colloidal system in which a liquid is dispersed in a solid.

When gels are allowed to stand. they give out small quantity of trapped liquid and the gel shrinks in volume. This phenomenon is called syneresis or weeping of gel.