It was discovered by Henry Cavendish in 1766 by the action of dilute H2O4 on iron. It was named ‘inflammable air’, Lavoisier gave it the name hydrogen (Creek: Hydra = water, gennas = producer]. It occurs in free state as well as in combined state.

Position of Hydrogen in the Periodic Table

Hydrogen resembles with alkali metals (group I) as well as halogens (group 17), At the same time, it differs from both in certain characteristics. That is why hydrogen if; called “rogue element”.

However. it has been placed in group 1 on the basis of its configuration 1s1, which is the basis of modern classification of elements.

Hydrogen exists in the form of three sotopes :

Metals which have reduction potential lesser than H, can liberate H2 from acids.

(ii) It can also be prepared by the reaction of zinc with aqueous alkali.

b) Commercial production of dihydrogen

(i) By the electrolysis of acidified water

Carbon dioxide is removed by dissolving it in water under pressure (20-25 atm) and hydrogen left behind is collected.

(iii) From steam (Lane’s process) Super heated steam is passed over iron filings heated to about 1023-1073 K when hydrogen is
formed.

(v) From hydrocarbons by partial oxidation

vi) It is also obtained as a by-product in the manufacture of NaOH and chlorine hy the electrolysis of brine solution.

During electrolysis, the reactions that take place are

Dihydrogen is a colourless, odourless, tasteless, combustible gas. It is lighter than air and insoluble in water. It is neutral to litmus.

(i) Reactivity The relative inertness of dihydrogen at room temperature is because of Its high enthalpy of H-H bond i.e.. high bond dissociation energy. So its reactions take place under specific conditions only (at high temperature).

(By heating H2 with coal and heavy oils under very high pressure in the presence of catalyst.)

It is very reactive and its half-life period is 0.33 s.

Activity of nascent H depends upon the reaction by which it is obtained.

Adsorption of hydrogen at the metal surface is called occlusion. This hydrogen brings out many chemical changes such as reduction and hydrogenation. Occlusion decreases with rise in temperature.

Hydrogen economy is the use of liquid hydrogen as an alternate source of energy. The technology involves the production, transportation and storage of energy in the form of liquid hydrogen. Large scale production of hydrogen can be done by electrolysis of water or by thermochemical reaction cycle. Storage of hydrogen in liquid form can be done in vacuum insulated cryogenic tanks or in a metal or in all alloy like iron-titanium alloy as interstitial hydride. Hydrogen fuel has many advantage over conventional fuels in that it is non-polluting and it liberates large amount of energy on combustion.

Pbotohydrogen is used to obtain renewable energy from sunlight by using microscopic organism such as bacteria or algae.

The compounds of hydrogen with metals and non-metals are called hydrides.

These are formed by elements of group I, II, (except Be and Mg) by heating them in hydrogen.

These are white colourless solids (crystalline) having high m.p. and b.p. easily decomposed by water, CO2 or SO2.

They are strong reducing agents. Alkali metal hydrides are used for making LiAlH4, NaBH4, etc and for removing last traces of water from organic compounds.

These are formed by elements of p-block having higher electronegativity than hydrogen.

The transition metals and rare earth metals combine with hydrogen to from interstitial hydrides. They exhibit metallic properties and are powerful reducing agents. They are non-stoicluometric hydrides and their composition varies with temperature and pressure for e.g., LaH2.76, TiH1.73.

Metals of group 7, 8 and 9 do not form hydrides and this region of the Periodic Table is called hydride gap.

Polymeric hydrides are formed by’ elements having electronegativity in the range 1.4 to 2.0, e.g., (BeH2)n, (AlH3)n, etc. In complex hydrides H– acts as ligand and is attached to central metal atom, e.g., LiAlH4, LiBH4, etc.

Water is the most abundant and widely distributed on the earth. It occurs in all the three physical states. H2O is a covalent molecule in which oxygen is sp3 hybridised. It has bent structure.

1. Water is amphoteric in nature.

2. In redox reactions,water reacts with metals and non- metals both.

4. A number of compounds such as calcium hydride, calcium phosphide. etc ., undergo hydrolysis with water.

Suspended particles are removed by coagulation with alum followed by filtration.

Exposure to sunlight, boiling, chlorination (treatment with liquid Cl2 or bleaching powder), ozonisation and addition of CuSO5 are some processes which are employed to destroy bacteria.

It was discovered by Urey in 1932. It can be prepared by exhaustive electrolysis of ordinary water using nickel electrodes. It is colourless, odourless, tasteless liquid. 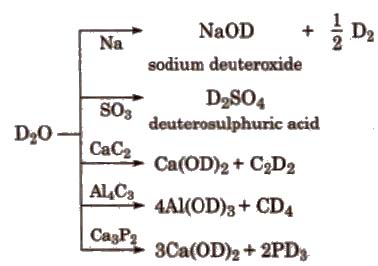 It can be achieved:

(a) By boiling The soluble bicarbonates are converted into insoluble carbonates.

(b) By Clark’s process By adding lime water or milk of lime.

(i) By adding washing soda The calcium or magnesium salts are precipitated as carbonates.

(iii) By adding sodium phosphate (Na3PO4) The phosphates of calcium and magnesium are precipitated.

Similarly, magnesium also precipitate out in the form of magnesium phosphate, Mg3(PO4)2.

Permutit when fully exhausted can be regenerated by treating with 10% solution of sodium chloride. It is most efficient method to gel water with zero degree of hardness.

These are of two types:

(a) Cation exchange resins are big molecules containing sulphonic acid group (-SO3H). It is first changed into sodium salt with the general formula RNa. The hard water is passed through it so Ca2+ and M2+ are exchanged and removed.

The resins like permutit can be regenerated with a solution of NaCl.

(b) Anion exchange resins are also big molecules and can exchange anions. They contain an amino group.

The water is first passed through cation resins and then through anion tesin and pure distilled water is obtained.

Measurement of Degree of Hardness

Degree of hardness is defined as the number of parts of calcium carbonate or equivalent to various calcium and magnesium salts present in one million parts of water by mass. It is expressed in ppm.

H2O2 was discovered by J.L. Thenard in 1818. It is an important compound used in pollution control treatment of domestic and industrial effluents.

where, X is volume strength of H2O2.

It is stored in the presence of traces of alcohol, acetanilide or sodium pyrophosphate which slow down the rate of decomposition of hydrogen peroxide.

e.g., oxidising action of HzOz is

(a) In acidic medium

(b) In basic medium

(iv) Bleaching properties Its bleaching action is due to oxidation by atomic oxygen and permanent.