The d-block of the Periodic Table contains the elements of the groups 3-12 in which the d·orbitals are progressively filled. There are mainly three series of the elements, 3d-series (Sc to Zn) 4d-series (Y to Cd) and 5d-series (La to Hg omitting Ce to Lu). The fourth 6d-series which begins with Ac is still incomplete.

Elements having partially filled d-orbitals in ground state or in excited state, are known as transition elements. They have been placed in the centre of the Periodic Table between s-block and p-block elements.

Iron is the most abundant and widely used transition metal. 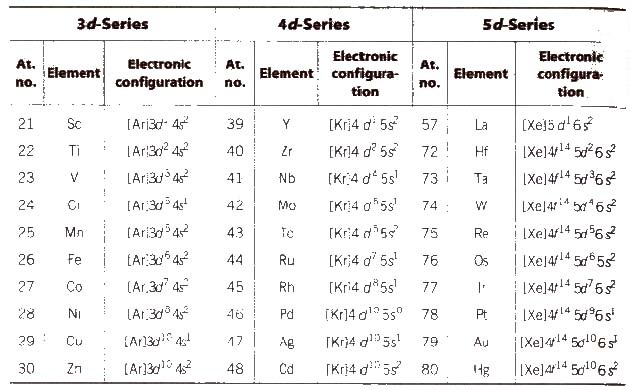 (i) Atomic and ionic size Ions of the same charge in a given series exhibit regular decrease in radius with increasing atomic number, because the new electron enters in a d – orbital and nuclear charge increases by unity.

In last of the series, a small increase in size is observed due to electron-electron repulsion.

(Atomic and ionic radii increase from 3d-series to 4d-series but the radii of the third (Sd) series elements are virtually the same as those of the corresponding member of the second series. It can be explained on the basis of lanthanoid contraction [poor shielding of 4f ].

Due to lanthanide contraction Zr and Hf Have almost similar radii.

(ii) Ionisation enthalpies In a series as we move from left to right, ionization enthalpy increases due to increase in nuclear charge but not in regular trend.

The irregular trend in the first ionisation enthalpy of the 3d metals, though of little chemical significance, can be accounted by considering that the removal of one electron alters the relative energies of 4s and 3d-orbitals.

(iv) Enthalpy of atomisation Transition elements exhibit higher enthalpies of atomization. Because of the presence of a large number of unpaired electrons in their atoms, they have stronger interatomic interactions and hence, stronger bond.

EoM2+ / M is governed by three factors. Enthalpy of sublimation, enthalpy of ionisation and enthalpy of hydration.

The irregular trend in 3d series is due to irregular variation in ionisation enthalpy and heat of sublimation.

[If sum of the first and second ionisation enthalpies is greater than hydration enthalpy standard potential (EoM2+ / M) will be positive and reactivity will be lower and vice-versa.]

(vi) Melting and boiling point Due to strong metallic bond, they have high m.p. and b.p. The m.p. of these elements becomes maximum and then decreases with the increase in atomic number.

Manganese and technetium show abnormal values in the trend. Tungsten has the highest m.p. (3410oC).

Mercury is liquid at room temperature (m.p. – 38.9°C) due to absence of unpaired electrons, and weak metallic bonding.

(xiii) Coloured ions Colour exhibited by transition metal ions is due to the presence of unpaired electrons in d-orbitals and is due to the d-d transitions of electrons, when invisible light is incident on the ion.

Colour of a complex depends on the metal, its oxidation state and its ligands, e.g., [Cu(H2O)4]2+ is pale blue while [Cu(NH3)4]2+ is dark blue. CuSO4· 5H2O is blue in colour and anhydrous CuSO4 is colourless.

Charge transfer also give intense colour e.g., MnO–4 ion does not contain any unpaired d-electron. Its purple colour is due to charge transfer from O to MD, thus O-2 change to O– and Mn(VII) to Mn(Vl). Charge transfer is possible only when the energy levels on the two different atoms involved are fairly close.

(b) Diamagnetic substances are repelled by applied magnetic field and have no unpaired electron.

Magnetic moment is given by

(a) the presence of partly filled d-orbitals resulting in variable oxidation states.

(b) formation of intermediate complex with reactants by lowering the energy of activation.

Some important catalysts having transition metals are

(xiv) Formation of alloys d-block elements have a strong tendency to form alloys, because their atomic :;ires are Vel’)’ similar and in the crystal lattice one metal can be readily replaced by another. Alloys so formed have high m.p.. The metals Mo, W, Cr, Ni, and V are used for the production of stainless steel.

Amalgam is an alloy formed by mercury with other metals, Iron and platinum do not form any alloy with mercury. 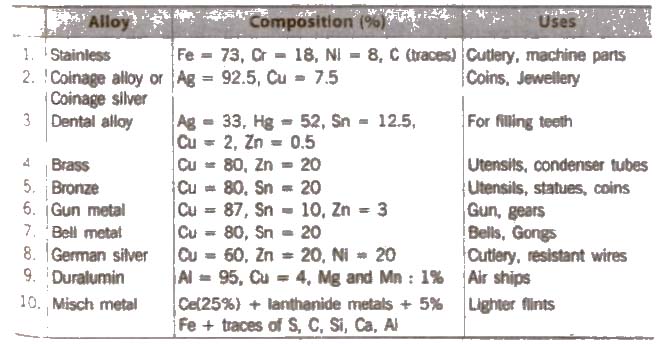 Some important reagents having transition metals

2. TiCI2 and TiO2 are used in smoke screens. TiO2 is also used as white pigment of paints.

3. Tantalum is used in surgical venables and analytical weights.

4. Chromium is used in stainless steel and chrome plating.

5. Mo is used in X-rays tubes. Pt is used in resistance thermometers.

6. Cd is used for making joints in jewellery.

7. Ce is used as a scavenger of oxygen and sulphur in many metals-

8. Alkaline solution of K2HgI4 is called Nessler’s reagent and is used to test the presence of ammonium ion (NH+4).

Chromates and dichromates are interconvertible in aqueous solution depending upon pH of the solutions.

1. K2Cr27 is used as oxidising agent in volumetric analysis.

2. It is used in mordant dyes, leather industry, photography (for hardening of film).

3. It is used in chromyl chloride test.

4. It is used in cleaning glassware.

1. In the presence of dilute H2SO4, KMnO4 is reduced to manganous salt.

Acidic KMnO4 solution oxidises oxalates to CO2, iron(II) to iron (lll), nitrites to nitrates and iodides to iodine. The half-reactions of reductants are

To acidify KMnO4, only H2SO4 is used and not HCI or HNO3 because HCI reacts with KMnO4 and produce Cl2 while HNO3, itself acts as oxidising agent.

2. In alkaline medium, KMnO4 is reduced to insoluble MnO2.

(i) in laboratory preparation of CI2.

(ii) as an oxidising agent and disinfectant.

It is also known as blue vitriol.

Method of preparation It is obtained by the action of dil H2SO4 on copper scrap in the presence of air.

1. On heating it turns white due to loss of water of crystallisation.

2. It gives blue solution with NH4OH and white ppt of Cu2I2 with KI.

It is also called Lunar caustic.

1. It is colourless, crystalline compound which blackens when comes in contact of organic substances (skin, cloth, etc.)

2. With potassium dichromate, it gives red ppt of Ag2CrO4.

3. On strong heating, it decomposes to metallic silver.

4. Ammoniacal solution of silver nitrate is known as Tollen’s reagent.

Uses It is used as laboratory reagent, in silvering of mirror, in the preparation of inks and hair dyes, etc.

The elements in which the filling of atomic orbitals by electrons take place in {-subshells, two levels inside the outer subshell, are known as inner-transition elements. They are also known as f-block elements

They have been classified into two series.

(a) 4f-series (first inner-transition series) The last electron enters in 4f-orbital. The elements belonging to this series are also known as lanthanoids.

(b) 5f-series (second inner-transition series) The last electron enters in 5f-orbital. The elements belonging to this series are also known as actinides.

The fifteen elements from lanthanum (at. no. 57) to lutetium (at. no. 71) are known as lanthanides or rare earths. Their properties are as follows :

The most common and most stable oxidation state of lanthanides is +3 but some elements also exhibit +2 and +4 oxidation states in which they leave behind stable ions, e.g.,

Magnetic properties have spin and orbit contributions. Hence, magnetic moments are given by the formula

All lanthanide ions with the exception of La3+, Lu3+ and Ce4+, are paramagnetic in nature.

Steady decrease in the atomic and ionic (Ln3+) radii as the atomic Dumber of the lanthanide elements increases is called lanthanide contraction. This is because the additional electron goes to 4f-subshell and 4f-orbitals being large and diffuse, have poor shielding effect. The effective nuclear charge increases which causes the contraction in the size of electron charge cloud. This contraction in size is quite regular and is known as lanthanoid contraction.

The f- f transitions are possible due to absorption of light from the visible region.

(i) Covalent character of cations increase.
(ii) The electronegativity of trivalent ions increases slightly.
(iii) There is decrease in basic strength of oxides and hydroxides from La to Lu.
(iv) There is small increase in standard electrode potential values.
(v) Sizes of Zr and Hf; Nb and Ta are similar, so they are called chemical twins.

The species containing unpaired electrons are coloured and so on in the case of lanthanide ions.

Lanthanides have high melting and boiling points but there is no regular trend.

Lanthanides have densities varying . from 6.67 to 9.7 g cm-3, but there IS no regular trend for these values.

For lanthanides the electronegativity values are almost same as that of $-block elements. Lanthanides form ionic compounds.

The ionisation energy values of lanthanoids are not very high due to their large size and comparable with those of alkaline earth metals.

Due to their large ionic SIze, they have little tendency to form complexes.

Due to their low values of ionisation energies, the lanthanides are very reactive.

The fifteen elements from actinium (at. no. 89) to lawrencium (at. no. 103) are known as actinides and constitute the 5f series. From neptunium to onwards the elements are man-made (artificially prepared) and also known as transuranic elements.

The last electron in such elements enters in the 5f atomic orbital.

Their general electronic configuration is

There is not much difference between the energies of 5f and 6d, so it is difficult to predict whether the electron has entered in 5f or 6d.

The magnetic moments of actinide ions are smaller than theoretical values. It is hard to interpret due to large spin orbit coupling.

They have high values for melting and boiling points but there is no regular trend.

The value of density vary from 7.0 gcm-3 to 20 gcm-3. Again there is no regular trend in density.

They are strong reducing agents as they have high E° values approximately 2.0 V.

Actinide are very reactive in nature and combine with oxygen and halogens like lanthanoids.

Actinide ions are coloured due to the presence of unpaired electrons and f-f transitions.

They have higher tendency to form complex compounds.