On the basis of the nature of the carbon to which halogen atom is attached, halogen derivatives are classified as 1°, 2°, 3°, allylic, benzylic, vinylic and aryl derivatives, e.g.,

General Methods of Preparation of Haloalkanes

In Groove’s method, ZnC12 is used to weaken the C-OH bond. In case of 3° alcohols, ZnC12 is not required.

The reactivity order of halogen acids is HI > HBr > HCl.

Darzen procedure is the best method for preparing alkyl halides from alcohols since both the by products (SO2 and HCl) are gaseous and escape easily.

Addition of Hydrogen Halides on Alkenes

Hg2F2, COF2 and SbF3 can also be used as a reagent for Swarts reaction.

2. Bond strength of haloalkanes decreases as the size of the halogen atom increases. Thus, the order of bond strength is

3. Dipole moment decreases as the electronegativity of the halogen decreases.

4. Haloalkanes though polar but are insoluble in water as they do not form hydrogen bonding with water. 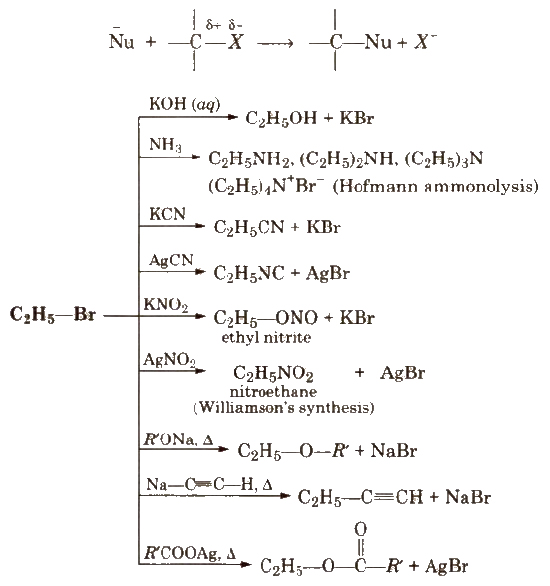 Like KCN, KNO2 form R-ONO while AgNO2 produces R-NO2 as product. Vinyl chloride is less reactive towards nucleophilic substitution reactions due to resonance.

In SN1 reactions, partial racemisation occurs due to the possibility of frontal as well as backside attack on planar carbocation.

(b) SN2 type (Bimolecular nucleophilic substitution) These reactions proceed in one step and is a second order reaction with r = k[RX] [Nu].

Reactivity of halides towards SN2 mechanism is

Rate of reaction in SN2 mechanism depends on the strength of the attacking nucleophile. Strength of some common nucleophiles is

Resonating structure of benzyl carbocations are

Relative reactivity of alkyl halides for same alkyl group is

Dehydrohalogenation is a β – elimination reaction in which halogen is from α-carbon atom and the hydrogen from the α-carbon according to Saytzeff rule, e.g.,

Ease of dehydrohalogenation among halides

Grignard reagent is never isolated in the solid state as it explodes in dry state. So it is used as ethereal solution.

1. By Halogenation of Aromatic Hydrocarbons

It is an electrophilic substitution reaction.

2. By Side Chain Halogenation

This is because of more symmetrical nature of p-isomer.

4. Due to resonance in chlorobenzene, C-CI bond is shorter and hence, its dipole moment is less than that ofcyclohexylchloride.

Aryl halides are less reactive towards nucleophilic substitution reaction. Their low reactivity is attributed due to the following reasons:

Presence of electron withdrawing group (-NO2) increases the reactivity. 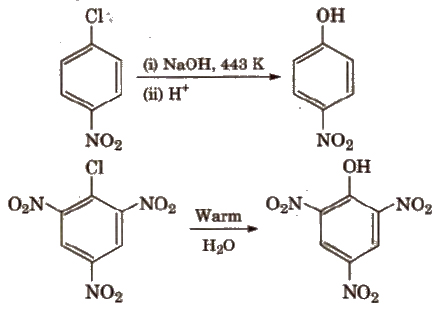 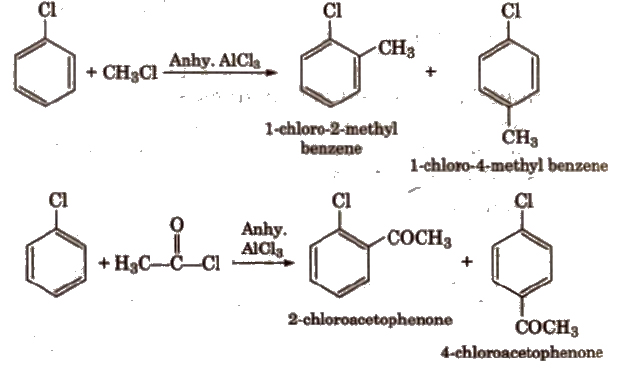 Dichloromethane (CH2Cl2) is widely used as a solvent, as a propellant in aerosols. Direct contact of dichloromethane in humans causes intense burning and milk redness of the skin.

To avoid this oxidation CHCl3 iI .toreci in dark brown bottles and filled to the brim. 1% ethanol is added to chloroform which converts harmful phosgene gas into diethyl carbonate.

2. CHCl3 is widely used in the production of freon refrigerant R-22.

Iodoform is prepared by iodoform reaction.

Compounds containing either CH3CO- or CH3CH(OH) group form yellow colour iodoform with I2 and NaOH.

Iodoform when comes in contact with organic matter, decomposes easily to free iodine, an antiseptic. Due to its objectionable smell, it has been replaced by other formulations containing iodine.

CCI4 is a colourless, non-inflammable, poisonous liquid, soluble in alcohol and ether.

The chlorofluorocarbon compounds of methane and ethane are collectively known as freons. These are usually produced for aerosol propellants, refrigeration and air conditioning purposes. Carbon tetra chloride when reacts with antimony trifluoride in the presence of SbCl5 as catalyst, dichlorofluromethane (freon) is obtained. 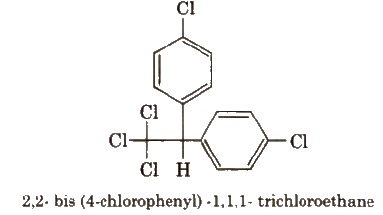 DDT is the first chlorinated organic insecticide. Its stability and fat solubility’is a great problem.

It is prepared from chloral and chlorobenzene in the presence of conc. H2SO4·

It is used as moth repellant and is also known as artificial camphor.