In aldehydes, the carbonyl group ( )C=O) is bonded to carbon and hydrogen, while in the ketones, it is bonded to two carbon atoms

The carbon and oxygen of the carbonyl group are Sp2 hybridised and the carbonyl double bond contains one o-bond and one π-bond.

The electronegativity of oxygen is much higher than that of the carbon, so there electron cloud is shifted towards the oxygen. Therefore, C-O bond is polar in nature.

(i) Nomenclature of aldehydes In IUPAC system, the suffix “e” of alkane is replaced by the suffIX “al”. e.g.,

(ii) Nomenclature of ketones In IUPAC system, the suffix “e” of alkane is replaced by “one”. e.g.,

Preparation of Aldehydes and Ketones

(i) By oxidation of alcohols Aldehydes and ketones are generally prepared by oxidation of primary and secondary alcohols, respectively.

(ii) By dehydrogenation of alcohols In this method, alcohol vapours are passed over heavy metal catalysts (Ag or Cu). Primary and secondary alcohols give aldehydes and ketones.

(iii) By ozonolysis of alkenes 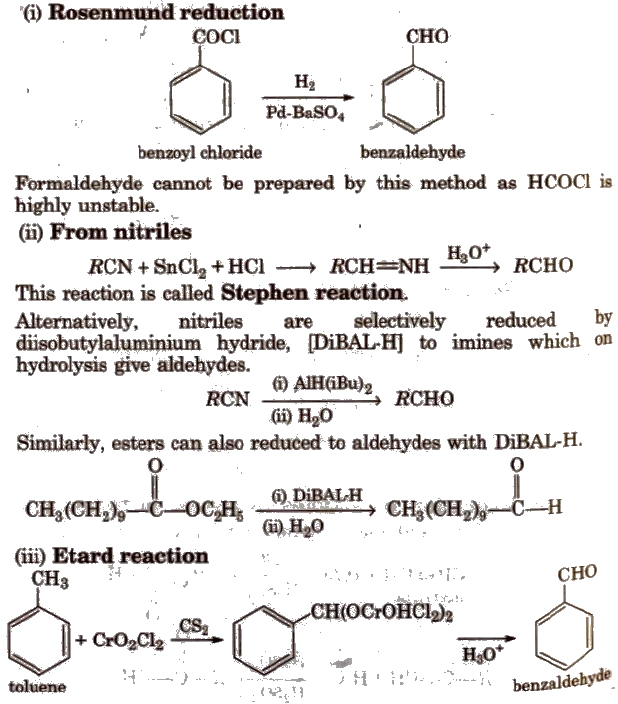 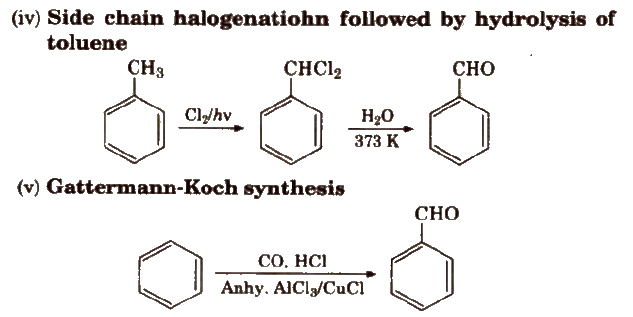 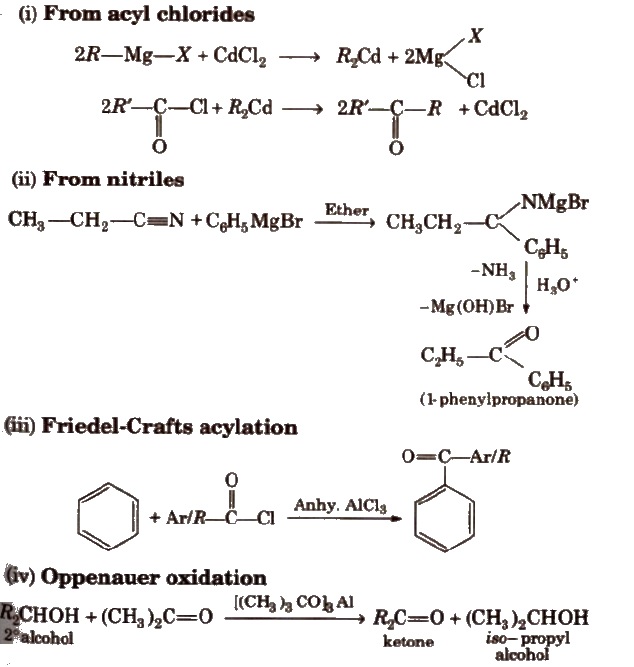 Physical Properties of Aldehydes and Ketones

1. Methanal (HCHO) is a gas at room temperature. and its 40% aqueous solution is known as formalin. It is a reducing agent in silvering of mirrors and decolourising vat dyes.
2. Ethanal (CH3CHO) is a volatile liquid. Other aldehydes and ketones are liquid or solid at room temperature.
3. The boiling point of aldehydes and ketones are higher than hydrocarbons and ethers of comparable molecular mass due to high magnitude of dipole-dipole interactions.
4. Aldehydes and ketones have lower boiling point than those of alcohols of similar molecular masses due to absence of intermolecular hydrogen bonding.
5. The lower members of aldehydes and ketones are miscible with water due to the formation of hydrogen bond with water. However, the solubility decreases with increase in length of alkyl chain.
6. Acetophenone is a hypnotic (sleep producing drug) so used as a medicine under the name hypnone.

Chemical Reactions of Aldehydes and Ketones 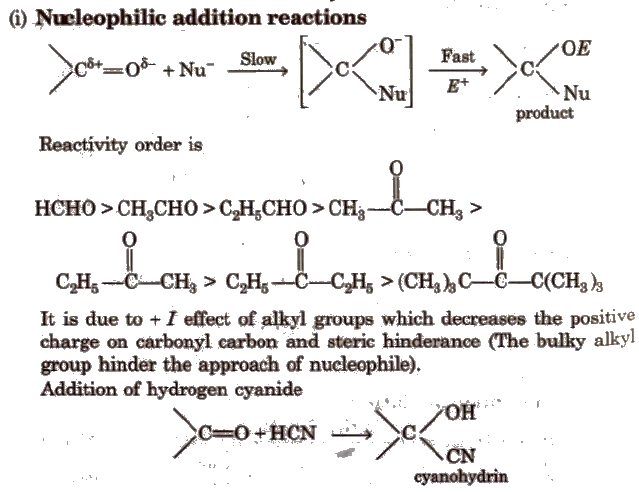 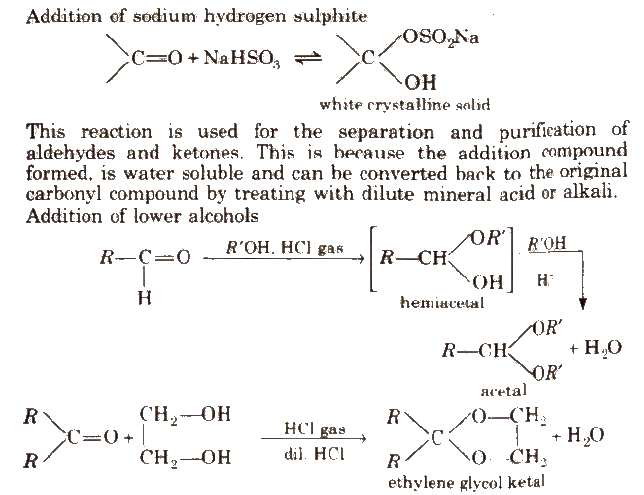 (ii) Addition of ammonia and its derivatives Reaction with ammonia 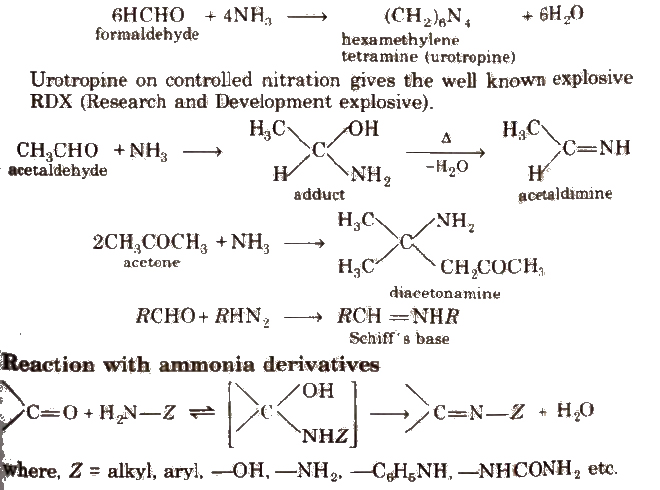 Some N-substituted Derivatives of Aldehydes and Ketones 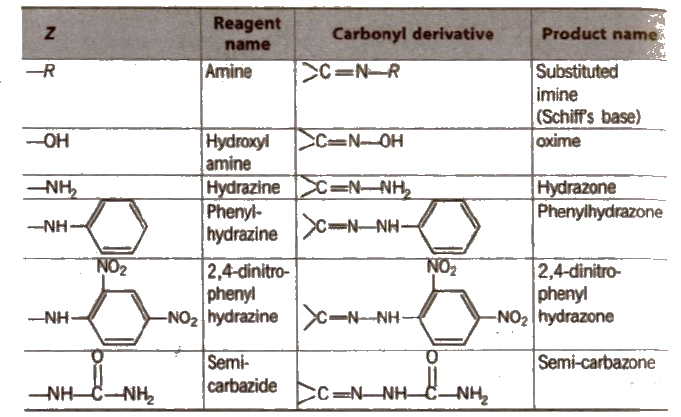 (iv) Oxidation Aldehydes get easily oxidised to carboxylic acids by HNO3, KMnO4, K2Cr2O7, etc., or even by mild oxidising agent.

During oxidation of unsymmetrical ketones the point of cleavage is such that keto group stays preferentially with the smaller alkyl group popoff’s rule).

(c) Benedict solution With it, aldehydes (except benzaldehyde) also give red ppt. of CU2O.

(d) Schiff’s reagent It is an aqueous solution of magenta or pink coloured rosaniline hydrochloride which has been decolourised by passing SO2, Aldehydes give pink colour with this reagent but ketones do not.

Haloform reaction Aldehydes and ketones having at east one methyl group [3-α hydrogen] linked to the carbonyl carbon atom (methyl ketones) are oxidised by sodium hypohalite to sodium salts of corresponding carboxylic acids having one carbon atom less than that of carbonyl compound. The methyl group is converted to haloform.

Iodoform reaction with sodium hypoiodite is also used for the detection of CH3 – group or CH3CH(OH)- group by producing yellow solid CHI3. 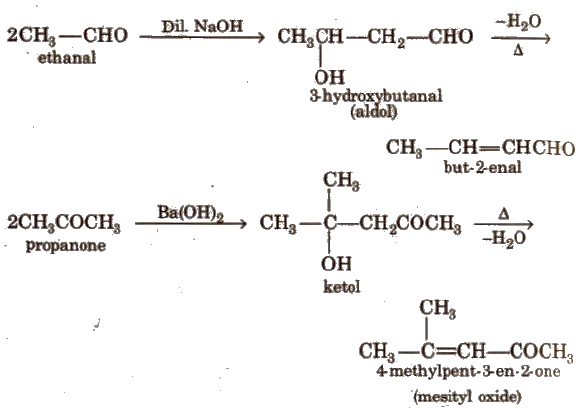 This reaction is exhibited by those aldehydes and ketones which have at least one a-hydrogen. 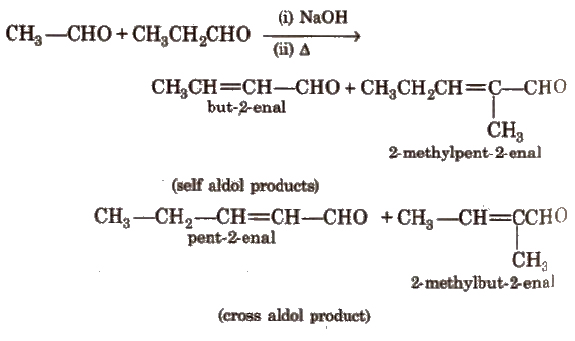 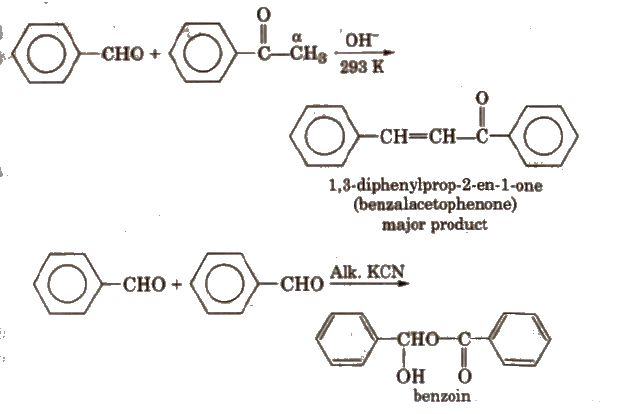 (vii) Cannizzaro reaction Aldehydes which do not have any α – hydrogen atom, undergo self oxidation and reduction (disproportionation) reaction on treatment with concentrated alkali.

(xi) Knoevenagel reaction It involves condensation between active methylene group and ,carbonyl groups in the presence of base. 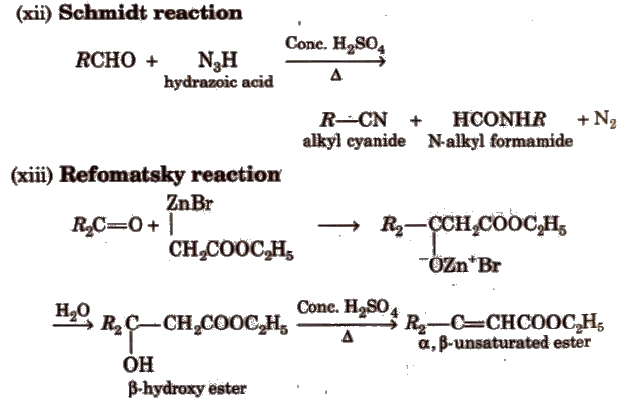 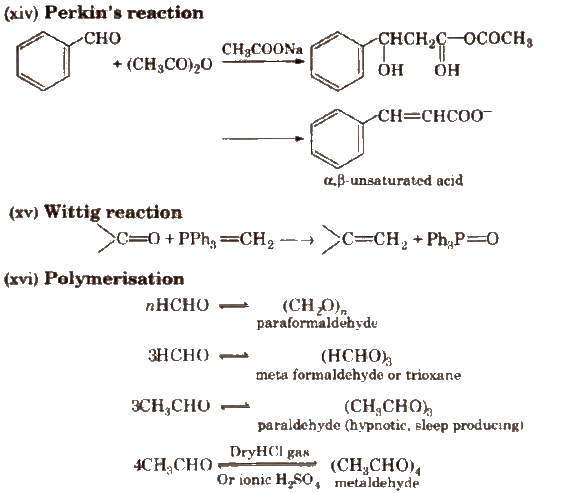 Depending upon the number of -COOH groups, they are classified as

Their IUPAC names have been derived from the corresponding alkanes by replacing the letter ‘li of the alkane with ‘oic’ and adding suffix ‘acid’ at the end, Thus, monocarboxylic acids are called alkanoic acids. 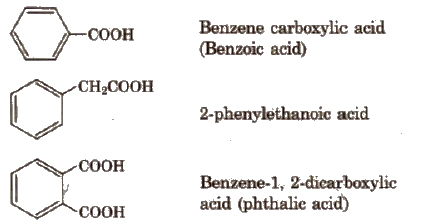 Methods of Preparation of Monocarboxylic Acids

(i) From primary alcohols and aldehydes

(iv) From nitriles and amides Nitriles are hydrolysed to amides and then to acids in the presence of H+ or OH– as catalyst. Mild reaction conditions are used to stop the reaction at the amide stage.

1. Aliphatic carboxylic acids up to nine carbon atoms are colourless liquids at room temperature with unpleasant odours. The higher acids are wax like solids.

2. The lower carboxylic acids are freely miscible with water due to the presence of intermolecular hydrogen bonding with H2O molecules. However, the solubility in water decreases gradually due to increase in the size of alkyl group.

3. Monocarboxylic acids have higher boiling points as compared to the alcohols of comparable molecular masses due to the presence of stronger intermolecular hydrogen bonding as shown below.

Carboxylic acids do not give reactions of carbonyl groups as it enters into resonance with lone pair of O of -OH group.

Above reactions are used to detect the presence of carboxyl group Ul an organic compound. ,

The strength of the acid is expressed in terms of the dissociation constant (Ka), also called acidity constant. A stronger acid has higher Ka but lesser pKavalue (pKa == -log Ka).

The electron releasing substituents (+1 effect) decrease the acidic strength of the carboxylic acids by destabilising the carboxylate ion.

The electron withdrawing substituents (-1 effect) such as halogen atoms (X), nitro (NO2) group increase the acidic strength by decreasing the magnitude of the negative charge on the carboxylate anion and thus stabilising it. The release of H+ ion becomes easy.

This is because – I effect decreases with distance.

Per acetic acid (CH3COOO-H) is a weaker acid than acetic acid as acetate ion is stabilised by resonance.

Some order of acidity are

(b) Similarly, Ka values of methyl substituted (toluic acids) at 298 K are as follows:

(a) Formation of anhydride 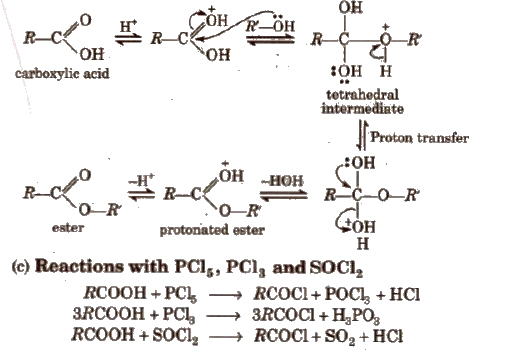 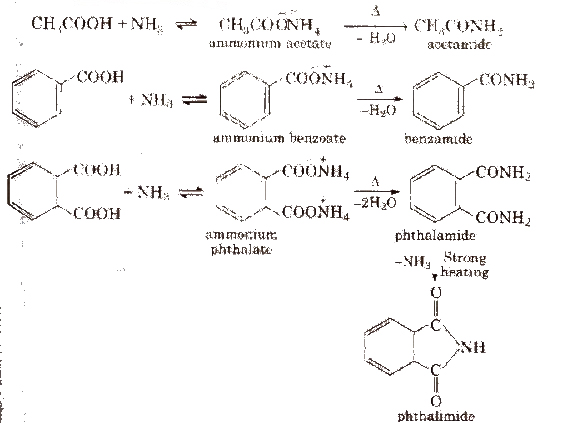 The reaction is known as Hell-Volhard-Zelinsky reaction.

(vi) Reducing property Among carboxylic acids, formic acid is the only acid that acts as reducing agent. It reduces, acidified KMnO4 to MnSO4, HgCl2 to Hg, Tollen’s reagent to silver mirror and Fehling’s solution to red ppt. and itself gets oxidised to CO2 and H2O.

(vii) Electrophilic substitution reactions of aromatic acids -COOH group shows -R effect, therefore, acts as a deactivating and meta-directing group. Carboxylic acids do not undergo Friedel-Craft’s reaction because the carboxylic group IS deactivating and the catalyst AlCl3 (anhy.) gets bonded to the carboxyl group. 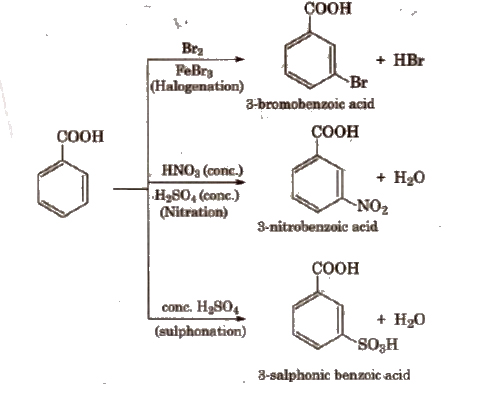 1. Formic acid is used in leather tanning, textile dyeing and finishing.
2. Acetic acid is used in the manufacture of rayon and in plastics, in in rubber and silk industries, in cooking and in vinegar (a 8-10% solution of acetic acid).
3. Benzoic acid and its salts are used as urinary antiseptics.
4. Formic acid can act as a reducing agent.

These are obtained when -OH group of carboxylic acids is replaced by Cl, NH2, OR’ and OCOR and are called respectively acid chloride, acid amide, ester and acid anhydride. 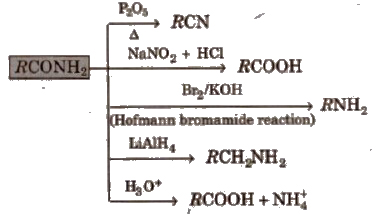