In the IUPAC system, the amines are regarded as alkanamines, e.g.,

The nitrogen atom in amine is spa-hybridised. The three hybrid orbitals are involved in bond formation and one hybrid atomic orbital contains the lone pair of electrons, giving the pyramidal geometry of amines. 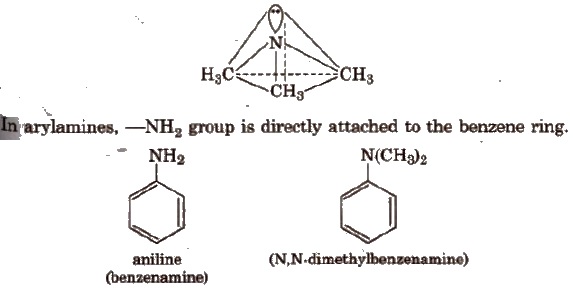 Methods of Preparation of Amines 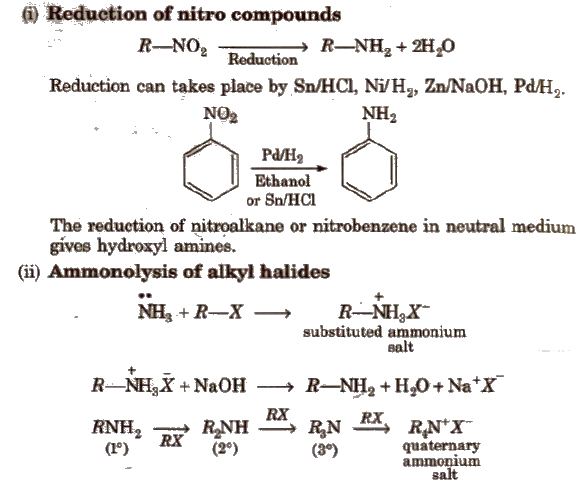 Ammonolysis has the disadvantage of yielding a mixture of primary, secondary and tertiary amines and also a quaternary ammonium salt.

However, primary amine is obtained as a major product by taking large excess of NH3.

Order of reactivity of halides ‘with amines is RI > RBr > RCI.

Aromatic amines could not be prepared since aryl halides are much less reactive towards nucleophilic substitution reactions.

(iii) Reduction of nitriles or cyanides 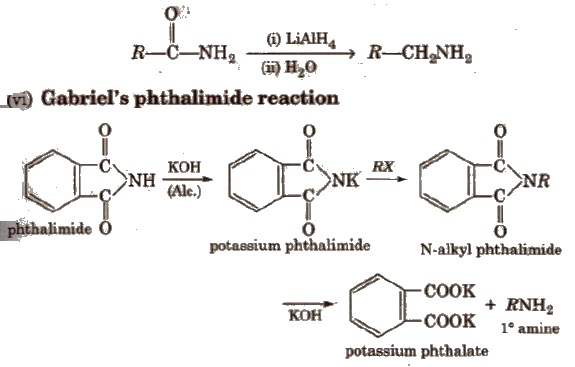 It only produces 1 0 amines. This method is not suitable for 1° arylamine because aryl halide does not give nucleophilic substitution reaction.

In Hofmann degradation reaction, the amine formed has one carbon less than the parent amide. To obtain primary amine with same number of carbon atoms from primary amide, reduction is done with LiAlH4/ether.

Amines act as Lewis bases due to the presence of lone pair of electrons on the nitrogen atom.

More the Kb (dissociation constant of base), higher is the basicity of amines.

Lesser the pKb‘ higher is the basicity of amines.

Aliphatic amines (CH3NH2) are stronger bases than NH3 due to the electron releasing +/ effect of the alkyl group.

Among aliphatic methyl amines, the order of basic strength in aqueous solution is as follows

Aromatic amines are weaker basesthan aliphatic amlnes and NH3,due to the fact that the electron pair on the nitrogen atom is involved in resonance with the π-electron pairs of the ring.

o-substituted aromaticamines are usually weaker basesthan aniline irrespective of the nature of substituent whether electron releasing or electron withdrawing. This is called ortho effect and is probably due to sterk and electronic factors.

(i) Alkylation All the three types of amines react with alkyl halides to form quaternary ammonium salt as the final product provided alkyl halide is present in excess.

Aromatic amines also undergo alkylation as given below. 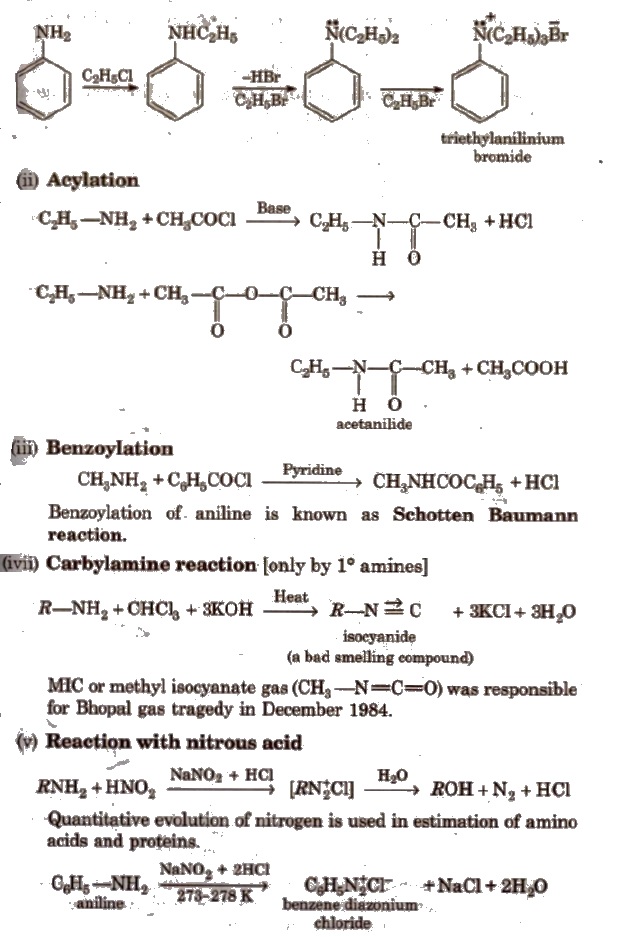 But secondary and _tertiary amines react with nitrous acid in different manner.

Tertiary amines does not react with benzenesulphonyl chloride.

(vii) Reaction with aldehydes Schiff base is obtained.

To prepare monosubstituted derivative, activating effect of -NH2 group must be controlled. It can be done by protecting the -NH2 group by acetylation with acetic anhydride. 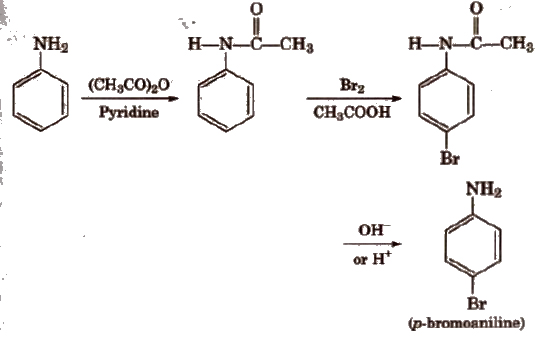 (b) Nitration Direct nitration of aniline is not possible as it is susceptible to oxidation, thus amino group is first protected by acetylation. 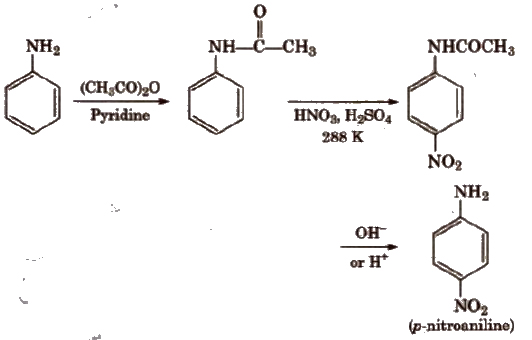 In strongly acidic medium, aniline is protonated as anilinium ion which is meta directing so it gives meta product also. 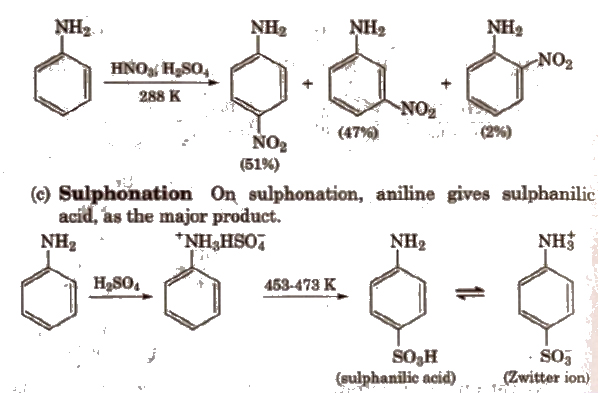 (d) Aniline does not undergo Friedel-Crafts reaction due to salt formation with aluminium chloride, the Lewis acid, which is used as a catalyst. Due to this, nitrogen of aniline acquires positive charge and hence. behave like a strong deactivating group for further chemical reaction.

(a) Fractional distillation This method Is based on the boiling points of amines and is used satIsfactorily in Industry.

(b) Hofmann’s methoOd Diethyloxalate is called Hofmann’s reagent with which mixture of amines is treated.

The excess acid in diazotisation reaction is necessary to maintain proper acidic medium for the reaction and to prevent combination of diazonium salt formed with the undiazotised amine.

Diazonium salts are prepared and used in aqueous solutions because in solid state, they explode.

It is a colourless crystalline solid, soluble in water. It has tendency to explode when dry.

It is relatively more stable than the alkyldiazonium salt. The arenediazonium ion is resonance stabilised as is indicated by the following resonating structures: 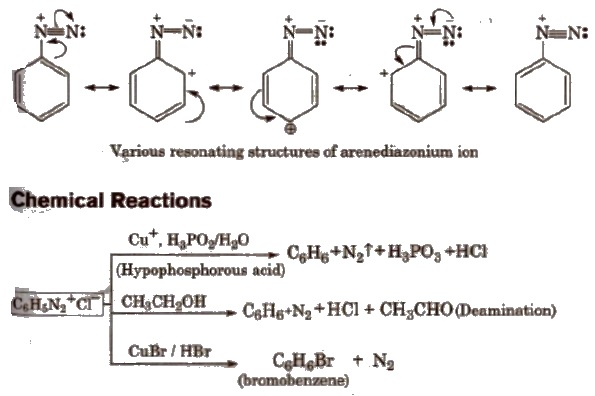 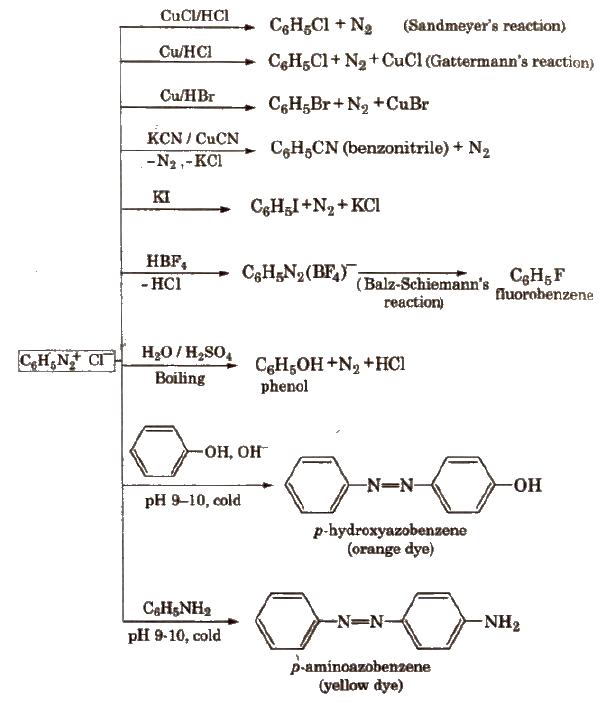 These compound have formula RCN. These are the derivatives of RCN.

According to IUPAC system, cyanides are named as ‘alkane nitrile’, e.g., 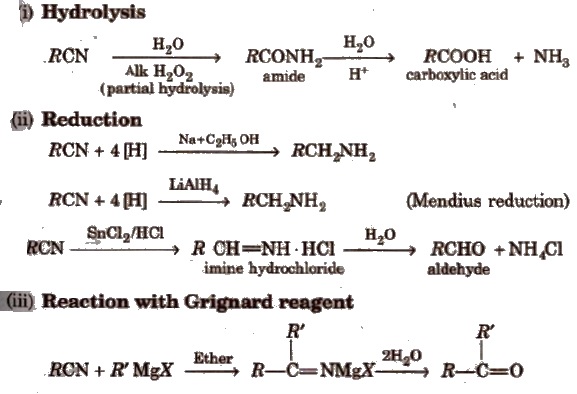 Accordinlg to IUPAC system, these are named as ‘alkane isonitrile’

(a) From alkyl halides 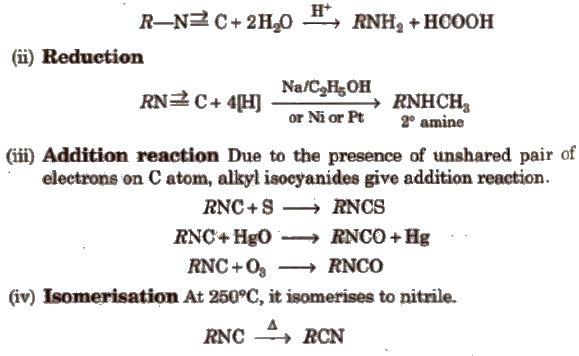 These are obtained by replacing one H of hydrocarbon by -NO2 group.

These are named according to IUPAC system as ‘nitro alkane’.

(i) From alkyl halides

(i) Reduction With Sn/HCl or catalytic hydrogenation, nitroalkanes are reduced to amines. 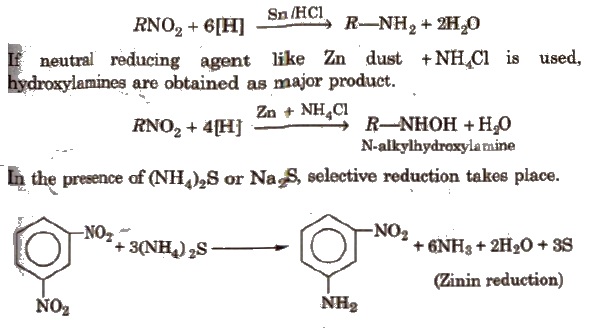 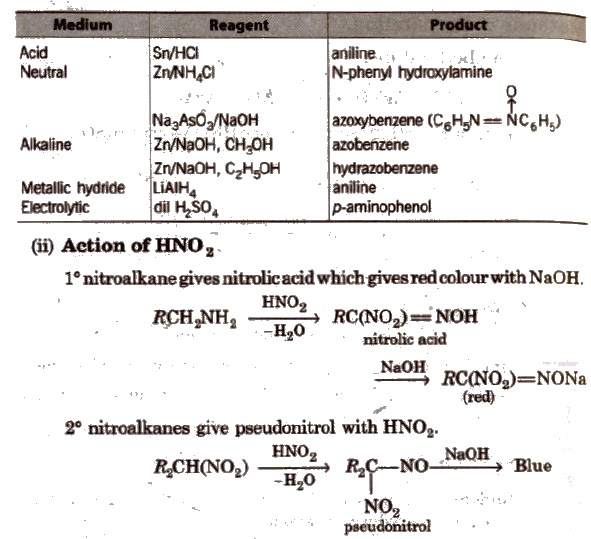 3° nitroalkanes does not react with HNO2

(iv) Electrophifie substitution On nitration, nitrobenzene gives m-dinitrobenzene (as -NO2 is a m-directing group and strongly deactivating).

It does not give Friedel-Craft’s alkylation. 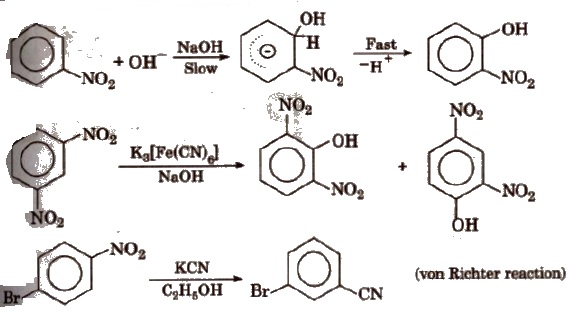