The word polymer has a Greek origin. which means many units (parts). Polymer is defined as a chemical substance of a high molecular mass formed by the combination of a large number of simple molecules, called monomers. e.g.,

The process by which the monomers get combined and transformed into polymers. is known as polymerisation.

Difference between Polymers and Macromolecules

Classification of Polymers Based on Source of Origin

Classification of Polymers Based on Structure

(i) Linear polymers These are the polymers in which the monomer units are linked to one another to form long linear chains. These linear chains are closely packed in space. The close packing results in high densities, tensile strength and high melting and boiling points. e.g., high density polyethene, nylon and polyesters are linear polymers.

(ii) Branched chain polymers In such polymers, the monomer units are linked to form long chains with some branched chains of different lengths with source. As a result of branching, these polymers are not closely packed in space. Thus, they have low densities, low tensile strength as well as low melting and boiling points. Some common examples of such polymers are low density polyethene, starch, glycogen etc.

(iii) Cross-linked polymers or network polymers In such polymers, the monomer units are linked together to form three dimensional network. These are expected to be quite hard, rigid and brittle. Examples of cross linked polymers are bakelite, glyptal, melamine-formaldehyde polymer etc.

Classification of Polymers Based on Mode of Polymerisation

Addition polymers can further be classified on the basis of the types
of monomers into the following two classes:

Homopolymers The polymers which are obtained by the polymerisation of a single type of monomer are called homopolymers.

Classification of Polymers Based on Molecular Forces

It involves formation of reactive intermediate such as free radical, a carbocation or a carbanion. For this polymerisation monomers used are unsaturated compounds like alkenes; alkadienes and their derivatives. Depending upon the nature of the reactive species involved. chain growth polymerisation occurs by the following mechanisms:

(ii) Cationic polymerisation It involves formation of carbocation which are generated by Lewis acids (like BF3, AICI3, SnCI4, etc.) and protonic acids such as H2SO4, HF, etc.

Higher the stability of carbocation intermediate, more is the reactivity of monomers towards cationic addition polymerisation. It involves the following steps: 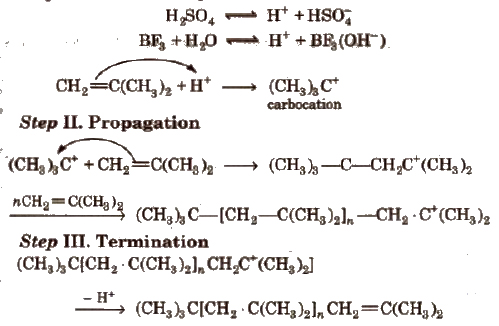 (iii) Anionic polymerisation It involves formation of a carbanion, Steps involved in this process are 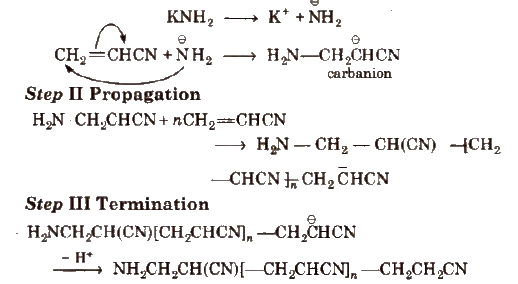 The growth of the polymer chain depends upon the availability of the monomers in the reaction. Thus, the polymer sample contains chain of varying lengths and hence, its molecular mass is always expressed as an average molecular mass.

It is determined by osmotic pressure method.

It is determined by light scattering and ultracentrifugation method.

Polymer of ethylene or ethene.

It is tough, flexible, transparent, chemically inert as well as poor conductor pf electricity. It has moderate tensile strength but good tearing strength.

It is used in the insulation of electricity carrying wires and manufacture of queeze bottles, toyes and flexible pipes.

It has high density due to close packing. It is also chemically inert and more tougher and harder.

The monomers are styrene molecules. It is thermoplastic. It is used for making toys, radio and TV cabinets

It is used for making rain coats, toys, electrical insulation. It is hard and resistant to heat and chemicals.

It is obtained by polymerising propylene in the presence of Ziegler-Natta catalyst.

It is chemically inert and resistant to attack by corrosive reagent. It is used in making oil seals, gaskets and also for non-stick surface coated utensils.

It is used as a substitute for wool in making commercial fibres as orIon or acrilan.

The polymers which contain an amide linkage in chain are known as pOlyamide, e.g., nylon-6, 6.

The polyamides are identified by numbers. These numbers refer to the number of carbon atoms in diamine and in the dibasic acid. As in the above case, the carbon atoms are 6 in each case, therefore the product is described as _nylon-66.

Nylon-66 is a linear polymer and has very high tensile strength. It shows good resistance to abrasion. Nylon-66 is usually fabricated into sheets. It is used in bristles for brushes and in textile

Nylon-6 is obtained by heating caprolactam with water at a high temperature. 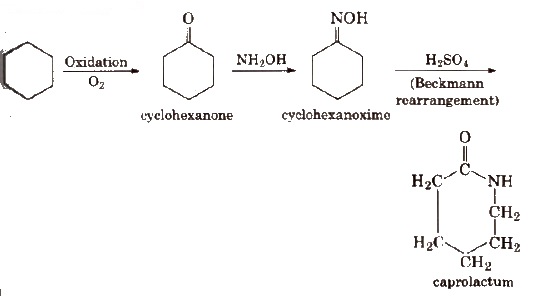 These polymers are obtained by the condensation reaction of phenol with formaldehyde in the presence of either acid or a base catalyst. The reaction involves the formation of methylene bridge at ortho, para or both ortho and para positions. A linear or cross linked material is obtained depending upon the condition of reaction. 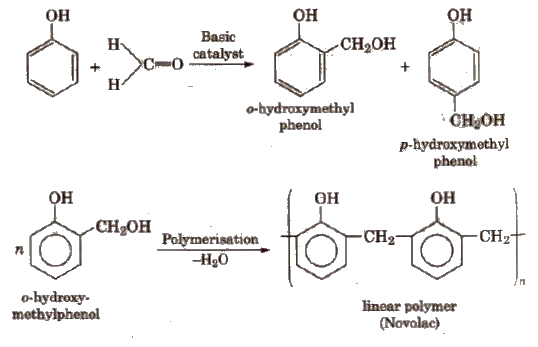 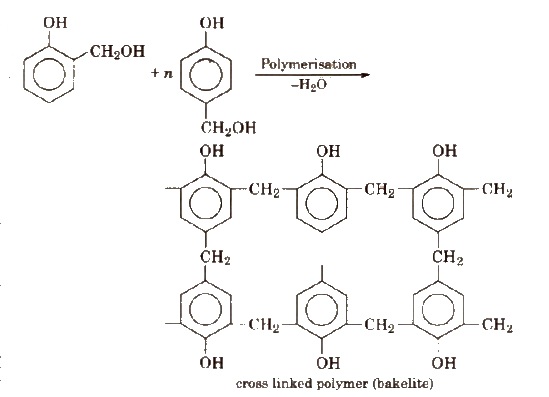 It is a copolymer formed by the polymerisation of melamine (which is a heterocyclic triamine) and formaldehyde as follows : 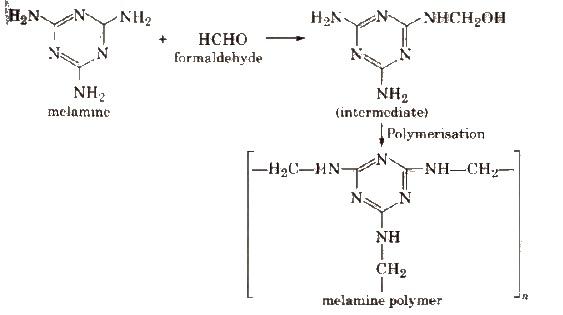 It is very hard and tough. It has assumed great importance these days particularly in making crockery. They do not break even when droped from a height.

Natural.rubber is a coiled linear 1, 4-polymer of isoprene.

In the natural rubber, there is no polar substituent. The only intermolecular forces are van der Waals’ type. The cis-configuration gives the polymeric chain of natural rubber a coiled structure. As a result, it can be stretched by the application of a force. When the force is removed, the chain returns back to its original coiled shape.

Vulcanisatlon is carried out by adding sulphur (3-5%) and zinc oxide to the rubber, and then heating the object at about 110°Cfor about 20-30 minutes. Zinc oxide accelerates the rate of vulcanisation. Vulcanisation introduces polysulphide (-S-S-) bonds between the adjacent chains. These crosslinks tend to limit the motion of chains relative to each other.

Polymer formed by polymerisation of chloroprene is neoprene or synthetic rubber.

It is used for the manufacturing conveyers belts, gasket and hoses.

It is a copolymer of buta-I, 3-diene and acrylonitrile. It is formed as follows 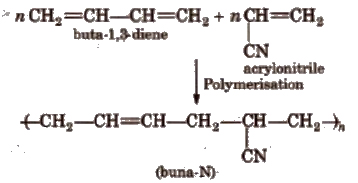 It is insulator in nature and is used for making conveyor belts and printing rollers.

The polymers which contain an ester linkage are known as polyester, e.g., dacron.

It is prepared by the polymerisation of methylmethacrylate in the presence of suitable organic peroxide.

The polymer is known by several commercial names such as lucite, acrylite, plexiglass and perspex.

It is a hard and transparent polymer and is quite resistant to the effect of light, heat and ageing. It is used, in the manufacture of unbreakable lights, protective coatings, dentures, and in making windows for aircrafts. 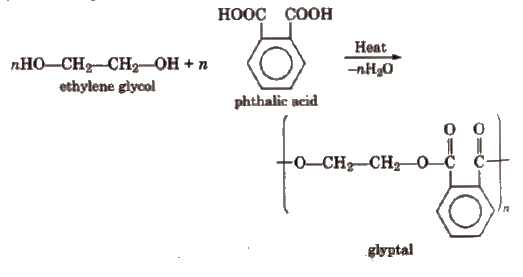 When its solution in a suitable solvent is evaporated, it leaves a tough but non-flexible film. It is, therefore, used in the manufacture of paints and lacquers.

It is a condensation product of ethylene glycol and terephthalic acid.

Polymerisation is carried out at 420 to 460 K in the presence of catalyst mixture of zinc acetate and antimony trioxide. 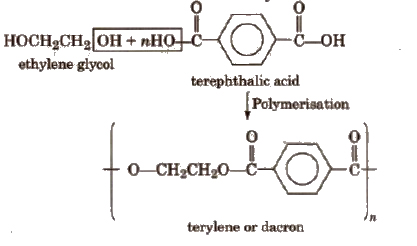 Terylene is highly resistant to the action of chemical and biological agents. Its fibres are quite strong and durable. It can also be blended with wool or cotton to obtain fabrics of desired composition.

Terylene is used in the manufacture of a variety of clothes such as terycot, terywool and terysilk as a result of blending with other yerns. It is also used for preparing magnetic recording tapes, conveyer belts, aprons for industrial workers etc.

Synthetic polymers are mostly non-biodegradable i.e., it is very difficult to dispose off the polymeric waste, e.g., polythene bags.

Nature has provided us a variety of polymers which can be produced by the biological systems in plants and animals. These are called biopolymers, e.g., polysaccharides, proteins, nucleic acids, etc. In the biological system, these polymers decompose or hydrolyse in the Presence of different enzymes. This means that they are biodegradable.

Aliphatic polyesters are the common examples of biodegradable Polymers.

It is a copolymer of 3-hydroxybutanoic acid and 3-hydroxypentanoic acid.

It is an alternating polyamide copolymer of glycine (H2N-CH2-COOH) and amino caproic acid [H2N(CH2) 5COOH] and is biodegradable.