Class VIII NCERT English Text Book Chapter 9 The Great Stone Face I is given below. 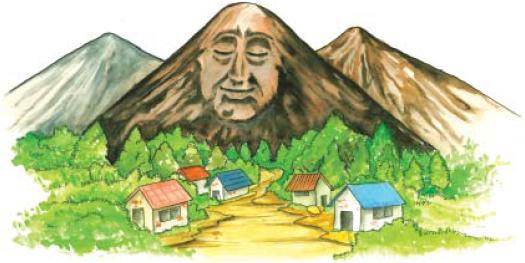 Seen from a distance, hilltops and huge rocks seem to assume various shapes. They may resemble an animal or  a human figure. People attribute stories to these shapes. Some stories come true; others don’t. The Great Stone  Face is one such shape that reminds the inhabitants of the valley of a prophecy. What was it? Did it come true?

One afternoon, when the sun was going down, a mother and her little boy sat at the door of their cottage, talking about the Great Stone Face. They had only to lift their eyes and there it was, plain to be seen, though miles away, with the sunshine brightening all its features.

And what was the Great Stone Face?
The Great Stone Face was a work of nature, formed on the perpendicular side of a  mountain by some immense rocks, which had been thrown together so that, when viewed at a proper distance, they resembled the features of a human face. If the spectator  approached too near, he lost the outline of the enormous face and could see only a heap of  gigantic rocks, piled one upon another. But seen from a distance, the clouds clustering  about it, the Great Stone Face seemed positively to be alive. It was the belief of many  people that the valley owed much of its fertility to the benign face that was continually  beaming over it.

A mother and her little boy, as we said earlier, sat at the door of their cottage, gazing at the  Great Stone Face and talking about it. The child’s name was Ernest. “Mother,” said he,  while the Great Face smiled on him, “I wish that it could speak, for it looks so very kindly  that its voice must indeed be pleasant. If I ever see a man with such a face, I should love  him very much.” 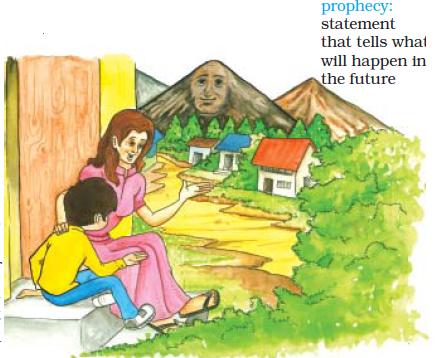 “If an old  prophecy should come to pass,” answered his mother,  “we may see a man some time,  with exactly such a face as that.” “What prophecy do you mean,  dear Mother?” eagerly inquired  Ernest. “Please tell me about it.” So his mother told him a story  that her own mother had told her,  when she herself was younger  than little Ernest; that, at some  future day, a child should be born near here, who was destined to  become the greatest and noblest  person of his time and whose face,  in manhood, should bear an exact resemblance to the Great Stone Face. Many still had faith in this old prophecy. But

others took it to be nothing but idle talk. At all events

the great man of the prophecy had  not yet appeared. “O, Mother,” cried Ernest, clapping his hands above his head, “I do hope  that I shall live to see him!”

His mother was an affectionate and thoughtful woman. It was  proper, she thought, not to discourage the fanciful hopes of her little  boy. So she said to him,

“Perhaps you may.”
And Ernest never forgot the story that his mother told him. It was always in his mind  whenever he looked upon the Great Stone Face. He spent his childhood in the log-cottage  where he was born, was dutiful to his mother and helpful to her in many things, assisting her much with his little hands, and more with his loving  heart. In this manner, from a happy yet often pensive child he grew up to be a mild and quiet youth.

Ernest had had no teacher, but the Great Stone Face became one to him. When the work  of the day was over, he would gaze at it for hours, until he began to imagine that those vast  features recognised him, and gave him a smile of kindness and encouragement.

About this time there went a rumour throughout the valley that the great man, who was to  bear a resemblance to the Great Stone Face, had appeared at last. It seems that, many  years before, a young man had left the valley and settled at a distant seaport. Gathergold,  which was his name, had set up as a shopkeeper and, being sharp in business matters, had become so very rich that it would have taken him a hundred years only to count his wealth. In time he thought  of his native valley, and decided to go back there, and end his days where he had been born.

Ernest had been deeply stirred by the idea that the great man, the noble man, the man of  prophecy, after so many ages of delay, was at length to be seen in his native valley. While  the boy was still gazing up the valley one day and imagining that the Great Stone Face returned his gaze, the noise of wheels was heard, and a  crowd of people cried. “Here  comes the great Mr Gathergold.”

A carriage, drawn by four horses, dashed round the turn of the road.  Within it, thrust partly out of the window appeared the face of an  old man with yellow skin.

“The very image of the Great Stone Face!” shouted the people. “Sure enough, the old  prophecy is true. Here we have the great man, at last!” And, what greatly puzzled Ernest,  they seemed actually to believe that here was the likeness which they spoke of. He turned  away sadly from the wrinkled shrewdness of that unpleasant face, and gazed up the valley,  where the Stone Face seemed to say: He will come! Fear not, Ernest; the man will come!

The years went on, and Ernest grew to be a young man. He attracted little notice from he  inhabitants of the valley. They saw nothing remarkable in his way of life, except that,  hen the labour of the day was over, he still loved to gaze upon the Great Stone Face.  heir idea was that this was a folly, but pardonable, because Ernest was industrious, kind and  neighbourly.

naturally, in the fields and at the fireside, were of a higher tone than those which all men  shared with him. A simple soul — simple as when his mother first told him the old story —  he beheld the marvellous face looking down the valley, and still wondered, why its human likeness was so long in coming.

By this time poor Mr Gathergold was dead and buried. His wealth,  which was the body and spirit of his existence, had disappeared before his death. Since the  melting away of his gold, it had been generally agreed that there was no great likeness, after  all, between the ruined merchant and the majestic face upon the mountain.

It so happened that another son of the valley had become a soldier many years before. After a great deal of hard  fighting, he was now a famous commander. He was known on the battlefield by the name of Blood-and- Thunder. Old and tired now, he had lately expressed a desire to return to his native valley. The inhabitants, his old neighbours and their grown up children, prepared to welcome the renowned commander. It was being said  that at last the likeness of the Great Stone Face had actually appeared. Great, therefore, was the excitement throughout the valley, and many people who had never  once thought of glancing at the Great Stone Face now spent much time in gazing at it, for the sake of knowing  exactly how General Blood-and-Thunder looked.

On the day of the general’s arrival, Ernest and all the other people of the valley left their  work, and proceeded to the spot where a great banquet had been prepared. Soldiers stood on  guard, flags waved and the crowd roared. Ernest was standing too far back to see Blood-and- Thunder’s face. However, he could hear several voices. “It’s the same face, exactly!” cried one  man, dancing for joy. 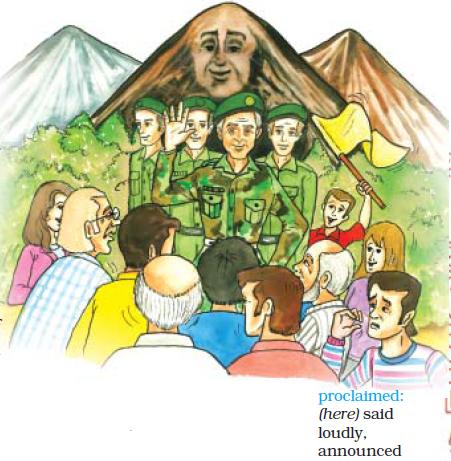 “Wonderfully like it, that’s a fact!”  replied another. “And why not?” cried a third; “he’s the greatest  man of this or any other age,  beyond a doubt.”

Ernest at last could see the  general’s face; and in the same glance, to the side, he could also  see the Great Stone Face. If there  was such a likeness as the crowd proclaimed, Ernest could not  recognise it.

“Fear not, Ernest,” said his heart,  as if the Great Stone Face was  whispering to him, “fear not,   Ernest; he will come.”

Write ‘True’ or ‘False’ against each of the following statements.

1. The Great Stone Face stood near where Ernest and his mother lived. ______

2. One would clearly distinguish the features of the Stone Face only from a distance. ______

6. The Great Stone Face seemed to suggest that Ernest should not fear the general. ______

(ii) What did young Ernest wish when he gazed at it?

2. What was the story attributed to the Stone Face?

3. What gave the people of the valley the idea that the prophecy was about to come true for the first time?

4. (i) Did Ernest see in Gathergold the likeness of the Stone Face?

(ii) Who did he confide in and how was he proved right?

5. (i) What made people believe General Blood-and-Thunder was their man?

(ii) Ernest compared the man’s face with the Stone Face. What did he conclude?

1. Look at the following words.

The words on the left are adjectives and those on the right are their noun forms.

Write the noun forms of the following words by adding -ness or -ity to them appropriately. Check the spelling of the new words.

2. Add –ly to each of the following adjectives, then use them to fill in the blanks.

3. Complete each sentence below using the appropriate forms of the verbs in brackets.

1. Imagine you are Ernest. Narrate the story that his mother told him. Begin like this: My mother and I were sitting  at the door of our cottage. We were looking at the Great Stone Face. I asked her if she had ever seen any one who  looked like the Stone Face. Then she told me this story.

2. Imagine you are Gathergold. Write briefly the incident of your return to the valley.

Begin like this: My name is  Gathergold. I left the valley of the Great Stone Face fifty years ago. I am now going back home. Will the people of  the valley welcome me? Do they know that I am very rich?