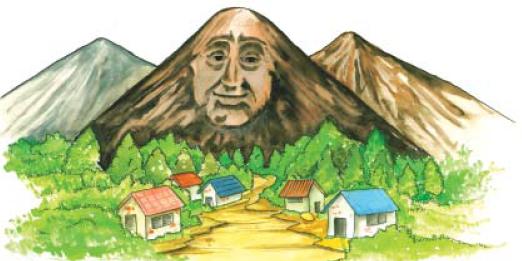 Many years passed. Ernest was now a man of middle age. To his neighbours, who never suspected that he was  anything more than an ordinary and familiar face, he was only a humble and hardworking, though thoughtful,  person. But what about the old prophecy? Was it ever fulfilled? Let us read and find out.

The years hurried on, and brought white hairs upon the head of Ernest, and made wrinkles  across his forehead and furrows in his cheeks. He was an old man. But not in vain had he  grown old; more numerous than the white hairs on his head were the wise thoughts in

his mind. And Ernest had ceased to be obscure. Unsought for, undesired, had come the fame  which so many seek. He had become famous beyond the limits of the valley. College  professors, and even the active men of cities, came from far to see and converse with Ernest,  nd he received them with gentle sincerity, and spoke freely with them of whatever came uppermost, or lay deepest in his heart or their own. While they talked together, his face would brighten, unawares, and shine upon them, as with a mild evening light.

While Ernest had been growing old, God had granted a new poet to this earth. He, too, was a  native of the valley, but had spent the greater part of his life in distant cities, pouring out his  sweet music everywhere. Neither was the Great Stone Face forgotten, for the poet had celebrated it in a poem. The songs of this poet found  their way to Ernest. He read them after  is customary toil, seated on the bench before his cottage door. As he read he lifted his eyes to the mountain.

“O Great Stone Face,” he said, “is not this man worthy to be your likeness?” The face seemed  to smile, but did not answer. Now it happened that the poet, though he lived so far away, had  not only heard of Ernest but had thought much about his character and wished to meet this  man whose wisdom walked hand in hand with the noble simplicity of his life. One summer  day, therefore, he arrived at Ernest’s door, where he found the good old man holding a book in his hand, which  he read and, then, with a finger between the leaves, looked lovingly at the Great Stone Face.

“Good evening,” said the poet. “Can you give a traveller a night’s shelter?” “Gladly,”  answered Ernest; and then he added, smiling, “I think I never saw the Great Stone Face look
so hospitably at a stranger.” 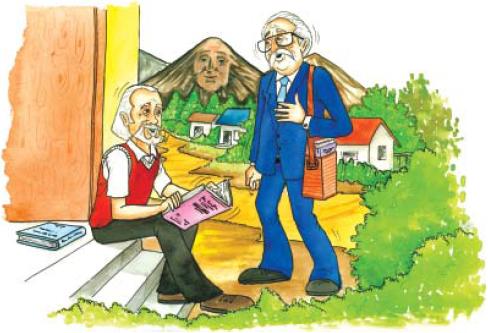 The poet sat down beside him, and he and Ernest talked together. Never  before had the poet  talked with a man like  Ernest, so wise, and  gentle, and kind. Ernest, on the other hand, was   moved by the living  images flung out of the  poet’s mind.

As Ernest listened to the poet, he imagined that the Great Stone Face was  bending forward to listen   too. He gazed into the  poet’s eyes. “Who are  you, my gifted guest?” he   asked.

The poet laid his finger on the book that Ernest had been reading. “You have read these poems,” said he. “You  know me, then, for I wrote them.” Again and again, Ernest examined the poet’s features; he turned towards the  Great Stone Face then back. He shook his head and sighed. “Why are you sad?” inquired the poet. “Because,”  replied Ernest, “all through life I have awaited the fulfillment of a prophecy, and when I read these poems, I  hoped that it might be fulfilled in you.” “You hoped,” answered the poet, faintly smiling, “to find in me the  likeness of the Great Stone Face. I am not worthy to be its likeness.”

“And why not?” asked Ernest. He pointed to the book. “Are not those thoughts worthy?”  “You can hear in them the distant voice of a heavenly song. But my life, dear Ernest, has  not corresponded with my thoughts. I have had grand dreams, but they have been only  dreams. Sometimes I lack faith in my own thoughts. Why, then, pure seeker of the good  and true, should you hope to find me in the face of the mountain?”

The poet spoke sadly and his eyes were wet with tears. So, too, were those of Ernest. At the  hour of sunset, as had long been his custom, Ernest was to speak to a group of neighbours in  the open air. Together he and the poet went to the meeting place, arm in arm. From there  could be seen the Great
Stone Face.

Ernest threw a look of familiar kindness around upon his audience. He began to speak to  the people what was in his heart and mind. His words had power, because they agreed with  his thoughts; and his thoughts had reality and depth, because they harmonised with the life which he had always lived. It was not mere breath  that the preacher uttered; they  were the words of life. A life of good deeds and selfless love was melted into them. The  poet, as he listened, felt that the life and character of Ernest were a nobler strain of poetry  than he had ever written. His eyes filled with tears and he said to himself that never was  there so worthy a sage as that mild, sweet, thoughtful face, with the glory of white hair diffused about it.

At a distance, but clearly to be seen, high up in the golden light of the setting sun,  appeared the Great Stone Face, with white mists around it, like the white hairs around the  brow of Ernest. At that moment, Ernest’s face took on an expression so grand that the  poet was moved to throw his arms up and shout. “Behold! Behold! Ernest is himself the  likeness of the Great Stone Face!” 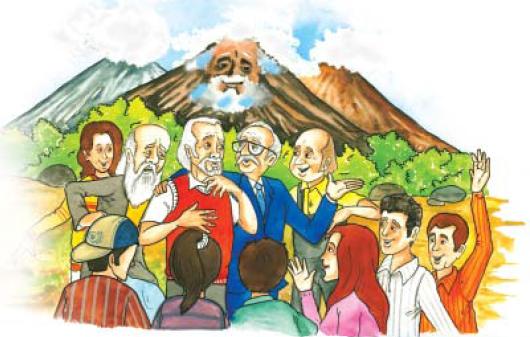 Then all the people looked, and saw that what the poet said was true. The prophecy was fulfilled. But Ernest,  having finished what he had to say, took the poet’s arm, and walked slowly homeward, still hoping that some  wiser and better man than himself would by and by appear, bearing a resemblance to the Great  Stone Face.

Write ‘True’ or ‘False’ against each of the following statements.

2. Total strangers from far away, who visited Ernest in the valley, found his face familiar. ______

3. The Great Stone Face confirmed Ernest’s view that the poet could be worthy of its likeness. ______

4. When Ernest and the poet met, they respected and admired each other equally. ______

5. The poet along with Ernest addressed the inhabitants of the valley. ______

6. The poet realised that Ernest’s thoughts were far nobler than his own verses. ______

1. How was Ernest different from others in the valley?

2. Why did Ernest think the poet was like the Stone Face?

3. What did the poet himself say about his thoughts and poems?

4. What made the poet proclaim Ernest was the Stone Face?

5. Write ‘Ernest’ or ‘Poet’, against each statement below.

(i) There was a gap between his life and his words.

(ii) His words had the power of truth as they agreed with his thoughts.

(iii) His words were as soothing as a heavenly song but only as useful as a vague dream.

(iv) His thoughts were worthy.

(v) Whatever he said was truth itself.

(vi) His poems were noble.

(vii) His life was nobler than all the poems.

(viii) He lacked faith in his own thoughts.

(ix) His thoughts had power as they agreed with the life he lived.

(x) Greatness lies in truth. Truth is best expressed in one’s actions. He was truthful, therefore he was great.

6. (i) Who, by common consent, turned out to be like the Great Stone Face?

(ii) Did Ernest believe that the old prophecy had come true? What did he say about it?

1. Mark the meaning that best fits the word or a phrase in the story.

(a) proverb
(b) prediction
(c) rumour

(a) wonderful
(b) surprising
(c) shocking

(a) wandered about
(b) stared at
(c) thought of

(x) took on (an expression)

(a) challenged
(b) resembled
(c) assumed

2. (i) Read the following sentences.

(b) He will come! Fear not, Ernest; the man will come.

(d) Blood-and-Thunder starts his journey back to the valley next week, everyone proclaimed.

(e) The great man is going to spend his old age in his native town.

Notice that in the above sentences, verbs in bold type are in four different forms, denoting four important ways  of expressing future time. None of these can be said to be exclusively used to show future time, though each is  used to refer to some action in future.

(ii) Which form of the verb is more natural in these sentences? Encircle your choice.

(a) I’m not free this evening. I will work/am working on a project.

(b) Have you decided where you will go for your higher secondary? Yes, I have. I will go/am going to the  Kendriya Vidyalaya.

(c) Don’t worry about the dog. It won’t hurt/isn’t hurting you.

(d) The weatherman has predicted that it will snow/is snowing in Ranikhet tonight.

(e) Swapna can’t go out this evening. Her father will come/is coming to see her.

3. (i) Complete these pieces of conversation using will or going to with the verbs given.

(a) Rani : Why are you turning on the radio?

(d) Rani : What shall we have for dinner?

Rani : Make up your mind.

(e) Rani : Why are you filling the kettle with water?

(f) Rani : We need some bread and butter for breakfast.

1. Each of the following words has the sound/f/ as in feel. The words on the left have it initially. Those on the right have it finally. Speak each word clearly.

2. Underline the letter or letters representing/f/in each of the following words.

3. Imagine that you are the poet. You have come to your native valley to meet a famous preacher called Ernest.  Narrate the incident of your first meeting with him.

4. (i) Put each of the following in the correct order to construct sentences.

(ii) Now rearrange the sentences above to construct a paragraph.