Class 12th Economics Chapter 1 – Introduction NCERT Solution is given below.

Question 1. Discuss the central problems of an economy.

Answer We know that resources are limited In relation to the unlimited wants, it is important to economise their use and utilise them in the most
efficient manner.

It leads to following central problems, that are faced by every economy.

(i) What to Produce?

There is limited resources and thus producers can not produce all the goods, in an economy.

Thus. it is difficult to allocate the resources efficiently and effectively.

(iii) For Whom to Produce?

Due to lack of resources in every economy, can not satisfy all the wants of its people.

So, there is problem to select the category of people who consume the goods. Whether to produce goods for rich section or poor section of society or more for rich and less for poor section.

Question 2. What do you mean by the production possibilities of an economy?

Answer We have scarce resources and there is a problem exist what to produce and in what quantity. Thus, we are taking the help from the
production possibility curve. It tells us how we can combine two goods the can be produced with the given resources on the assumptions
(a) resources are fully and efficiently utilised and (b) technique of production remains constant or we can say produced possibility impllies
the possible situation to produce two goods with given resources an technology.

Question 3. What is a production possibility frontier? 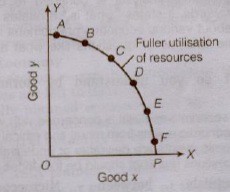 Question 5. Distinguish between a centrally planned economy and a market economy.

Question 6. What do you understand by positive economic analysis?

Answer Positive economic analysis is confined to cause and effect relationship. In other words, it states “what is.” It relates to what the facts are, were or will be about various economic phenomena in the economics. e.q., it deals with the analysis of questions like what are the causes of unemployment.

Question 7. What do you understand by normative economic analysis?

Answer Normative economic analysis is concerned with what ‘ought to be’. It examines the real economic events from moral and ethical angles and judge whether certain economic events are desirable or undesirables. e.g., it deals with the analysis of questions like what should be the prices of food grains.