Class 12th Economics Chapter 3 – Production and Costs NCERT Solution is given below.

Question 1. Explain the concept of a production function.

Answer It is the technological knowledge that determines the maximum levels of output that can be produced using different combinations of inputs. If the technology improves, the maximum levels of output obtainable for different input combinations increase. Then we have a new production
function. e.g., A firm produce a product (Y) by using two inputs X1 and  X2.
Then production function can be expressed as
qy =: f (X1.X2)

Question 2. What is the total product of an input?

Answer Total product means the total quantity of goods produced by a firm during a given period of time with given inputs.

Question 3. What is the average product of an input?

Answer Average product is defined as the output produced per unit of variable input. Calculated as AP=TP/L

Question 4. What is the marginal product of an input?

Answer Marginal product refers to the additional output produced, when one more unit of variable factor is employed. Calculated as

Question 5. Explain the relationship between the marginal products and the total product of an input. 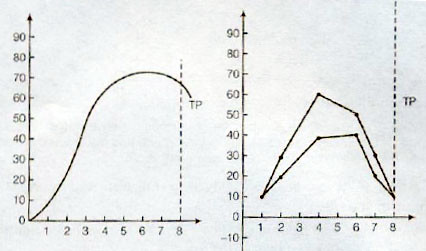 Relation between TP and MP
(i) When MP increases, TP increases at increasing rate.
(ii) When MP starts diminishIng. TP Increases only at diminishing rate.
(iii) When MP= D.TP is maximum.
(iv) When MP is negative,  TP is declinillg.

Question 6. Explain the concepts of the short run and the long run.

Long run  refers to a period in which output can be changed by changing. all factor of production In the long run firm can change its factory size, techniques of production, purchase new plant machinery, patents etc

Question 7. What is the law of diminishing marginal product?

Answer Law of diminishing marginal product means that when more and more units of a variable factors are employed along with a fixed factor, the
marginal product of the factor must fall. e.g.

Question 8. What is law of variable proportions?

Answer The law which exhibits the relationship between the units of a variable factor (Keeping all other factors constant) and the amount of output
in the short-run known as law of variable proportion.

Question 9. When does a production function satisfy constant returns to scale?

Question 10. When does a production function satisfy increasing returns to scale?

Answer A production function satisfy increasing  returns, when every additional variable factor adds more and more to the total output. It means
TP Increase at an increasing order and MP also increases

Question 11. When does a production function satisfy decreasing returns to scale?

Answer A production function satisfy decreasing returns, when every additional variable factor adds lesser and lesser amount of output. It means
TP increases at a diminishing rate and MP falls with increase in variable  factor

Question 12. Briefly explain the concept of the cost function.

Question 13. What are the total fixed cost, total variable cost and total cost of a firm? How are they related?

Answer Total Fixed Cost The cost which does not change with the change In output. Even when output is zero. In other words, fixed costs are the sum total expenditure on the purchase or hiring of fixed factors of production.

Total Variable Cost The cost which change with the change in output.
In other words. variable costs are the expenditure incurred on the use of variable factors of production

Total cost is the sum total of total fixed cost and total variable cost at various level of output Relation among TFC, TVC and TC 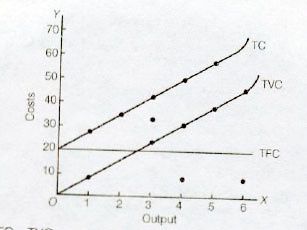 Question 14. What are the average fixed cost, average variable cost and average cost of a firm? How are they related?
Answer
(i) Average Fixed Cost (AFC) It refers to the per unit fixed cost of production Calculated as AFC= TFC/Q

(iii) Average Cost (AC) It refers to the per unit total cost of production. Calculated as AC=TC/Q

Question 15. Can there be some fixed cost in the long run? If not, why?

Answer No, there are no fixed costs in the long-run as all the factors are variable Fixed cost exists only in the short run

Question 16. What does the average fixed cost curve look like? Why does it look so?

Answer The curves of short-run marginal cost, average variable cost and average cost are U shaped.

Question 19. At which point does the SMC curve cut the SAC curve? Give reason in support of your answer.

Question 21. What do the long run marginal cost and the average cost curves look like?

Answer Long run marginal cost and the average costs curve is U shaped but fallter than shortrun U-shaped.

Question 26. The following table gives the total cost schedule of a firm. It is also given that the average fixed cost at 4 units of output is  Rs5. Find the TVC, TFC, AVC, AFC, SAC and SMC schedules of the firm for the corresponding values of output.

Question 27. A firm’s SMC schedule is shown in the following table. The total fixed cost of the firm is Rs 100. Find the TVC,TC,AVC and SAC
schedules of the firm.

Question 30. Find out the maximum possible output for a firm with zero unit of Land 10 units of K when its production function is Q = 5L + 2K