Question 1. What would be shape of demand curve, so that the total revenue curve is

(i) Demand curve or AR curve will be a horizontal straight parallel to the X-axis because positively sloped straight line TR curve passing, through
the origin indicates that price remains constant at all level of output. 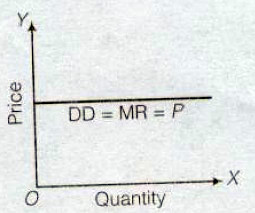 (ii) Demand curve will slope downwards from left to right because horizontal TR indicates that TR remains same at levels of output. It is possible only when price falls with rise in output 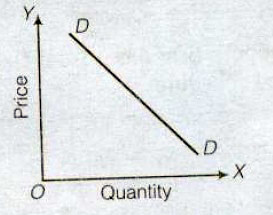 Question 2. From the schedule provided below calculate the total revenue, demand curve and the price elasticity of demand.

Question 3. What is the value of the MR when the demand curve is elastic?

Answer When the demand curve is elastic, then MR will be positive. It means e > 1 and 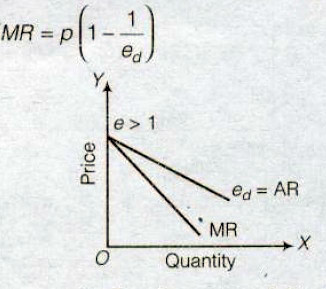 Question 4. A monopoly firm has a total fixed cost of Rs 100 and has the following demand schedule

The total cost of the monopolist firm is zero. the profit will be maximum where TR is maximum. As, in the above case, TR is maximum at the 6th unit
of output.

Question 5. If the monopolist firm of exercise 3, was a public sector firm. The government set a rule for its manager to accept the government fixed price as given i.e., to be a price taker and therefore behave as a firm in a perfectly competitive market) and the government decide to set the price so that demand and supply in the market are equal. What would be the equilibrium price, quantity and profit in that case? 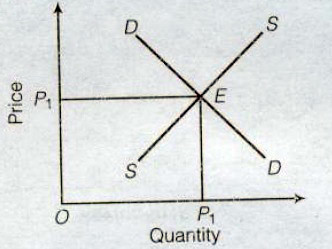 In a perfectly competitive market a firm earns zero profit. It implies that a competitive firm can get only normal profit

Question 6. Comment on the shape of MR curve in case the TR curve is a
(i) Positively sloped straight line.
(ii) Horizontal straight line.

Question 7. The market demand curve for a commodity and the total cost for a monopoly firm producing the commodity is given by the . schedules below. Use the information to calculate the following

Question 8. Will the monopolist firm continue to produce in the short run if a loss is incurred at the best short run level of output?

Question 9. Explain why the demand curve facing a firm under monopolistic competition is negatively sloped.

Answer Demand of the product is not in the central 01 monopoly firm because it has no close substitutes. In order to increase the output to be
sold. monopolist will have to reduce the price. Therefore. monopoly firm faces a downward sloping demand curve. 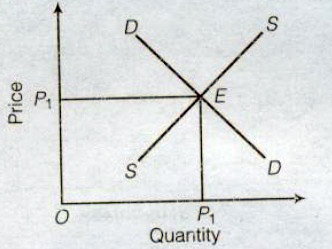 In figure. at price OP,firm can sell OQ quantity. Demand rises to OQ1 the price is reduced to OP So. demand curve under monopoly is negatively sloped as more quantity can be sold only at a lower price

Question 10. What is the reason for the long run equilibrium of a firm in monopolistic competition to be associated with zero profit?

Answer In monopolistic competition the number of firms is large. There is free entry and exit of firms. The goods produced are differenciated. tn the
short run a firm may earn abnormal profit which attracts the new firms. It will expand the output of the commodity. It will cause fall in the market price of the commodity. Thus phenomenon of entry of firms, expansion of output and falling of price will continue till profit become zero. At this level of profit there will be no attraction for new firms to enter in the market. Contrary to it if firms are facing losses in the short run. Some firms would
stop producing the commodity. It results in contraction of output that will dead to a higher price. The exit would half once profits become zero.
Thus, entry or exit of firms in long run half once profits become zero and this would serve as the long run equilibrium.

Question 11. List the three different ways in which oligopoly firms may behave.

Answer Following are the three different ways in which oligopoly firm may behave.
(i) Duopoly firms may callude together and decide not to compete with each other and maximise total profits.
(ii) Each of the two firms decide how much quantity to produce and would not change the quantity that is supplying
(iii) In oligopoly the market price does not move freely in response to changes in demand.

Question 12. If duopoly behavior is one that is described by Cournot, the market demand curve is given by the equation q = 200 – 4p and both the firms have zero costs, firms the quantity supplied by each firm in equilibrium and the equilibrium market price.

The quantity supplied by firm A and firm B is represented in the table below. 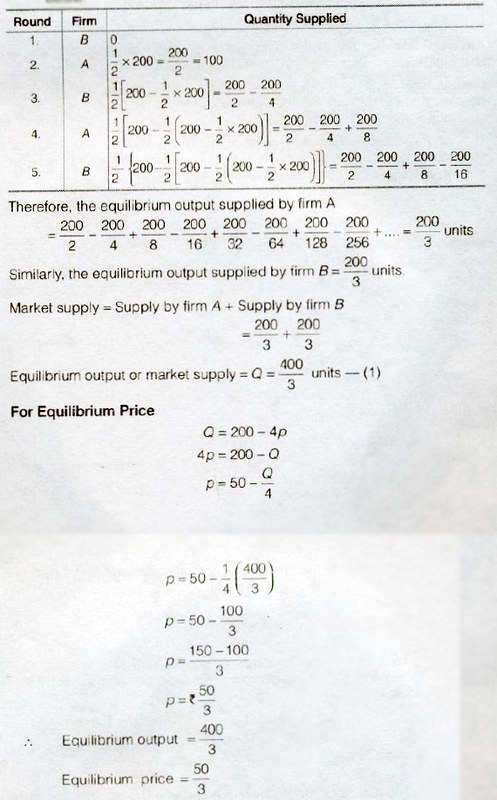 Question 13. What is meant by prices being rigid? How can oligopoly behavior lead to such an outcome?

Answer Price rigidity means price under oligopoly lends to be fixed or constant despite the changes in demand and cost in the industry. The oligopoly firms react after change in price initiated by any firm, The firm believes that its rivals will react after the analysis of what the changes made
by oligopoly firm, The firm believes that if It raises the price the rivals will not follow it but if the firms cuts down the price the rival firms will also do the same Thus. in oligopoly firm prefers to stick at the existing price.