Question 1. Differentiate between balance of trade and current account balance,

Answer Different between balance of trade and current account balance

Question 2. What are official reserve transactions? Explain their importance in the balance of payments.

Answer Official reserve refers to that the monetary authority (central bank) is financed the any deficit in the balance of payment. Official reserve
transactions take place when a country with draws from its stock of foreign exchange reserves to finance deficit in its overall balance of payment. A country wilh surplus in its overall BOP leads to rise in foreign exchanges reserves.

Importance Official reserve transactions help to bring a balance In the country’s overall balance of payment. So, it plays an important role in
economy of any country.

Question 3. Distinguish between the nominal exchange rate and the real exchange rate.If you were to decide whether to buy domestic goods or foreign goods, which rate would be more relevant? Explain.

Real Exchange Rate It refers to the relative price of foreign goods interns of domestic goods.

To buy domestic goods of foreign goods, at a point of time nominal exchange rate is more relevant.

Question 5. Explain the automatic mechanism by which BOP equilibriumwas achieved under the gold standard.

Answer The country from which we were importing and marking payment in gold would face an increase in prices and cost. There would be dis equilibrium. Normally the BOPof the country losing gold, and worsen that of the country with the favourable trade balance, until equilibrium In international trade is re-established at relative prices that keep Import and export In balance with no further net gold flow. Thus, fixed exchange rates were maintained by an automatic equilibrating mechanism.

Sources of demand for foreign exchange

Source of supply of foreign exchange 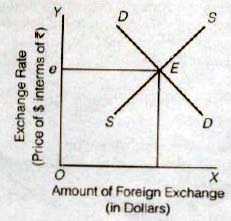 In the figure, the equilibrium exchange rate i.e., E

Question 7. Differentiate between devaluation and depreciation

Answer Different between devaluation and depreciation

Question 8. Would the central bank need to intervene in a managed floating system? Explain

Answer Managed floating is a system that allows adjustment in exchange rate according to set of rules and regulations which are officially declared in the foreign market. Under this system, also called dirty floating, central banks intervene to buy and sell foreign currency in an attempt to moderate exchange rate movements whenever they feel that such action are appropriate. Official reserve transaction are, therefore, not equal to zero.

Question 9. Are the concepts of demand for domestic goods and domestic demand for goods the same?

Answer Marginal propensity to import indicates the extent to which imports are induced by changes in income of production.

When income increase aggregate demand decreases. This is because the additional income is spent on foreign goods and not on domestic goods.

Question 11. Why is the open economy autonomous expenditure multiplier smaller than the closed economy one?

Question 12. Calculate the open economy multiplier with proportional taxes, T = tY, instead of lump-sum taxes as assumed in the text 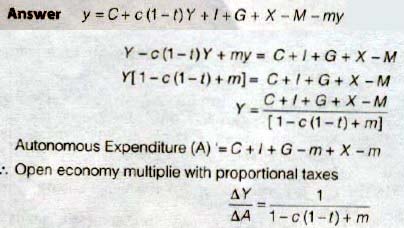 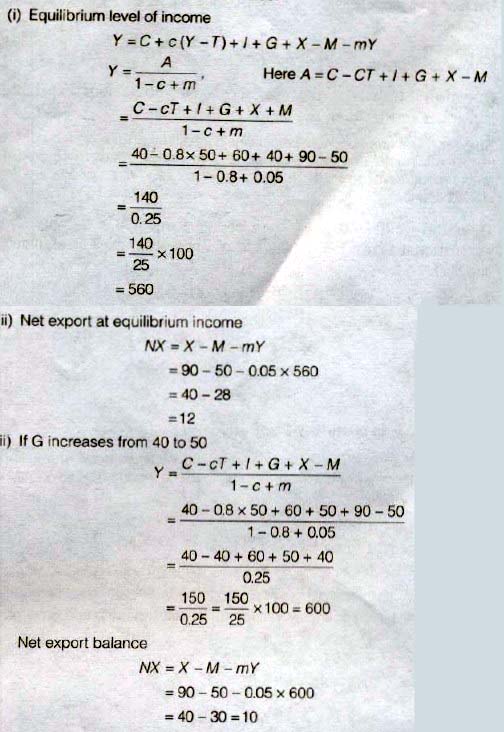 Question 14. In the above example, if exports change to X = 100, find the change in equilibrium income and the net export balance 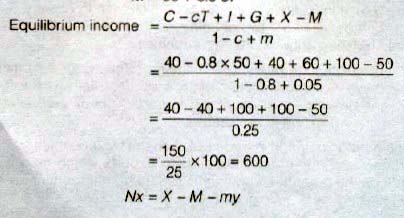 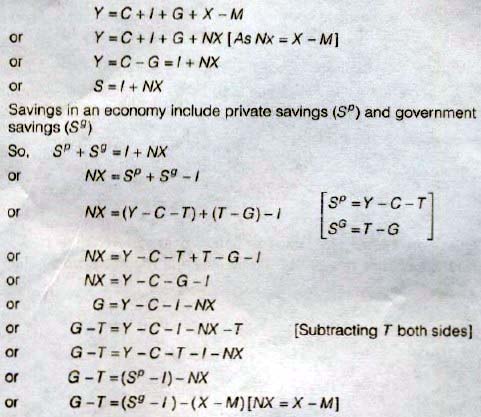 Answer The exchange rate is one of the most important determinant of a country. It plays a vital role in the country’s level of trade As per the above condition it is favourable for country A to import goods and on the other hand for country B export is favourable.

There would be no balance in trade between the two countries as country A is importing more goods as compared to exports which results in trade
deficit and on the other hand country B suffers from trade surplus because they are focusing more on exports than imports.

Question 17. Should a current account deficit be a cause for alarm? Explain.

Answer A current account deficit means that the value of imports for goods and services are greater than the value of exports it leads to several
causes which are
(i) Due to fixed exchange rate exports will become uncompetitive.
(ii) Economic growth is not favourable.
(iii) Inflation and borrowings become the major problems.

Thus, we can say that current account deficit be a cause for alarm because the that value of exports increased at a slow rate than the imports and there is an increase in the deficit or we can say surplus changed Into deficit. 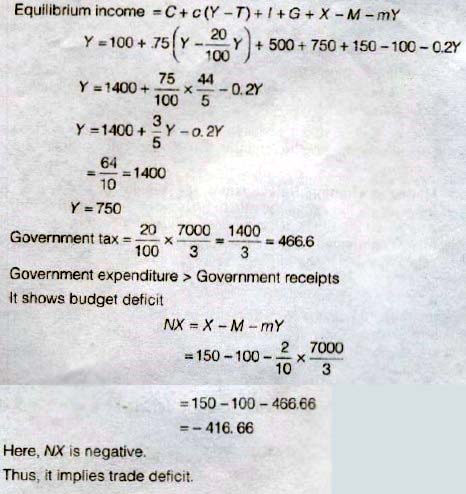 Question 19. Discuss some of the exchange rate arrangements that countries have entered into the bring about stability in their external accounts.

Answer Exchanqe rate expresses the ratio of exchange between the currencies of two countries.

Mostly three exchange rate used to bring about stability In their external accounts by countries.

1. Fixed Exchanged Rate The exchange rate that is official fixed and declared by the government.

There are two kinds of fixed exchange rate

(i) Gold Standard System As per this system gold was taken as the common unit of parity between currencies of different countries in the circulation. Each country was to define value of its currency in terms of the other currency was fixed considering gold value of each currency.
(ii) The Bretton Woods System As per this system all currencies were pegged or related to US dollar at a fixed exchange rate This system gave birth to international and monetary fund as the central institution in the international monetary system.

2. Flexible Exchange Rate The exchange rate which is determined by the forces of demand and supply of different and currencies in the foreign exchange market.

It is a flexible rate because the value of currency is allowed to fluctuate according to change in demand and supply of foreign
exchange.