Depending upon the electrical conductivities the solids are classified in given three types:-

Explanation of behavior of conductors, insulators and semiconductors on the basis of bond theory:-

1. In case of metals [conductor]:- In conductor valance bond is partially filled with electrons and it overlaps with higher energy or unoccupied conduction band thus electrons can easily flow on application of electrical field thus metals have high conductivity. 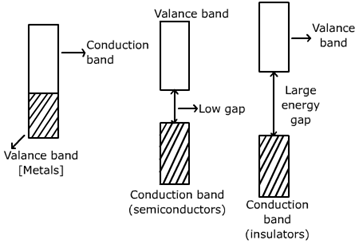 Effect of temperature on conductivity:-