Electro kinetic or Zeta Potential:- when one type of the ions of the electrolyte are adsorbed on the surface of colloidal particles it forms a “Fixed layer”. It attracts the opposite ions to form another layer called “diffused layer”.

As a result, a difference of potential exists between the fixed layer and the diffused layer. This potential difference is known as electro kinetic or zeta potential. 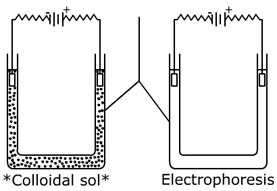 Electro-osmosis:- it may be defined as a phenomenon in which the molecules of the dispersion medium are allowed to move under influence of an electric field where as colloidal particles are not allowed to move.