Success Tips from Shubham Acharya Who Scored 98.4 % in CBSE 12th

Meet the prodigy kid, Shubham Acharya, from Bhubaneshwar who has scored 98.4% in CBSE 12th Exam 2016 to become the topper of Bhubaneshwar Region that includes Orissa, West Bengal & Chattisgarh. Not only that he also scored 305 out of 360 in JEE Main, 426 in BITSAT, possesses International Rank 1 in NCO, International Rank 2 in IEO, topper of the state in IMO, ranked in the Top 35 in the Indian National Olympiad in Chemistry and Top 300 in Physics. Yeah seriously! Shubham has plans to do something good for the country. Read the complete interview of this CBSE 12th Topper 2016 with Aglasem to get your dose of inspiration and grab some tips for CBSE 12th exam. 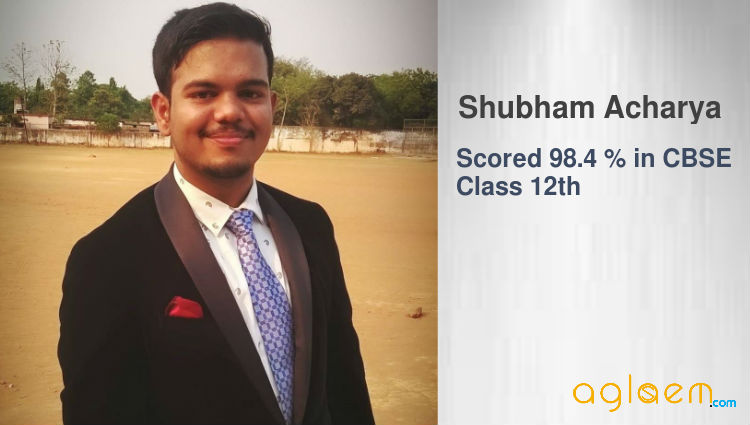 Update! Shubham Acharya got All India Rank 162 in JEE Advanced 2016

Shubham Acharya also got a great rank in JEE Advanced 2016 (AIR 162). On being asked about the new feather in his hat, he said this.

To tell you the truth I didn’t want to give JEE Advanced. Because by then I was sure I was going to IISc. Hard work always pays.  I will join IISc. I got admission in IISc on the basis of KVPY.

He is often asked why he has preferred to chose IISc over IIT. To that he says,

It would be easier for me to do something for the country, since our country lacks research potential. And I was always interested in Science, fell in love with the campus and the labs.

Shubham lives in Bhubaneshwar with his small family comprising his father, mother and a younger sister. His Father works at IMFA (Indian Metal & Ferro Alloys) and his mother is a homemaker. Shubham thanked his family for the support and assistance in studies and described

My family never pressurised me to study. I was given complete freedom to study as and when I wanted. This really helped me a lot. My sister was there whenever I felt too stressed as she always joked around with me. And my father and mother always took care never to disturb me while studying.

Talking more about his father, in whom he finds his inspiration, Shubham expressed

My father has been an inspiration to me. He has taught me about Spirituality from a very young age and has always asked me to do good for the nation and for ten other people and to teach them to do the same. He also taught me Bridge, which is one of the games in the World Mind Games (and which people mistakenly assumed as cards), and it helped my analytical skills a lot.

CBSE 12th Topper Shubham has a variety of hobbies that includes all sorts of sports and reading. He has read over 1000 books and can surely be called as an avid reader. He also likes video games and claims to have played all the popular ones. We asked him about his favourite subjects to which he promptly replied

I had been interested in Maths and Computers from an early age. I also fell in love with Chemistry in Class 11 and 12. As of now, I’d say Maths is my favourite and Chemistry my second favourite.

How you prepare defines how you perform. But having stringent plans of study does not work in all cases. Shubham says he studied without any predefined plan and became topper. Upon asking about the same, He explained

I didn’t have a set plan of study per se. I used to study till I felt I was absorbing what I was studying. If at any moment I felt I wasn’t absorbing anything, I would stop. The key here is not long hours, but efficient hours. Four hours of concentrated studies is better than eight hours of slogging. I made a list of all the topics of a particular exam on post-it notes and ticked them off one by one as I was completing them. I had a target to complete everything for a particular test one or two days before the test was conducted.

One may wonder how could that even be possible. To put some icing on the cake, Shubham also hasn’t attended any coaching or private tuition. He believes in self-study and shared his view on coaching, saying

I have never taken private tuitions. Coaching can be important without a doubt, but I feel that if students have all their doubts cleared in class, and can ask their doubts to teachers of their school who can clear them, then coaching isn’t required. Self-study is the best study for me.

CBSE 12th Topper Shubham used to study mostly from Arihant books, primarily using DC Pandey for Physics, 35 years question banks, and Skills in Mathematics Series. For his preparation of the Olympiads, he referred to books on the Olympiads by Arihant. He told us that he always found the New pattern books by Arihant very good.

Making it to the top, Shubham was accompanied by hard work and curiosity. The goal of doing something for the country has been motivating him since the beginning. When we asked him about his success mantra, he answered in one line, “Hard work always pays”.

On the day of Result

The day of Result is the hardest one for both the achievers as well as the ones who get disappointed. The news of Result spreads like fire and the phones get crazy ringing. On the day of CBSE 12th Result 2016, a ring at Shubham’s home chimed all the happiness for the family when they got to know about Shubham’s performance, that from his own teacher. Shubham shared the pleasant moment with us and recollected

I got a call from my computer teacher, Arbind Sir, that I had topped the school. My happiness knew no bounds. For a moment, I was speechless, and then I thanked God.

In the course of this interview, CBSE 12th Topper Shubham revealed his plans for his future. He wishes to be an entrepreneur and also wants to carry out research in various domains. He elaborated on his plan saying

I want to be self-employed. I also want to do good for the nation by developing a product for mass consumption. I want to improve the quality of air and water and tackle problems like Water Shortage, Inefficient use of Land and the like which plague India. I want to carry out research in a lot of scientific areas.

Likewise Shubham, We also believe that the hard work shall surely pay and may Shubham achieve whatever he wishes for the good of the country. All the best, Shubham!

This interview has been compiled by Aglasem correspondent Shivika Rastogi, and edited and published by Lalit Sharma.