Himanshu Sancheti (CGPA 10) reveals the reason behind his success

CBSE 10th Result 2016 saw a stupendous increase in the number of students scoring the perfect 10 CGPA. Among 1,68,541 students who got CGPA 10, there stands Himanshu Sancheti, a boy from Kishanganj in Bihar. In a small interview with Aglasem, Himanshu revealed the reason behind his success and his future plans. Read his inspiring story and know more about Himanshu. 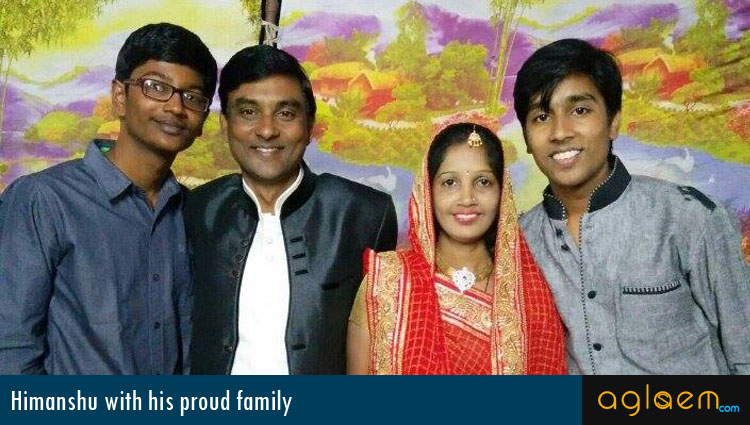 Himanshu comes from a nuclear family living in Kishanganj district of Bihar. He is the second son of Mr Arun Sancheti & Sarita Devi. Himanshu’s Father owns Cloth Shop in the town and his mother is a homemaker. He has an elder brother in whom he finds his ideal. Himanshu’s elder brother had been a topper in Class 10th as well as in Class 12th.

We asked him about the family support towards studies, to which he answered

My parents have never put pressure on me for studies and they have supported me a lot.

It may come as a surprise but this class 10th kid writes poems while most us used to defer even from our homework when we were in the tenth standard. He is also fond of Cricket. And, his favourite subject is Mathematics. Having said this, he has given academic as well as extracurricular goals to all the class 10th students.

Tips by Himanshu for scoring CGPA 10

Although CBSE 10th has switched to the grading system, which seems so-called ‘easier’, yet securing a CGPA (Cumulative Grade Point Average) of 10. After his success, he did not hesitate to share the preparation strategy tailored by himself. He went on to disclose the same, saying

I used to study 12 hrs during Exam holidays but in exam days, I only devoted 1 hr. I think each student needs to study 3 hours daily and I did the same but I think exam times we must take rest and not to pressurise our brain.
I think coaching is good in early days but is a disturbance during exam times.

Read daily and sleep only 6 hours at night.

For consistency and dedication, one needs a driving force. It can be a time table, a teacher or one himself. But for Himanshu, it was someone else. Himanshu’s elder brother played a key role in making it possible for him to score CGPA 10. Himanshu thanked his brother and credited his success to his brother, saying

My brother’s lectures always kept me motivated. He is the person behind my success.

Upon asking for any advice that he may want to give to other CBSE 10th students, he suggested a very simple and equally effective tip which is also his own Success mantra. He prescribed the CBSE 10th student, saying

I think each student must use the school books only leaving the guide books and reading the concept daily that had been taught in the classroom that day.

After the victory over CBSE 10th, Himanshu is not yet done. He dreams to pursue Master’s of Business Administration (MBA) from his dream college Sri Ram College of Commerce, Delhi. We wish him good luck and surely want to see him making this small victory to a large milestone. All the best, Himanshu!