All those chemical which are added to food to improve its keeping qualities, appearance, taste, odour are called the food additives.
1. Food Colours
2. Flavoures and Sweetners
3. Preservative
4. Nutritional Supplemets.

a. Saccharin:-
It is most popular arteficial sweetner. It is insoluble in water. It is 550 times sweeter than sugar. It is not biodegradable and does not have any calotific value of food.

b. Aspartame:-
It is methyl ester of dipeptide derived from phenylalanine and aspartic acid. It is 100 times sweeter than sugar. It decomposes at baking or cooking temperature thus it can be only used in cold foods and soft drinks.

c. Alitame:-
It is morestable than as partame. It is nearly 2000 times sweet as sugar. It is difficult to controle the sweetness of food which they are added.

Chemical substances which are used to protect food against Bacteria, Yeasts and Moulds are called preservatives.
Examples:-

ANTIOXIDENTS:-
Chemical which are used to prevent the oxidation of fats in processed foods such as potato chips are called.
Antioxidents:-
Ascorbic acid (Vitamin C) and tocopherols (Vitamin E) are used as Antioxidents.

Soaps and Detergents:-
Chemical substances which concentrates at the surface of the solution or interfaces, farms surface Films, reduced surface tension of solution helps in removing dirt and dust by emulsibying grease are called surfactants. They are soaps and detergents. 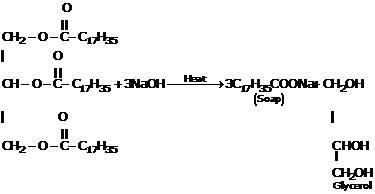 Only sodium and potassium soaps are soluble in water and are used for the
cleanising purpose.