Sol.   Number of moles of adenine must be equal to that of thymine

Therefore, no of moles of C + G

Number of moles of guanine =

Prob 2.  How will you synthesize alanine from acetylene?

Sol.  Amino acids exist as zwitter ions (I) in aqueous solution. In presence of acids (pH=2) basic COO– accepts a proton to give cation (II) but in presence of base (pH = 10), the acidic

donates a proton to the base and thus exists as anion (III). 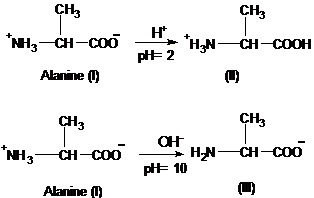 Prob 4.  Glycine exists as (H3N+CH2COO–) while anthranilic acid (P–NH2C6H4– COOH) does not exist as dipolar ions.

Sol.  – COOH is too weakly acidic to transfer H+ to the weakly basic – NH2 attached to the electron withdrawing benzene ring. When attached to an aliphatic carbon, the – NH2 is sufficiently basic to accept H+ from – COOH group