2. Real Sequence: A sequence whose range is a subset of R is called a real sequence.

5. Finite Series: A series having finite number of terms is called finite series.

6. Infinite Series: A series having infinite number of terms is called infinite series.

A sequence in which the difference of two consecutive terms is constant, is called Arithmetic Progression (AP).

(ii) nth Term of an AP If a is the first term, d is the common difference and / is the last term of an AP, then

(iii) If a constant is added or subtracted from each term of an AP, then the resulting sequence is an AP with same common difference.

(b) A sequence is an AP, iff the sum of n terms is of the form An2 + Bn, where A and B are constants. Common difference in such case will be 2A. 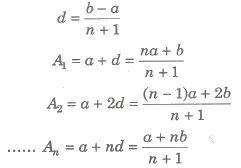 A sequence in which the ratio of two consecutive terms is constant is called GP. The constant ratio is called common ratio (r).
i.e., an+1/an = r, ∀ n ≥ 1

(ii) If all the terms of GP be multiplied or divided by same non-zero constant, then the resulting sequence is a GP with the same common ratio.

(iii) The reciprocal terms of a given GP form a GP.

(iv) If each term of a GP be raised to same power, the resulting sequence also forms a GP.

(v) If the terms of a GP are chosen at regular intervals, then the resulting sequence is also a GP. 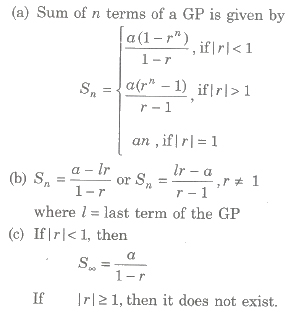 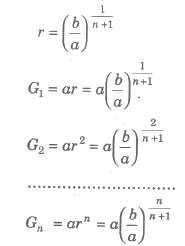 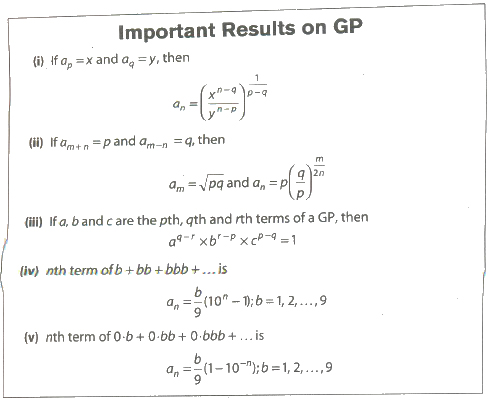 (b) nth term of the HP from the end

(d) an = 1/a+(n-1)d are the first term and common difference of the corresponding AP.
(ii) Sum of harmonic progression does not exist.

are n harmonic means between a and b where 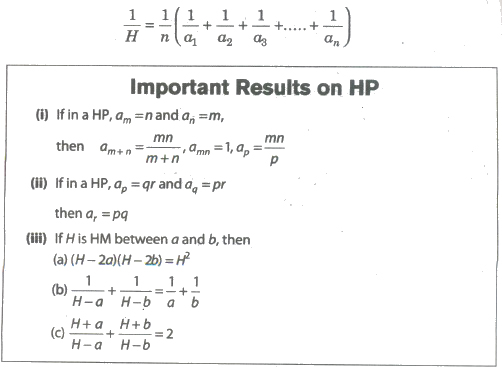 Properties of AM, GM and HM between Two Numbers 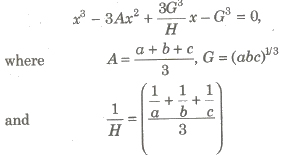 A sequence in which every term is a product of a term of AP and GP is known as arithmetico-geometric progression.

The series may be written as

Otherwise, in the similar way, we find series of higher order of differences and the nth term of the series.

The sum of the series is denoted by the 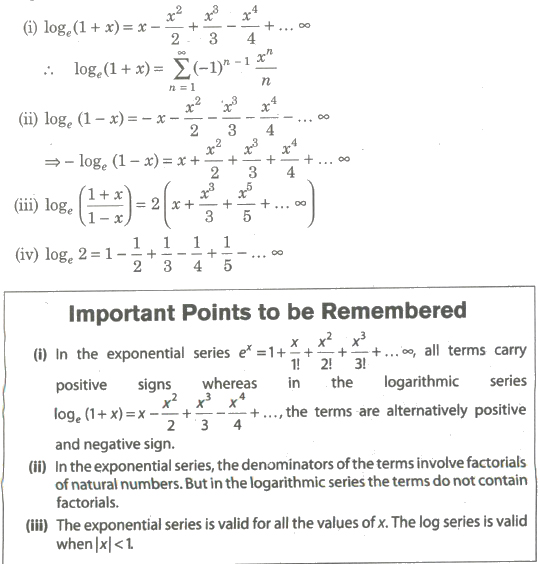 24. If number of terms in AP/GP/HP are odd, then AM/GM/HM of first and last term in middle term of progression.