Carbocation: A Carbocation (previously known as carbonium ion) is basically an ion with a positively charged C atom. The charged carbon atom in a Carbonium ion is a “sextet”, i.e. it has only six electrons in its outer shell or outermost energy level.

Stability:
Its stability can be determined with the help of Inductive effect, Hyper Conjugation and Resonance effect. 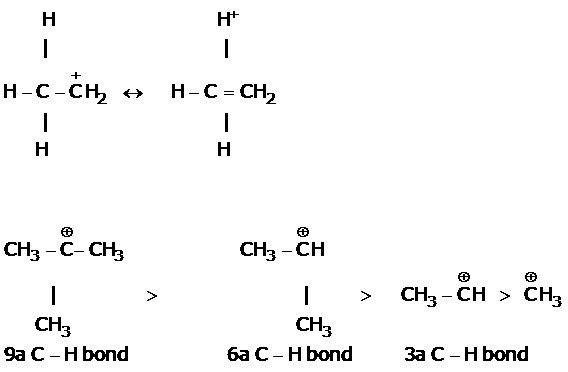 An allylic Carbocation is basically a resonance-stabilized carbonium ion which has the two resonance structures, in which the formal charge of +1 is on an allylic carbon.

Ex.1 Compare the stability of the following Carbocation:

Ex.2 Compare the stability of the following compounds

F being most electrons attracting group decreases the e- density from positively charged C-atom and decreases the charge density and makes the Carbocation less stable.

Ex.3 Compare the stability of the following Carbocation:

Sol. Due to greater size of Iodine, its lone pair will not be available for co-ordinate bond. Therefore lone pair would not stabilize Carbocation.

* By coordination the carbocation completes its octet and structure having complete octet of its atom is supposed to be most stable.

Note: In Resonating Structure of Ph3C+ at least one C gets sextet of e- and hence less stable than coordinated compound.

Ex.4 Compare the stabilities of the following Carbocation

Sol. N, O, F belongs to same period
In period Electro negativity of the atom is deciding factor
F being most electronegative holds its e- pair very firmly.
Its L.P. will not be easily available for coordination.
Stability by it will be minimum.
a > b > c

Ex.5 Compare the following Carbocation in order of their stability.

Sol. If periods of atoms which have to donate their electrons for coordination (for stability) is different then atomic size will be deciding factor. The atom whose size is greater will be unable to make it e- pair available for coordination.
b > a

Ex.6 Compare the stability of the following compounds