NCERT Class VIII English Chapter 3 Glimpses of the Past

NCERT Class VIII English Chapter 3 Glimpses of the Past

National Council of Educational Research and Training (NCERT) Book for Class VIII
Subject: English
Chapter: Chapter 3 – Glimpses of the Past

Class VIII NCERT English Text Book Chapter 3 Glimpses of the Past is given below.

Here are some pictorial glimpses of the history of our country from 1757 to 1857.  These pictures and ‘speech bubbles’ will help clarify your understanding of the  conditions that led to the event known as the First War of Independence in 1857. 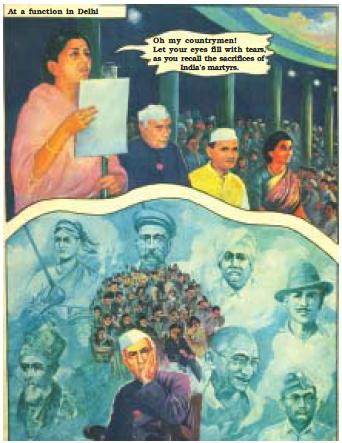 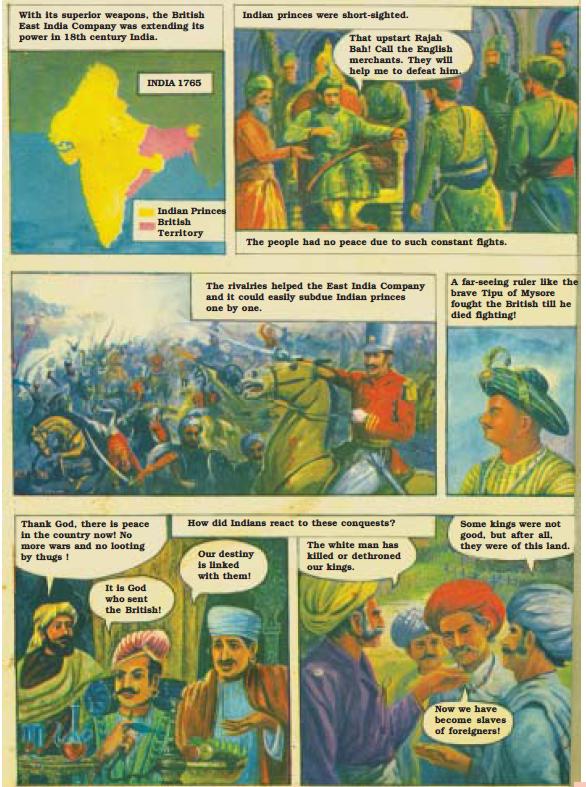 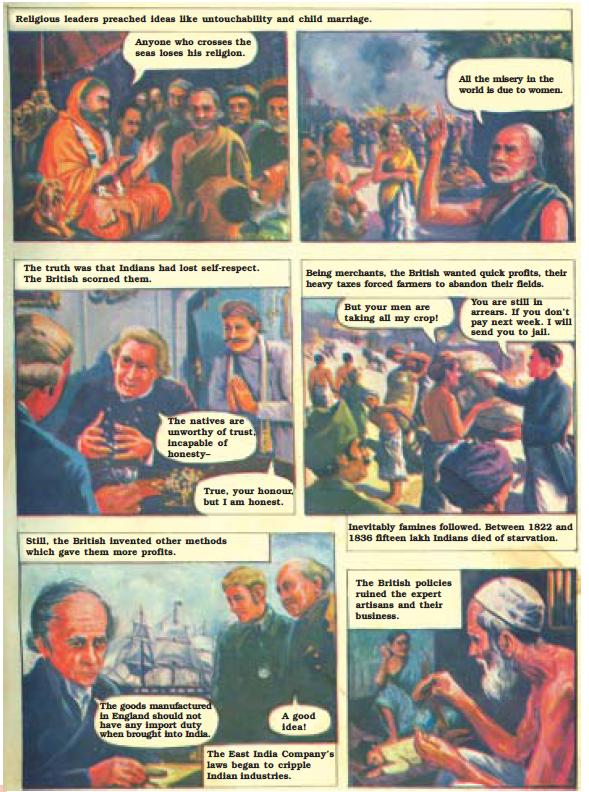 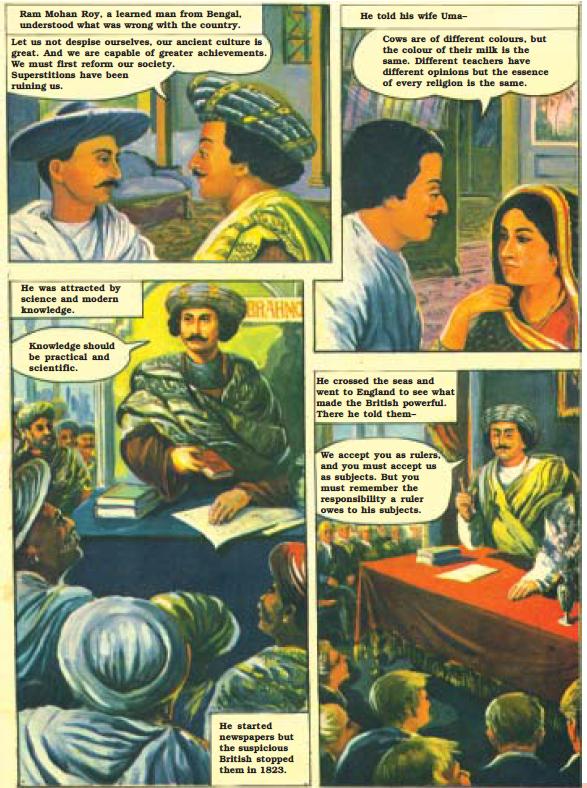 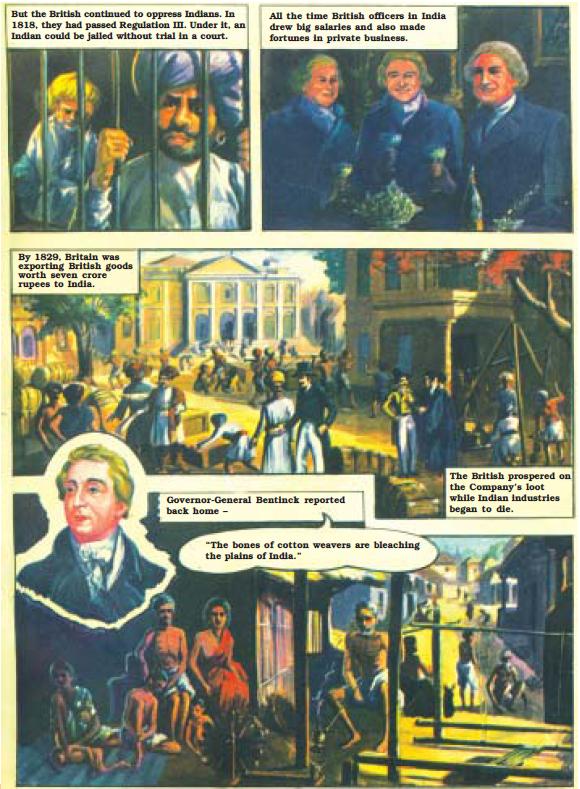 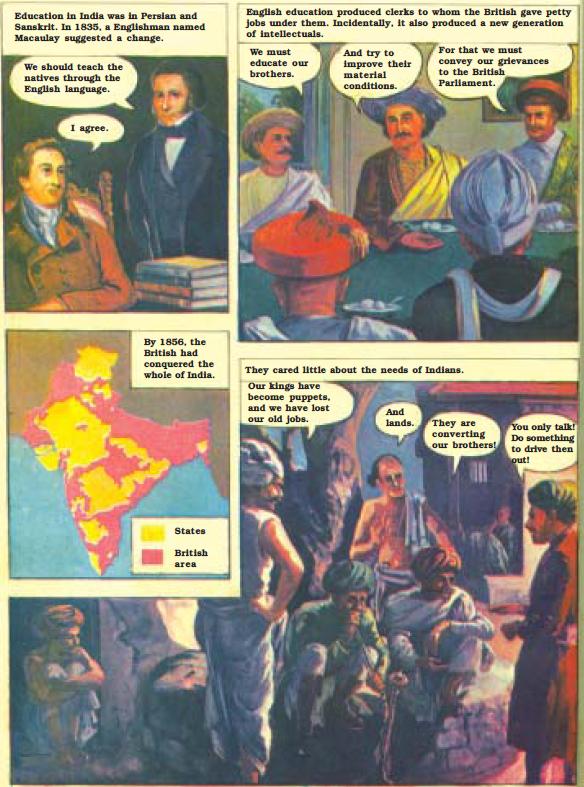 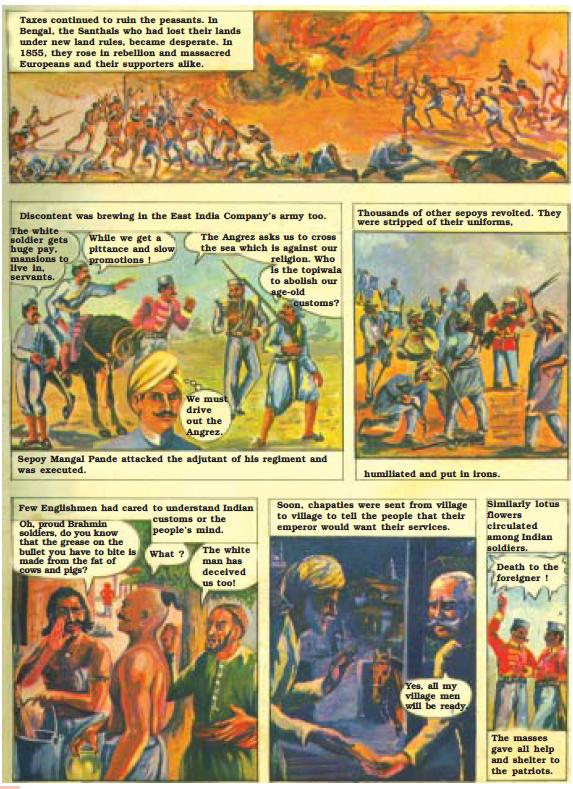 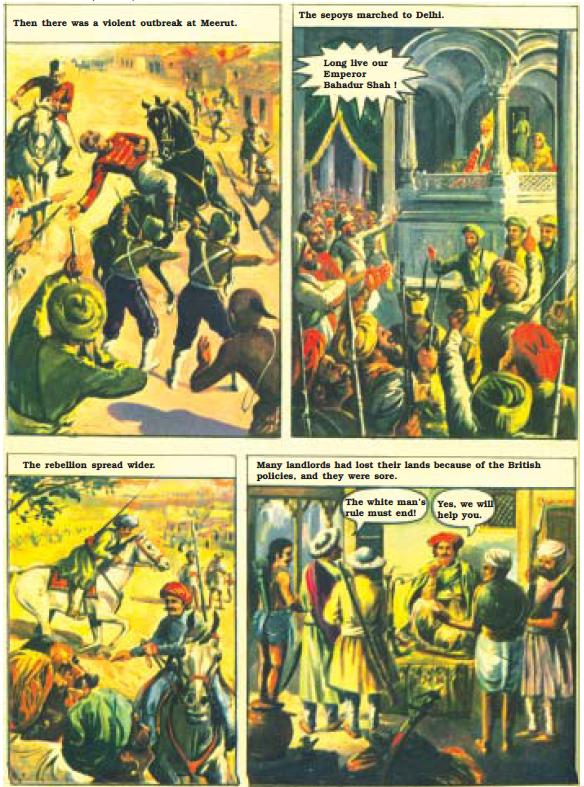 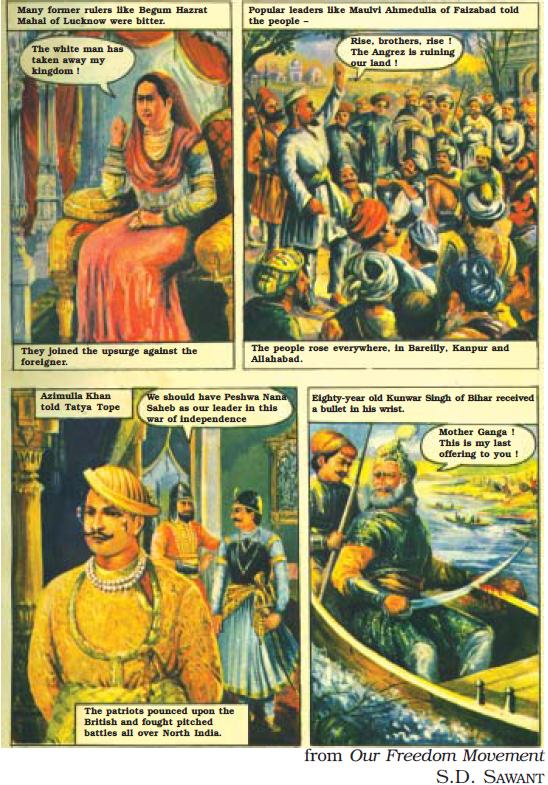 1. Look at picture 1 and recall the opening lines of the original song in Hindi. Who is the  singer? Who else do you see in this picture?

2. In picture 2 what do you understand by the Company’s “superior weapons”?

3. Who is an artisan? Why do you think the artisans suffered? (picture 3)

4. Which picture, according to you, reveals the first sparks of the fire of revolt?

1. Do you think the Indian princes were short-sighted in their approach to the events of 1757?

2. How did the East India Company subdue the Indian princes?

3. Quote the words used by Ram Mohan Roy to say that every religion teaches the same principles.

4. In what ways did the British officers exploit Indians?

(i) The ruler who fought pitched battles against the British and died fighting.

(ii) The person who wanted to reform the society.

(iii) The person who recommended the introduction of English education in India.

(i) Two examples of social practices prevailing then.

(iv) Four reasons for the discontent that led to the 1857 War of Independence.

Study these examples.
First farmer: Why are your men taking away the entire crop? Second farmer: Your men have taken away  everything. Officer: You are still in arrears. If you don’t pay tax next week, I’ll send you to jail.

(i) First man: We must educate our brothers.

Second man: And try to improve their material conditions.

Third man: For that we must convey our grievances to the British Parliament.

Second soldier: We get a pittance and slow promotions.

Third soldier: Who are the British to abolish our customs?

1. Playact the role of farmers who have grievances against the policies of the government. Rewrite their ‘speech bubbles’ in dialogue form first.

2. Look at the pictures. 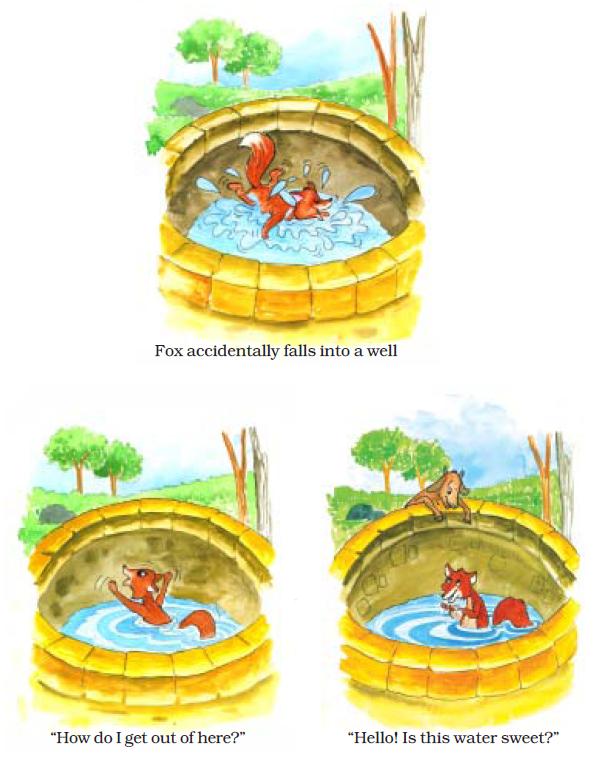 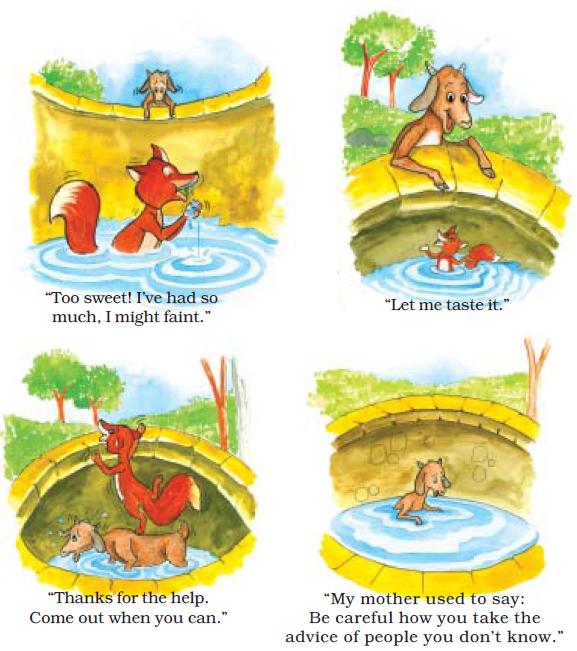 (i) Ask one another questions about the pictures.

History becomes fun at this school

Mumbai: Students in the sixth grade of a certain school in Navi Mumbai love their history lessons thanks to a  novel teaching aid. It is not surprising given the fact that their study material includes comic books and they use  their textbooks for reference to put things into perspective. Besides, students are encouraged to tap other  sources of information as well. During history classes, students pore over comic strips of historical periods,  enact characters of emperors and tyrants, and have animated discussions on the subject. History has become fun.

In the class students are asked to read the comic strip aloud, after which they break up into groups of four,  discuss what they have heard and write a summary. Each group leader reads his group’s summary aloud and the
whole class jumps into discussion and debate, adding points, disagreeing and qualifying points of view. A sixth  grade student says, “It’s a lot of fun because everyone gets a chance to express themselves and the summary takes everyone’s ideas into account.”

According to the school principal the comic strip format and visuals appeal to students. A historian feels that using comics in schools is a great idea. Comics and acting help students understand what characters in the story are actually thinking.

(adapted from The Times of India, New Delhi, October 2007)

Based on this news item, write a paragraph on what you think about this new method of teaching history.

4. Find the chapters in your history book that correspond to the episodes and events described in this comic.  Note how the information contained in a few chapters of history has been condensed to a few pages with the  help of pictures and ‘speech bubbles’.

5. Create a comic of your own using this story.

Once the Sun and the Wind began to quarrel, each one saying that he was stronger than the other. At last they  decided to test each other’s strength. A man with a cloak around his shoulders was passing by. The Wind boasted, “Using my strength I can make that man take off the cloak.” The Sun agreed. The Wind blew hard. The  man felt so cold that he clasped his cloak round his body as tightly as possible. Now it was the turn of the Sun  which shone very hot indeed. The man felt so hot that he at once removed the cloak from his body. Seeing the  man taking off the cloak, the Wind conceded defeat.

Do you have a pet cat? Have you ever noticed anything mysterious about it? It is not easy to say whether every  cat is a mystery, but Macavity is one, for sure. What is it that makes him a perfect mystery cat? Read the poem  and find out. Macavity’s a Mystery Cat: he’s called the Hidden Paw —

For he’s the master criminal who can defy the Law. He’s the bafflement of Scotland Yard, the Flying Squad’s despair:

For when they reach the scene of crime — Macavity’s not there! 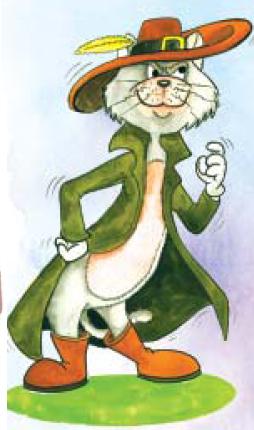 Macavity, Macavity, there’s no one like Macavity, He’s broken every human law, he breaks the law of gravity. His powers of  levitation would make a fakir stare,

You would know him if you saw him, for his eyes are sunken in. His  brow is deeply lined with thought, his head is highly domed;

His coat is dusty from neglect, his whiskers are uncombed. He  sways his head from side to side, with movements like a snake; And  when you think he’s half asleep, he’s always wide awake.

Macavity, Macavity, there’s no one like Macavity, For he’s a fiend  in feline shape, a monster of depravity. You may meet him in a by-street, you may see him in the square — But when a crime’s discovered, then Macavity’s not there!

defy: disobey or resist openly
Scotland Yard: the headquarters of the London police force
Flying Squad: a group of police or soldiers ready to move into action quickly
levitation: floating in the air without support
fiend: devil
feline: of, or relating to, a cat
depravity: moral corruption

1. Read the first stanza and think.

(i) Is Macavity a cat really?

3. “A cat, I am sure, could walk on a cloud without coming through”.
(Jules Verne)
Which law is Macavity breaking in the light of the comment above?

4. Read stanza 3, and then, describe Macavity in two or three sentences of your own.

5. Say ‘False’ or ‘True’ for each of the following statements.

(i) Macavity is not an ordinary cat.

(ii) Macavity cannot do what a fakir can easily do.

(v) Macavity is a spy, a trickster and a criminal, all rolled in one.

6. Having read the poem, try to guess whether the poet is fond of cats. If so, why does he call Macavity a fiend and monster?

7. Has the poet used exaggeration for special effect? Find a few examples of it and read those lines aloud.

Rick: Isn’t our child bright for his age!

Mary: Because if it was twelve inches long it would be a foot.

Anita: I got a hundred in school today.

Mother: That’s wonderful. What did you get a hundred in?

Anita: Forty in Maths and sixty in English.