by Anand Meena
in State Boards 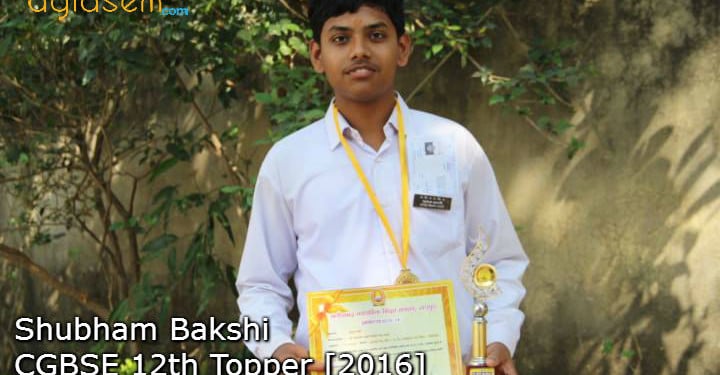 Shubham Bakshi, the Bilaspur boy, came out in flying colors when the Chattisgarh Board of Education announced the class 12th Results on 21 April. Shubham topped the 12th Board Exam with an aggerate of 97.60 percent scoring 488 marks out 500. In talks with Aglasem, Shubham revealed his success mantra and much more to learn for students.

Shubham Bakshi lives in the Bilaspur District of Chattisgarh, around 100 Km from the capital Raipur. His family has four members including his parents and one sibling. Post asking about his family support, Shubham said “They supported completely during the course of my studies. It’s really a proud moment for them”. He seemed very pleased sharing his success story with us. 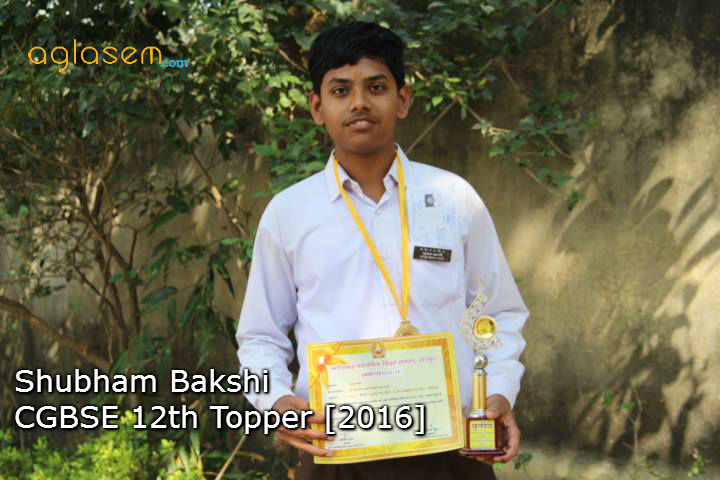 Shubham studied at the Saraswati S M H S School which is situated in Rajkishor Nagar, Bilaspur with Non-Medical stream. When asked about his favorite subject, he replied firmly in one word “Mathematics”.

The timid looking boy, Shubham, showed intense hard work and dedication for the studies. The support from the family and teachers helped him to conquerer all the odds. We asked him about his strategy and books he referred, to which he replied that he relied completely on the course books issued from the school. He also mentioned that he started the preparation for the 12th exams during the vacation period after the completion of 11th standard.

One should be hardworking with consistent aim and balance of subjects.
Shubham Bakshi

Now that he has topped the exam, it is proven that only thing matters is how well you study and not how much books you study.

Shubham looked very excited about the success in CGBSE 12th exam. He was overwhemled to say ” I’m very happy, I studied very hard for Board exams & I’m feelling excellent after seeing my result.” After acing the CGBSE, Shubham has surely became an inspiration for many students to learn from him.

“What next?” we asked him and he revealed his goal to get admission to IIT Bombay. “I have already appeared in JEE Mains and CG PET” he added. We believe his hard work will pay off and he will repeat the same story in JEE also.

When asked about his future plans, he said his aim is to join Microsoft, the international IT gaint. Well, sounds like a plan.

We wish all the good luck and best wishes to Shubham for his bright future and dreams.