ATSE 2022, Olympiad Registration Open.
Alcohols and Phenols Alcohols and phenols are formed when a hydrogen atom in hydrocarbon, aliphatic and aromatic respectively, is replaced by hydroxyl group (-OR group). Classification of Alcohols and Phenols In alcohols, -OR group is attached to Sp3 hybridised carbon. These alcohols are usually classified as primary, secondary and tertiary alcohols.

In allylic alcohols, – OH group is attached to sp3 hybridised carbon but next to C=C bond. e.g., CH2 = CH – CH2OH, Benzylic alcoho1(C6H5CH2OH) Structure of Alcohols and Phenols The oxygen atom of alcohols is Sp3 hybridised and they have tetrahedral position of hybrid atomic orbitals .

The value of LROH bond angle depends upon the R group. For methyl alcohol, it is (∠C – O – H) 108.9° due to repulsion of lone pairs. In phenols, the – OH group is attached to Sp2 hybridised carbon and thus, the C – O bond acquires a partial double bond character.

Nomenclature of Alcohols and Phenol In IUPAC, system, alcohol or alkanols are named by replacing the last word ‘e’ of the corresponding alkane by ‘ol’. e.g.,

Preparation of Alcohols (i) From alkenes (a) By acid catalysed hydration in accordance with Markownikoff’s rule.

Mechanism Step I Protonation of alkene by attack of H3O+

(ii) From carbonyl compounds (a) By reduction of aldehydes and ketones

Aldehydes yield primary alcohols whereas ketones give secondary alcohols, when subjected to reduction. (b) By reduction of carboxylic acids and ester

Methylamine does not give methyl alcohol when treated with HNO2. It gives CH3OCH3 and CH3ONO. (vii) By alcoholic fermentation

Preparation of Phenols (i) From haloarenes

Physical Properties of Alcohols 1. Lower alcohols are colourless liquids, members from C5 – C11 are oily liquids and higher members are waxy solids. 2. The hydroxyl groups in alcohols can form H-bonds with water, so alcohols are miscible with water. The solubility decreases with increase in molecular mass.

3. Boiling points of alkanes are higher than expected because of the presence of intermolecular hydrogen bonding in the polar molecules. [The boiling point decreases in the order 1° > 2° > 3° as the van der Waals’ forces of attraction decreases] Physical Properties of Phenols 1. These are colourless liquids or crystalline solids but become coloured due to slow oxidation with air. 2. Phenol is also called carbolic acid. 3. Because of the presence of polar -OH bond, phenols form intermolecular H-bonding with other phenol molecules and with water. Chemical Reactions of Alcohols and Phenols (i) Reactions involving cleavage of O – H Bond (a) Acidity of alcohols and phenols

Alcohols are weaker acids than water due to +1 group present in alcohols, which decreases the polarity of -O-H bond. Acid strength of alcohols

The reaction with R’COOH and (R’ CO)2O is reversible, so cone, H2SO4 is used to remove water. The reaction with R’ COCI is carried out in the presence of pyridine so as to neutralise HCI which is formed during the reaction. The introduction of acetyl (CH3CO-) group in phenols is known as acetylation. Acetylation of salicylic acid produces aspirin.

d) Dehydration of alcohols It requires acid catalyst and the reaction proceeds via intermediate carbonium ion. Acidic catalyst converts hydroxyl group into a good leaving group. Since, the rate determining step is the formation of carbocation, the ease of dehydration is 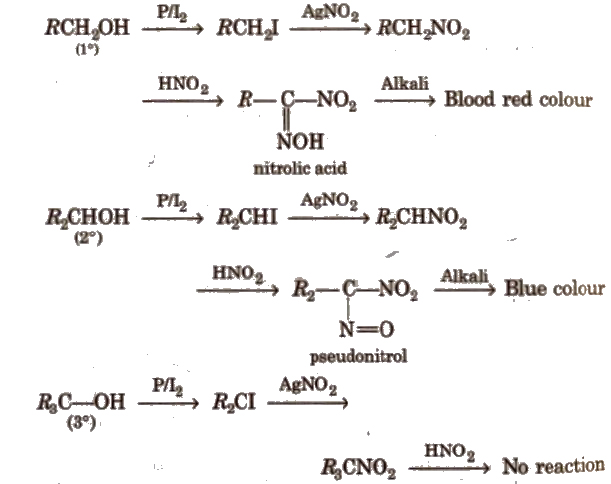 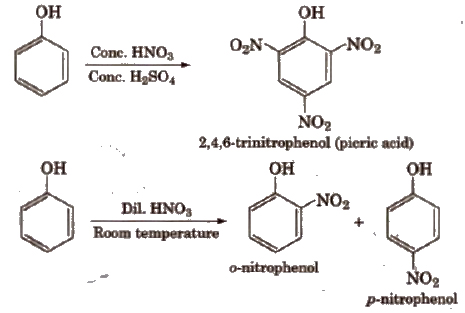 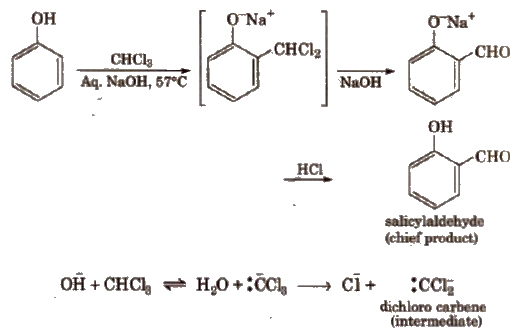 This reaction is an electrophilic substitution reaction and electrophile is dichlorocarbene. Similarly with carbon tetrachloride and alkali, c- and p-hydroxybenzoic acid are obtained 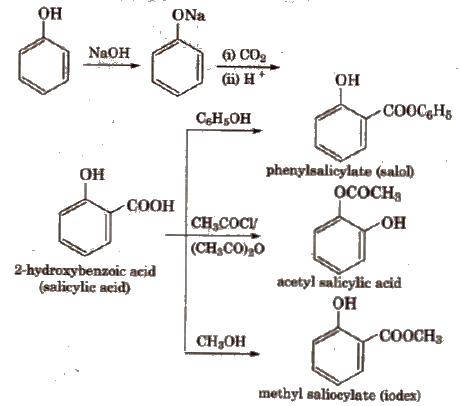 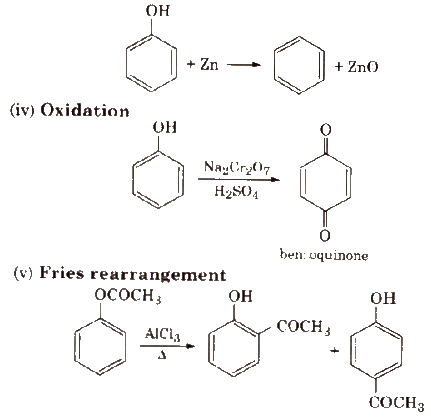 Terms Related to Alcohols (a) Rectified spirit It contains 95% ethyl alcohol and 45% water. It is an azeotrope (constant boiling mixture) and boils at 74°(. (b) Absolute alcohol Alcohol containing no water, i.e; 100% C2H5OH is known as absolute alcohol. It is prepared as follows. (i) Quick lime process (ii) Azeotropic method (c) Methylated spirit The rectified spirit rendered poisonous by addition of 4-5% methyl alcohol, traces of pyridine and some copper sulphate and is known as methylated spirit or denatured alcohol. (d) Power alcohol Alcohol mixed with petrol or fuel and used In internal combustion engines Is known as power alcohol. (e) Wood spirit Methyl alcohol (CH3OH) is also called wood spirit. It is obtained by destructive distillation of wood. Pyroligneous add, the product of destructive distillation of wood, contains acetic acid (10%), methyl alcohol (25%) and acetone (05%). Drinking of methanol causes blindness. (f) Grain alcohol Ethyl alcohol C2H5OH is also called grain alcohol. It is used In the preparation of various beverages containing different percentages. Dihydric Alcohols These are generally called glycols because of their sweet taste. Ethylene glycol (CH2OH – CH2OH) is the first and most important member of dihydric alcohol series. Methods of Preparation 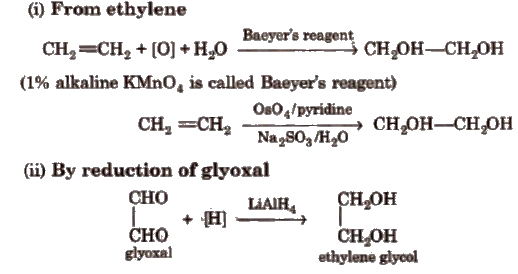 Physical Properties 1. It is a colourless, syrupy liquid with sweet taste. 2. Because of its tendency of formation of H-bonds, it is miscible with H2O and ethanol but not with ether. Chemical Properties It gives all the general reactions of -OH group. 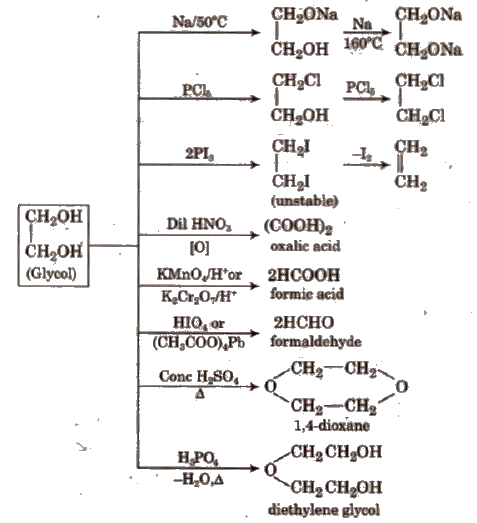 The per-iodic acid cleavage of 1,2-g1ycols is sometimes called Malaprade reaction. Trihydric Alcohols Glycerol or glycerine, CH2OH – CH(OH)- CH2OH is the first member of this group. Its IUPAC name is propane-l,2,3-triol. Method of Preparation It is obtained as a by product in saponification reaction.

Physical Properties 1. It is a colourless, odourless, viscous and hygroscopic liquid. 2. It is sweet in taste and steam volatile. 3. It is soluble in water but insoluble in ether. 4. Due to excessive H-bonding, it is highly viscous and has high boiling point. Chemical Properties It gives all the general reactions given by -OR group but 2° OR is less reactive as compared to 1° . Some of its specific reactions are : 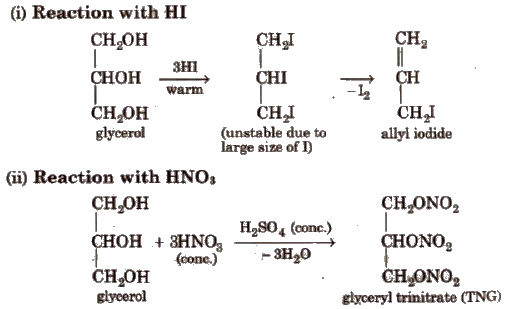 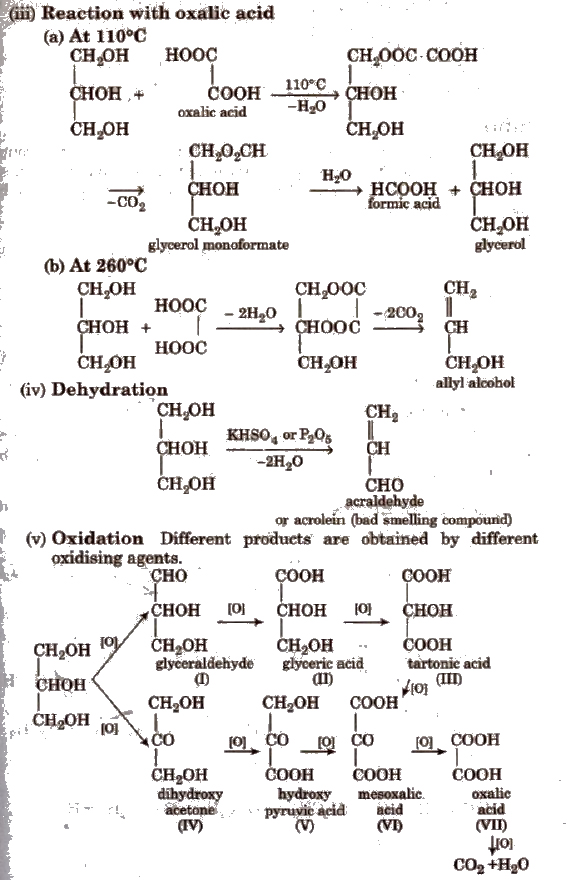 Cone HNO3 gives II; dil HNO3 gives II and III; Bi(NO3)3 or NaNO3 gives VI; Fenton’s reagent or NaOBr or Br2 water in Na2CO3 gives a mixture of I and IV. Solid KMnO4 oxidises glycerol to VII and CO2 and H2O. With HIO4 (periodic acid). glycerol gives HCOOH and HCHO. Ethers Ethers are the organic compounds in which two alkyl or aryl groups are attached to a divalent oxygen. known as ethereal oxygen. These are represented by the general formula R–O-R” where R may be alkyl or aryl groups. e.g.,

These are the functional isomers of alcohols. These also exhibit chain isomerism and metamerism. Nomenclature of Ethers In the IUPAC system, ethers are regarded as ‘alkoxy alkanes’ in which the ethereal oxygen is taken along with smaller alkyl group while the bigger alkyl group is regarded as a part of the alkane. Preparation of Ethers 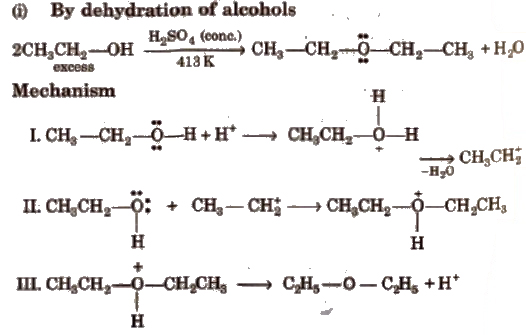 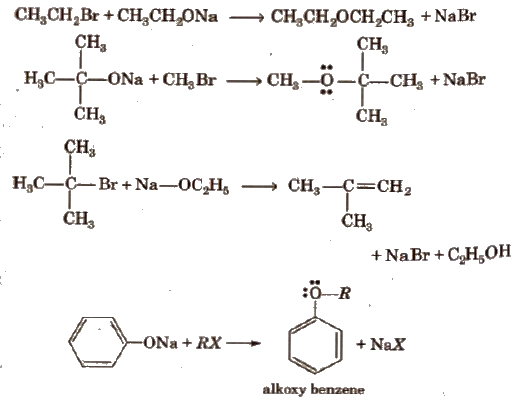 Physical Properties of Ethers Ethers are polar but insoluble inH20 and have low boiling point than alcohols of comparable molecular masses because ethers do not form hydrogen bonds with water. Structure of Ether The hybridisation of 0 atom in ethers is sp3 (tetrahedral) and its shape is V-shape.

Chemical Reactions of Ether (i) Reaction with HX

Ethers with two different alkyl groups are also cleaved in the same manner and results in the formation of a primary halide (or smaller and less complex alkyl halide) by SN2 mechanism. R-O-R’ + HX → RX + R’OR The order of reactivity of hydrogen halides is as follows HI > HBr > HCl In ethers if one of the alkyl groups is a tertiary group, the halide formed is a tertiary halide by SN1 mechanism. 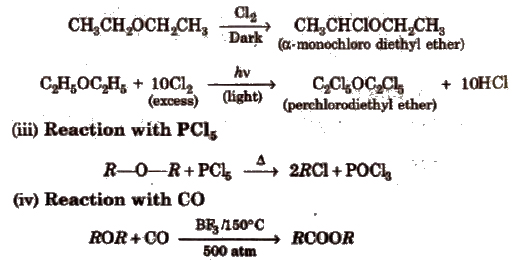 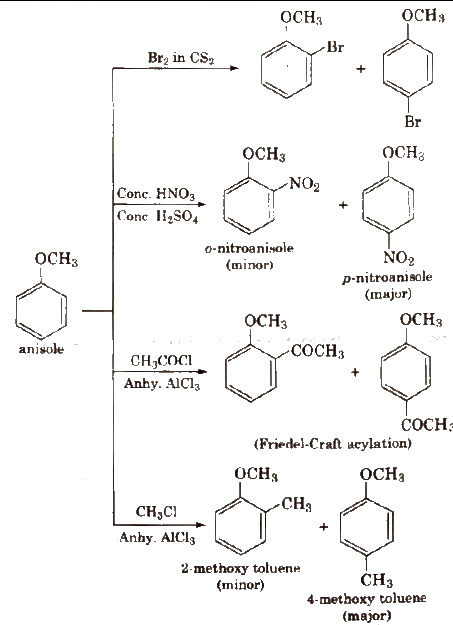 Ethyl phenyl ester C6H5OC2H5 is also, known as phenetole. Uses of Ethers 1. Dimethyl ether is used as refrigerant and as a solvent at low temperature. 2. Diethyl Ether is used as an anaesthesia in surgery .

Hope these notes helped you in your schools exam preparation. Candidates can also check out the Key Points, Important Questions & Practice Papers for various Subjects for Class 12 in both Hindi and English language form the link below.

Candidates who are studying in Class 12 can also check Class 12 NCERT Solutions from here. This will help the candidates to know the solutions for all subjects covered in Class 12th. Candidates can click on the subject wise link to get the same. Class 12 Chapter-wise, detailed solutions to the questions of the NCERT textbooks are provided with the objective of helping students compare their answers with the sample answers.

Mock test are the practice test or you can say the blue print of the main exam. Before appearing in the main examination, candidates must try mock test as it helps the students learn from their mistakes. With the help of Class 12 Mock Test / Practice, candidates can also get an idea about the pattern and marking scheme of that examination. For the sake of the candidates we are providing Class 12 Mock Test / Practice links below.