India is one of the ancient civilisations in the world. It has achieved multi-faceted socio- economic progress during the last five decades. It has moved forward displaying remarkable progress in the field of agriculture, industry, technology and overall economic development. India has also contributed significantly to the making of world history.

India is a vast country. Lying entirely in the Northern hemisphere (Figure 1.1) the main land extends between latitudes 8°4’N and 37°6’N and longitudes 68°7’E and 97°25’E. The Tropic of Cancer (23° 30’N) divides the country into almost two equal parts. To the southeast and southwest of the mainland, lie the Andaman and Nicobar islands and the Lakshadweep islands in Bay of Bengal and Arabian Sea respectively. 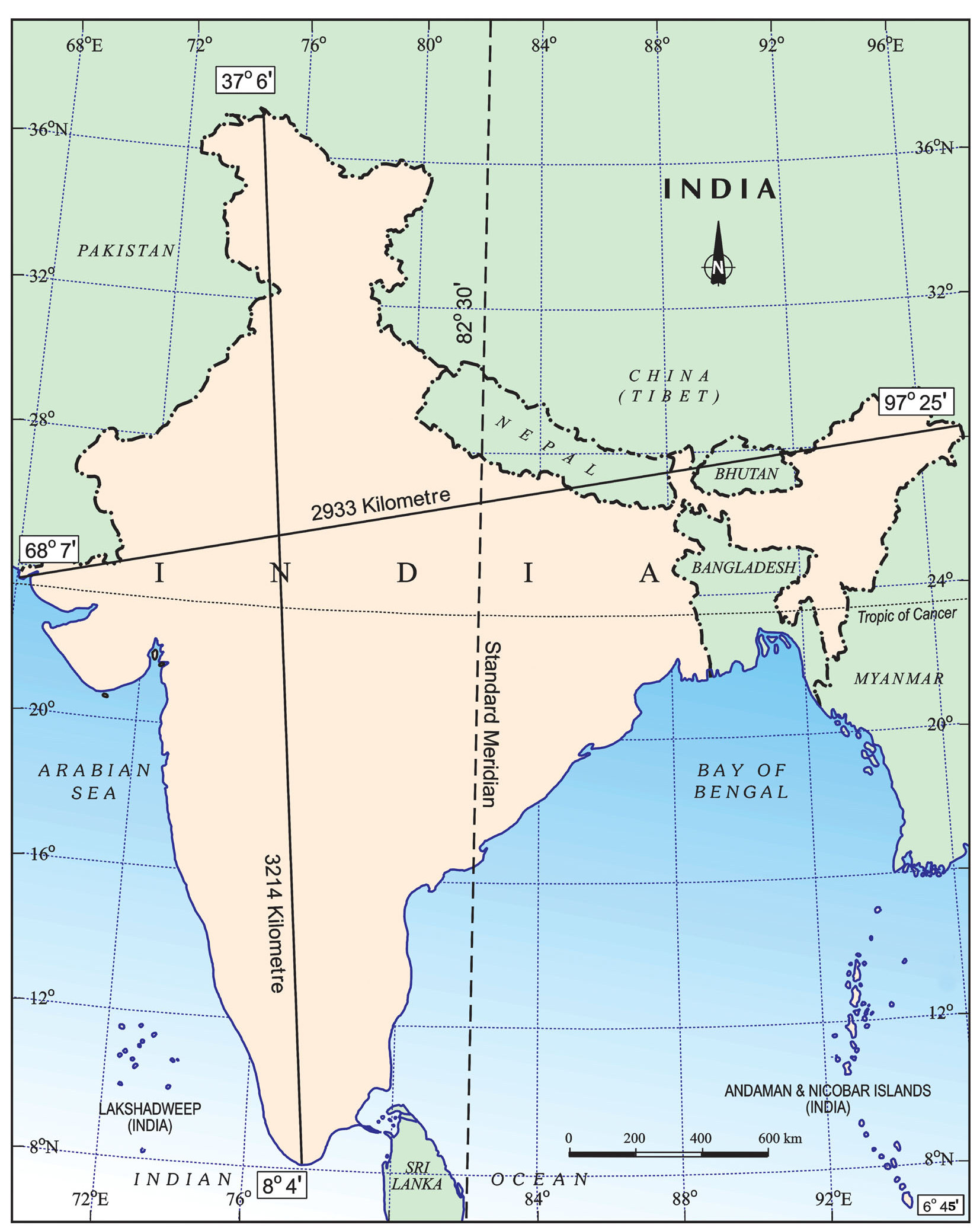 The land mass of India has an area of 3.28 million square km. India’s total area accounts for about 2.4 per cent of the total geographicalarea of the world.From the Figure 1.2 it is clear that India is the seventh largest country of the world. 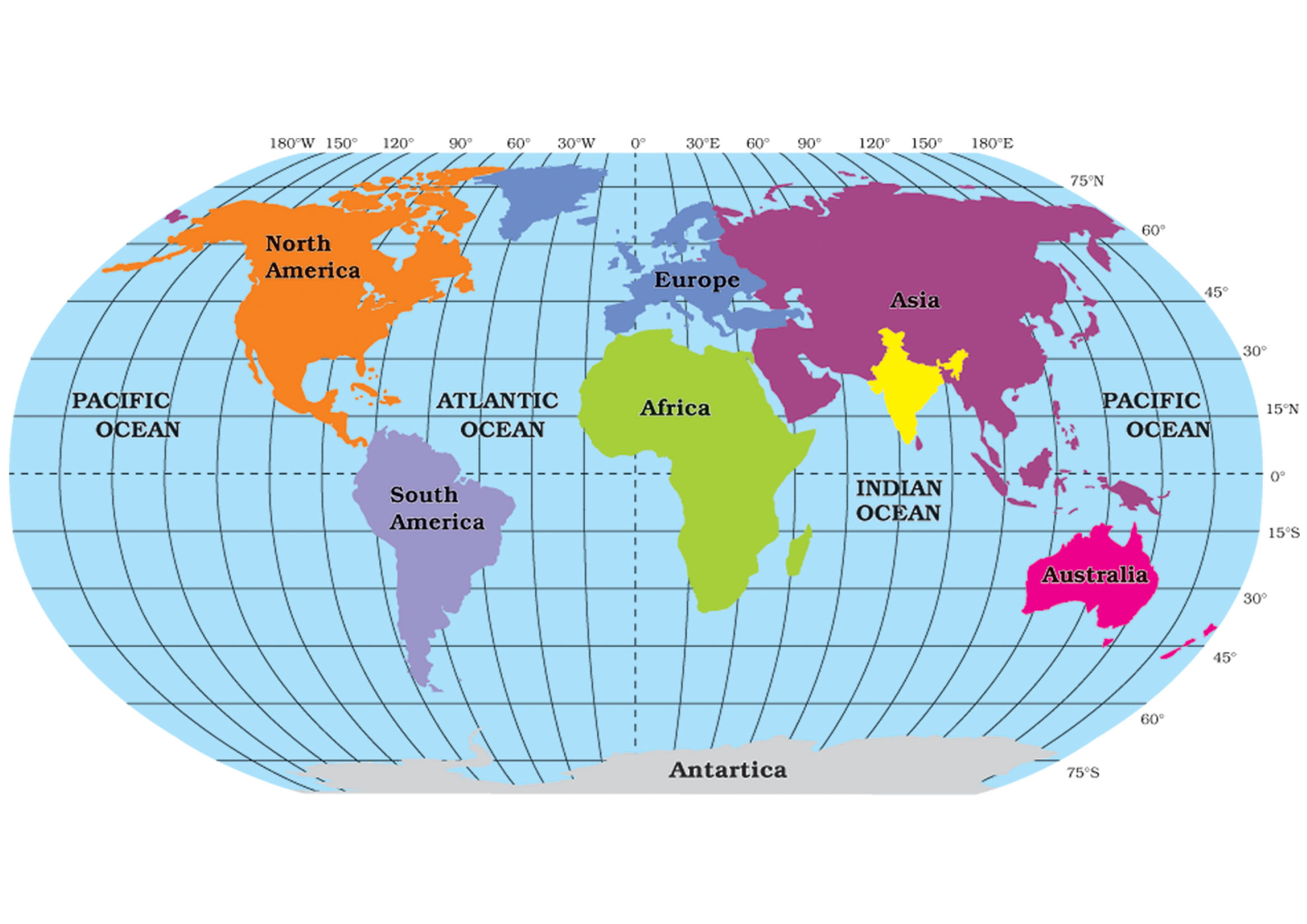 India has a land boundary of about 15,200 km and the total length of the coast line of the mainland including Andaman and Nicobar and Lakshadweep is 7,516.6 km. India is bounded by the young fold mountains in the northwest, north and north east. South of about 22° north latitude, it begins to taper, and extends towards the Indian Ocean, dividing it into two seas, the Arabian Sea on the west and the Bay of Bengal on its east. Look at Figure 1.3 and note that the latitudinal and longitudinal extent of the mainland is about 30°. Despite this fact the east-west extent appears to be smaller than the north-south extent. From Gujarat to Arunachal Pradesh there is a time lag of two hours. Hence, time along the Standard Meridian of India (82°30’E) passing through Mirzapur (in Uttar Pradesh) is taken as the standard time for the whole country. The latitudinal extent influences the duration of the day and night, as one moves from south to north. 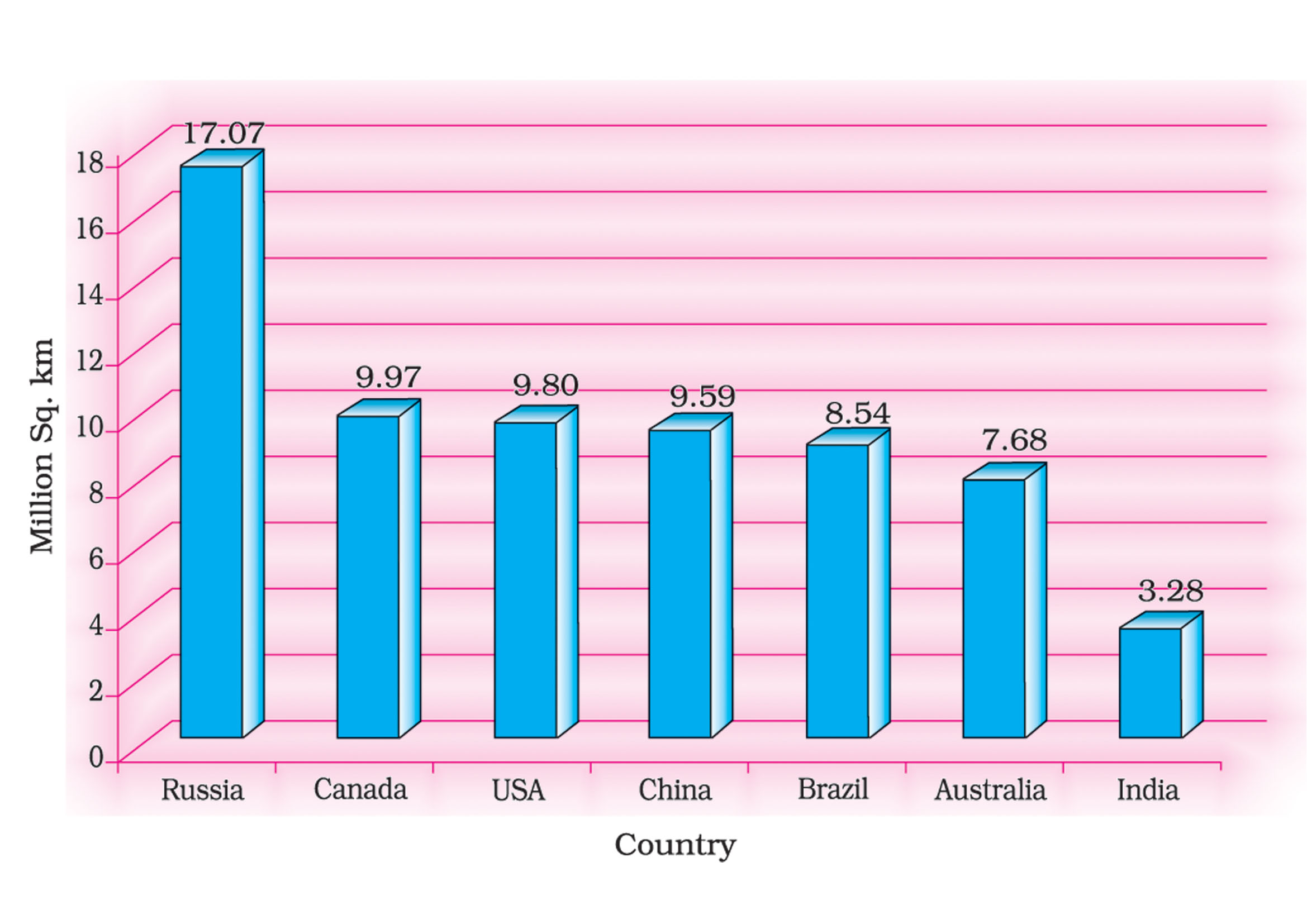 INDIA AND THE WORLD

The Indian landmass has a central location between the East and the West Asia. India is a southward extension of the Asian Continent. The trans Indian Ocean routes which connect the countries of Europe in the West and the countries of East Asia provide a strategic central location to India. Note that the Deccan Peninsula protrudes into the Indian Ocean, thus helping India to establish close contact with West Asia, Africa and Europe from the western coast and with Southeast and East Asia from the eastern coast. No other country has a long coastline on the Indian Ocean as India has and indeed, it is India’s eminent position in the Indian Ocean which justifies the naming of an Ocean after it. 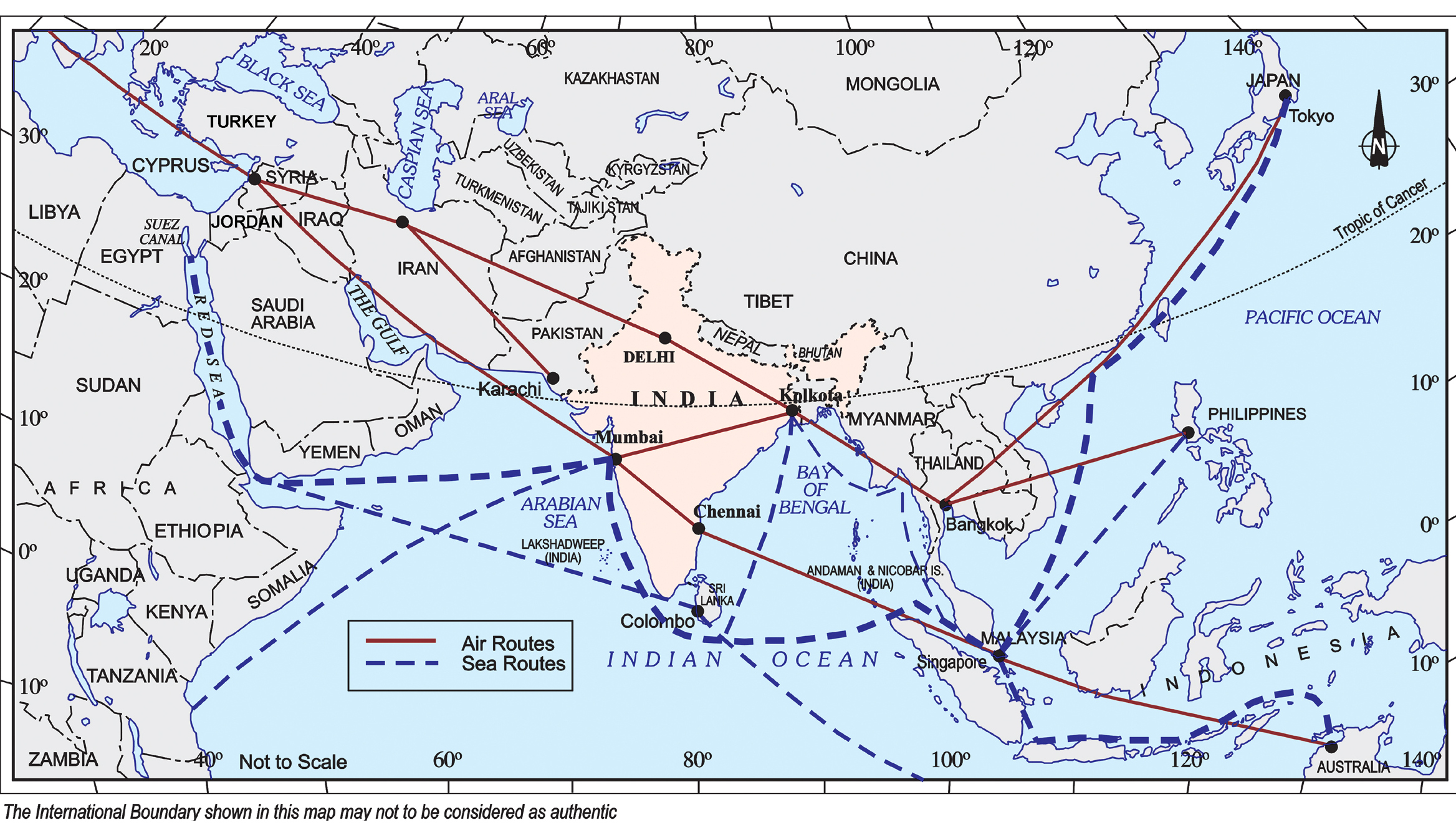 India’s contacts with the World have continued through the ages but her relationships through the land routes are much older than her maritime contacts. The various passes across the mountains in the north have provided passages to the ancient travellers, while the oceans restricted such interaction for a long time.

These routes have contributed in the exchange of ideas and commodities since ancient times. The ideas of the Upanishads and the Ramayana, the stories of Panchtantra, the Indian numerals and the decimal system thus could reach many parts of the world. The spices, muslin and other merchandise were taken from India to different countries. On the other hand, the influence of Greek sculpture, and the architectural styles of dome and minarets from West Asia can be seen in different parts of our country.

India occupies an important strategic position in South Asia. India has 28 states and 7 Union Territories (Figure 1.5). India shares its land boundaries with Pakistan and Afghanistan in the northwest, China (Tibet), Nepal and Bhutan in the north and Myanmar and Bangladesh in the east. Our southern neighbours across the sea consist of the two island countries, namely.

Sri Lanka and Maldives. Sri Lanka is separated from India by a narrow channel of sea formed by the Palk Strait and the Gulf of Mannar while Maldives Islands are situated to the south of the Lakshadweep Islands. India has had strong geographical and historical links with her neighbours. Look at the physical map of Asia in your atlas, and note how India stands apart from the rest of Asia.