You must have observed your teacher recording the attendance of students in your class everyday, or recording marks obtained by you after every test or examination. Similarly, you must have also seen a cricket score board. Two score boards have been illustrated here : 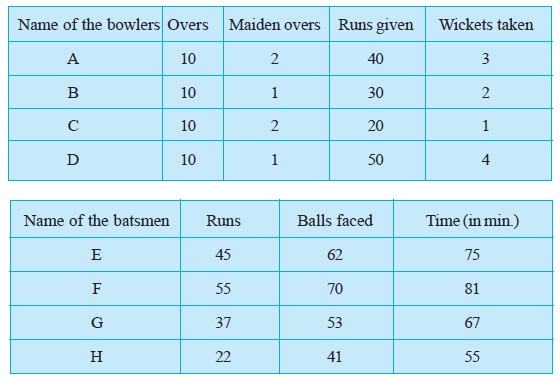 You know that in a game of cricket the information recorded is not simply about who won and who lost. In the score board, you will also find some equally important information about the game. For instance, you may find out the time taken and number of balls faced by the highest run-scorer.

Similarly, in your day to day life, you must have seen several kinds of tables consisting of numbers, figures, names etc.

These tables provide ‘Data’. A data is a collection of numbers gathered to give some information.

Let us take an example of a class which is preparing to go for a picnic. The teacher asked the students to give their choice of fruits out of banana, apple, orange or guava. Uma is asked to prepare the list. She prepared a list of all the children and wrote the choice of fruit against each name. This list would help the teacher to distribute fruits according to the choice. 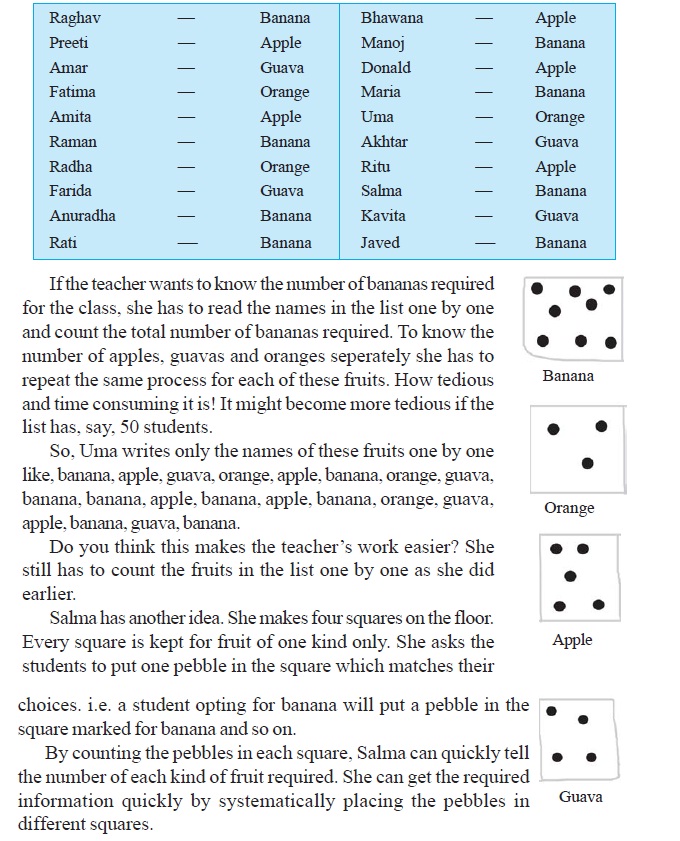 Try to perform this activity for 40 students and with names of any four fruits. Instead of pebbles you can also use bottle caps or some other token.

To get the same information which Salma got, Ronald needs only a pen and a paper. He does not need pebbles. He also does not ask students to come and place the pebbles. He prepares the following table.

you find this information? 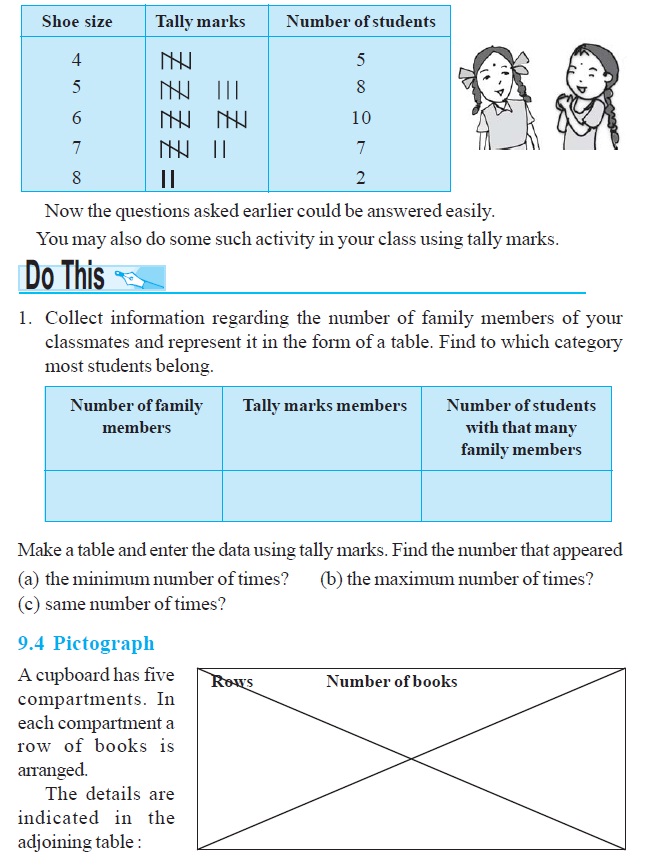 You can answer these questions by just studying the diagram. The picture visually helps you to understand the data. It is a pictograph.

A pictograph represents data through pictures of objects. It helps answer the questions on the data at a glance. 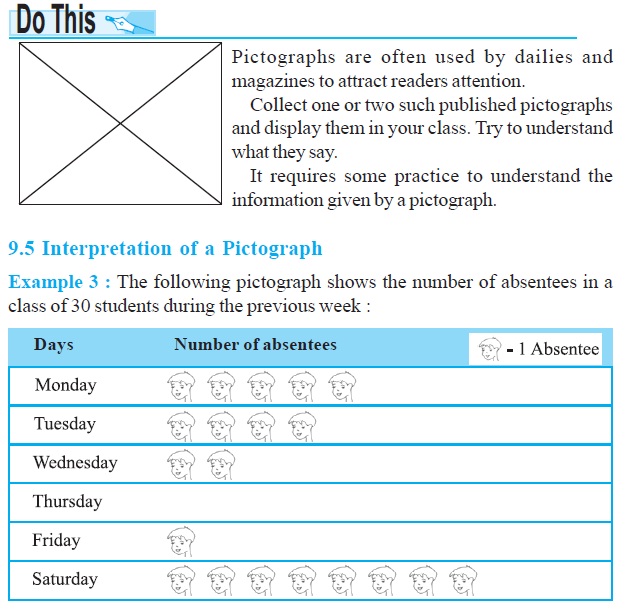 (a) On which day were the maximum number of students absent?

(b) Which day had full attendance?

(c) What was the total number of absentees in that week?

Solution : (a) Maximum absentees were on saturday. (There are 8 pictures in the row for saturday; on all other days, the number of pictures are less).

(b) Against thursday, there is no picture, i.e. no one is absent. Thus, on that day the class had full attendance.

(c) There are 20 pictures in all. So, the total number of absentees in that week was 20.

Example 4 : The colours of fridges preferred by people living in a locality are shown by the following pictograph : 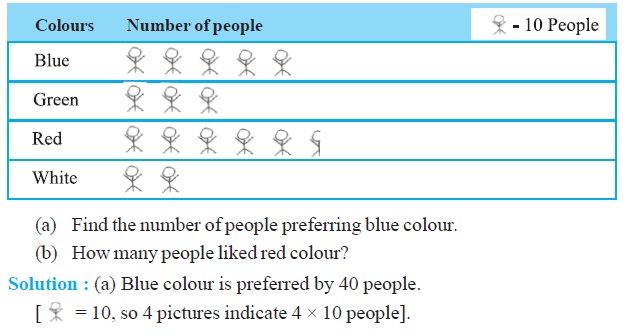 For the last incomplete picture, we may roughly take it as 5.

So, number of people preferring red colour is nearly 55.

In the above example, the number of people who like Red colour was taken as 50 + 5. If your friend wishes to take it as 50 + 8, is it acceptable?

Example 5 : A survey was carried out on 30 students of class VI in a school. Data about the different modes of transport used by them to travel to school was displayed as pictograph

What can you conclude from the pictograph?

Solution : From the pictograph we find that:

(a) The number of students coming by private car is 4.

(b) Maximum number of students use the school bus. This is the most popular way.

(c) Cycle is used by only three students.

(d) The number of students using the other modes can be similarly found.

Example 6 : Following is the pictograph of the number of wrist watches manufactured by a factory in a particular week.

(a) On which day were the least number of wrist watches manufactured?

(b) On which day were the maximum number of wrist watches manufactured?

(c) Find out the approximate number of wrist watches manufactured in the particular week?

We can complete the following table and find the answers.

1. In a Mathematics test, the following marks were obtained by 40 students. Arrange these marks in a table using tally marks.

(a) Find how many students obtained marks equal to or more than 7.

(b) How many students obtained marks below 4?

2. Following is the choice of sweets of 30 students of Class VI.

(a) Arrange the names of sweets in a table using tally marks.

(b) Which sweet is preferred by most of the students?

3. Catherine threw a dice 40 times and noted the number appearing each time as shown below :

Make a table and enter the data using tally marks. Find the number that appeared.

(c) Find those numbers that appear an equal number of times.

4. Following pictograph shows the number of tractors in five villages.

Observe the pictograph and answer the following questions.

(i) Which village has the minimum number of tractors?

(ii) Which village has the maximum number of tractors?

(iii) How many more tractors village C has as compared to village B.

(iv) What is the total number of tractors in all the five villages?

5. The number of girl students in each class of a co-educational middle school is depicted by the pictograph :

Observe this pictograph and answer the following questions :

(a) Which class has the minimum number of girl students?

(c) How many girls are there in Class VII?

6. The sale of electric bulbs on different days of a week is shown below : 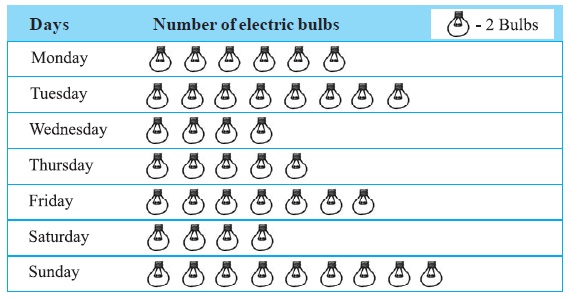 What can we conclude from the said pictograph?

7. In a village six fruit merchants sold the following number of fruit baskets in a particular season :

Observe this pictograph and answer the following questions :

(a) Which merchant sold the maximum number of baskets?

(b) How many fruit baskets were sold by Anwar?

(c) The merchants who have sold 600 or more number of baskets are planning to buy a godown for the next season. Can you name them? 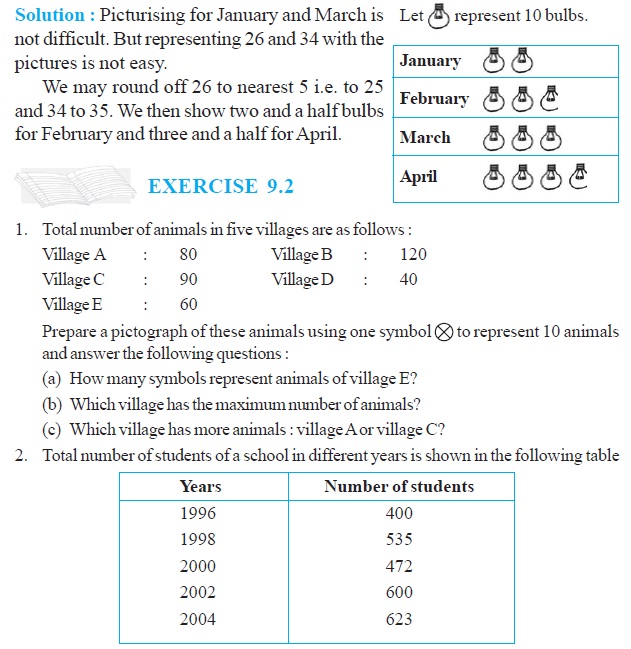 A. Prepare a pictograph of students using one symbol to represent 100 students and answer the following questions:

(a) How many symbols represent total number of students in the year 2002?

(b) How many symbols represent total number of students for the year 1998? B. Prepare another pictograph of students using any other symbol each representing 50 students. Which pictograph do you find more informative?

Representing data by pictograph is not only time consuming but at times difficult too. Let us see some other way of representing data visually. Bars of uniform width can be drawn horizontally or vertically with equal spacing between them and then the length of each bar represents the given number. Such method of representing data is called a bar diagram or a bar graph.

9.7.1 Interpretation of a bar graph

Let us look at the example of vehicular traffic at a busy road crossing in Delhi, which was studied by the traffic police on a particular day. The number of vehicles passing through the crossing every hour from 6 a.m. to 12.00 noon is shown in the bar graph. One unit of length stands for 100 vehicles.

(d) State the name of the subjects and marks obtained in each of them.

Recall the example where Ronald (section 9.3) had prepared a table representing choice of fruits made by his classmates. Let us draw a bar graph for this data. 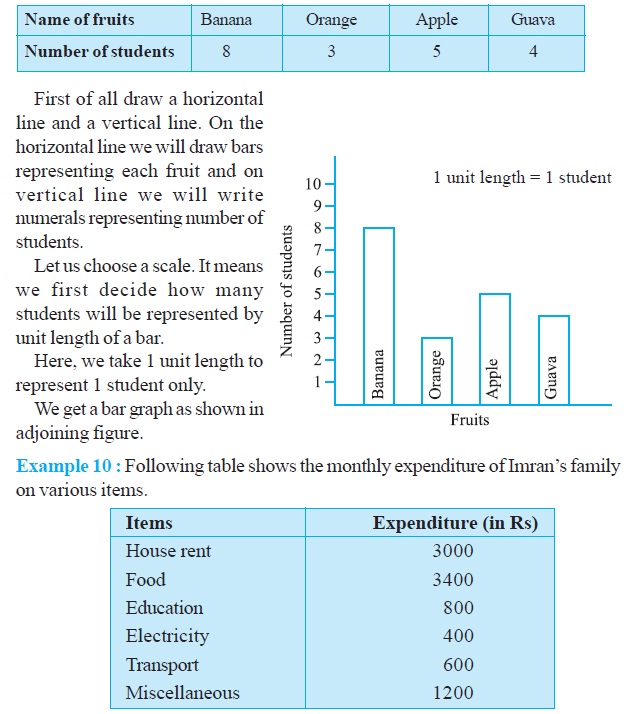 To represent this data in the form of a bar diagram, here are the steps.

(a) Draw two perpendicular lines, one vertical and one horizontal.

Calculate the heights of the bars for various items as shown below.

1. We have seen that data is a collection of numbers gathered to give some information.

2. To get a particular information from the given data quickly, the data can be arranged in a tabular form using tally marks.

3. We learnt how a pictograph represents data in the form of pictures, objects or parts of objects. We have also seen how to interpret a pictograph and answer the related questions. We have drawn pictographs using symbols to represent a certain number of items or things. For example, = 100 books.

4. We have discussed how to represent data by using a bar diagram or a bar graph. In a bar graph, bars of uniform width are drawn horizontally or vertically with equal spacing between them. The length of each bar gives the required information.

5. To do this we also discussed the process of choosing a scale for the graph. For example, 1 unit = 100 students. We have also practised reading a given bar graph. We have seen how interpretations from the same can be made.