CBSE Solved Sample Papers for Class 8 for Social Science Subject (Term 2)  is given below. The solved sample papers are created as per the latest CBSE syllabus and curriculum keeping in mind the latest marking scheme.

Q 1 In most parts of the western world modern cities emerged with:

Q 2 In many parts of the country people believed that if a woman was educated:

Q 4 Delhi has been a capital for more than:

Q 5 The need for an all India organization of educated Indians had been felt since:

Q 7 One popular imperial tradition was that of:

Q 9 A second feature of the constitution was that it guaranteed:

Q 10 The reformer which suggested that widows could remarry was:

Q 11  Two hundred years ago both Hindu and Muslim could:

Q 12 Delhi during the later Mughal period was also an important enter of:

Q 13 Indian textile had long been renewed both their:

Q 14 The Hindu College was established in Banaras in:

Q 15 The vernacular act allowed the government to confiscate the assets of newspapers including their printing presser if the newspaper published anything that was found:

Q 16 A third category of imperial art was called:

Ans The word ‘bandanna’ refers to brightly coloured and printed scarf which is used for the heck or hand. The term is derived from the word “bandana” (typing) and is used for variety of brightly coloured cloth produced through a method of typing and dying. These were mostly produced in Rajasthan and Gujarat.

Q 18 Which industry is often referred to as the backbone of modern industry and why?

Ans The industry which is referred to as backbone of modern industry is the iron and steel industry because it provider iron and steel for manufacturing tool and machines for various other industries.

Q 19 What is used in organic farming?

Ans In organic farming is farming in natural way organic manner and natural pesticide are used instead of chemical. No genetic modification is used to increase yield of the crop.

Q 20 Mention the name of posts who play generally key roles in the criminal care;

Q 21 Give some examples of agro based industries.

Ans Explain of agro based industries are:

Q 22 What was the demands of the Indian social conference formed under MahadevGovindRanade in 1887?

Ans The Indian social conference was formed by MahadevGovindRanadein 1887. Its demands were as under:

Q 23 Where does nomadic herding is practiced?

Ans In the semiarid and arid regions of Sahara, central Asia and some parts of India.

Q 24 What has been done legally to safe ground the marginalized groups by the government?

Ans Laws are made to protect its citizens. There are specific laws and policies for the marginalized sections. The government promotes policies in order to give opportunities to marginalized groups.

Q 25 What is meant by subsistence agriculture?

Ans In many cases a farmers a former’s own family consumes almost everything that he produce on the farm leaning very little of it for marketing. This is called subsistence agriculture.

Q 26 Explain the favorable factors for the location of steel planet at Jamshedpur.

Ans Iron and steel industry is located at Jamshedpur (Jharkhand) due to the following factors:

Q 27 What is plantation agriculture?

Ans plantation agriculture; it is a type of commercial farming where single crop of sugarcane, tea, coffee, rubber, banana etc. Are given large amount of labor and capital are required in this type of farming.

Q 28 Make clears the geographical position of cosomandel coast and its importance due to cotton textile.

Ans Second cluster of cotton weaving center of India was along the cosomandel coast stretching from madras to northern Andhra Pradesh.

Q 29 What is meant by cottage industry?

Ans Many goods carving of wood like making of come furniture weaving of cloth handloom, etc. are produced in small units mostly in houses with the help of family. There are called cottage industries

Q 30 How cultural and educational rights are important for minorities group? Explain briefly?

(b)   The constitution trier to ensure cultural justice to such groups. They can open their own institutions.

Q 31 Discuss the distribution of cotton textile and sugar industry in India.

Q 32 What important decisions, declaration and steps were taken by the English government in India after Macaulay’s minute?

(i)                  Following Macaulay’s minute the English education act of 1835 was introduced. The decision was to make English the medium of instruction for higher education in India.

Ans Population growth: population refers to the natural increase in the population plus any net gain from migration.

Ans The unfavorable sex ratio is due to many factors:

Q 35 On the outline map of the world marks the countries where wheat is produced? 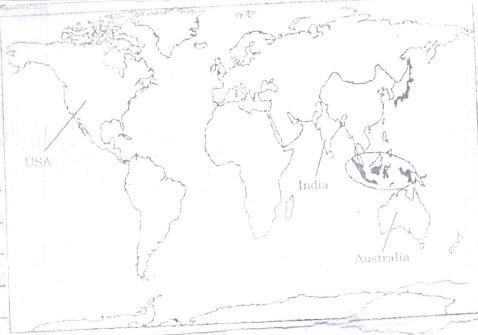 Q 36 On the outline of India marks the following: 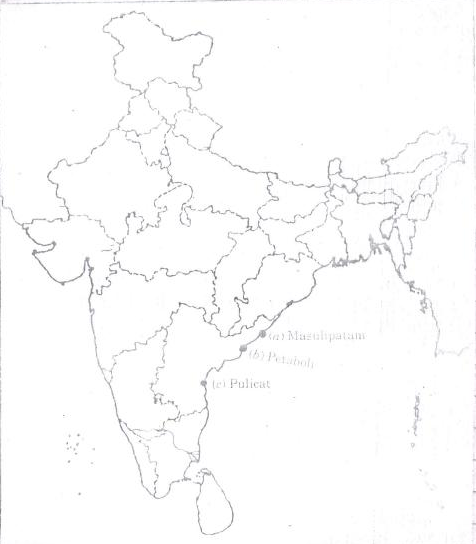