Tamil Nadu Board of Higher Secondary Education Sample Paper / Model Paper for Class 12 Economics is given below.

I. Choose the best answer :-

5. The concept of equilibrium is always explained with reference to
a) price
b) supply
c) demand
d) time

8. Monopoly exists when there is
a) a single producer
b) a single buyer
c) a few producers
d) many producers

9. Rent is the price paid for the use of
a) capital
b) organization
c) labour
d) land

11. Monetary policy is implemented by
a) Central Government
b) Central and State Governments
c) Central Bank of the country
d) Private enterprises

13. The relationship between inputs and outputs is known as
a) Cost function
b) Production function
c) Profit function
d) Revenue function

14. Social cost is borne by
a) firm b) producer c) seller d) society

II. Fill in the blanks:-

25. The Marginal Productivity Theory of distribution is known as theory of ___________ pricing. 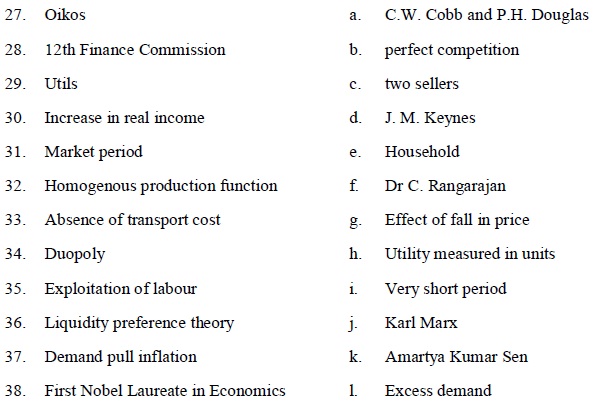 IV. Answer each one of the following questions in a word or two :-

39. Who gave the wealth definition of Economics?

40. What was the prize awarded to Amartya Kumar Sen for his outstanding contribution to economics?

41. What is the other name for Marshallian utility analysis?

42. Name the French Mathematician who first stated the Law of Demand.

43. Can the size of plant and technology employed be changed in the market period?

44. Is ‘Capital’ a man – made productive resource?

45. What is the price paid for the use of the power of land according to David Ricardo?

46. What is the difference between revenue receipts and revenue expenditure called?

48. What is the ratio of total consumption to total income called?

49. Who developed the Residual Claimant Theory?

ii) Answer for each question should be about four or five lines.

58. Distinguish between a firm and an industry.

63. What is micro economics?

64. What are the four factors of production?

65. What is Marginal Revenue Product?

ii) Answer for each question should be about a page.

66. Mention any three points of criticism of the Wealth Definition.

68. State briefly the Law of Supply with diagram.

70. Enlist the internal and external diseconomies of scale.

72. What are the features of monopolistic competition?

73. Explain the Innovations Theory of Profit.

74. What are the differences between direct taxes and indirect taxes?

i) Answer any THREE questions : 3 X 20 = 60
ii) Answer for each question should be about three pages.

76. Explain the merits and demerits of mixed economy.

77. Describe the law of dimimishing marginal utility with diagram.

78. Explain the different types of elasticity of demand with diagrams.

79. How are price and output determined under conditions of perfect competition in the short run and long run? Give suitable diagram.

80. How did J.M. Keynes criticise the Classical Theory of Employment and Output?