This form of writing is used to interpret the facts presented in the form of table, graph or chart. A graph or chart is a visual stimulus to depict the data. Data interpretation requires an analysis and comparison of the given facts and drawing conclusions based on the given data.

1-Study the chart given below, which is the result of the survey conducted in the public schools and government schools of Vadodara. This depicts the types of activities the teenagers (Age 13- 19 years are involved during their leisure time). Complete the summary in about 80 words.

Now a days the teenagers are more techno-savvy than the children used to be ten years back. They do not play games like Ludo, Carrom, Chess and other indoor games. 9-18 % of boys and girls in the age group of 13-19 years possess their own cell phones. In the survey conducted recently on some 2000 students of two leading schools- one government and the other a public school, the following facts were revealed. While the students from public schools spend more of their leisure time in net-surfing and talking on cell phones, the government school students spend it in watching TV and talking to their friends.

2- The following data in the form of histogram shows that death due to violence has increased considerably during recent years. Write its interpretation in 100 words on how educated youth can play a major role in establishing peace in society. 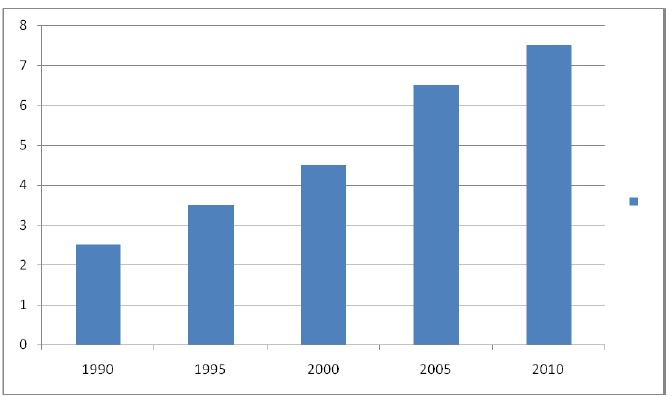 Role of youth in establishing peace in society

Youth and peace are interlinked in society. Youth can play an important role in establishing peace in society. In a survey conducted, it has been found that number of deaths due to violence has increased enormously since the nineties. Death rate in 1000s was 2.5 in 1990. But in 2010, it has increased to 7.5. It is really very sad. It must be checked.

Our youth can play a major role in controlling this crime graph. They can contribute towards establishing peace in many ways. They can awaken the people towards the necessity of peace. They can help the police in catching the criminals. They can bring the criminals in the main stream by educating them and they can do much more.

1- Study the graph given below, which is based on a survey done on students of tenth class in three different types of schools in Ahmedabad. The chart depicts the number of students speaking English and Hindi. On the basis of the details given in the bar-graph given below, briefly summarize the data making comparison wherever necessary in about 80 words.

Hint- Compare the percentage of students speaking English and Hindi in all three schools giving the possible reasons.

In a study conducted on the students of class tenth of three various types of schools- Government school, private school and a KV, it was observed that

2. As an aware citizen of the country, you are concerned about the increase in road accidents in the metropolitan city Delhi. Interpret the data given below in about 80 words. Also use your own ideas.

3-Give below is a pie-Chart, which shows different types of electric gadgets, used by middle-class people in their houses on an average in Ahmedabad. On the basis and the unit ‘Science’ of your Main course Book; write in about 80 words the reason of selecting the electric gadgets for their houses.