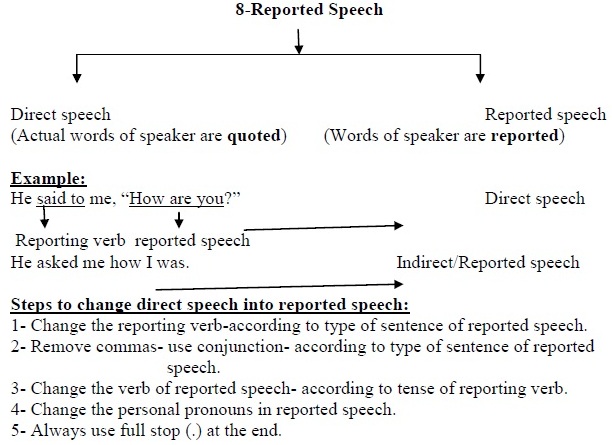 Changing the verb of reported speech

I person- with the speaker

II person- with the listener

The following passage has not been edited. There is one error in each line. Underline the error and write the incorrect word and the correction. The first one has been done as an example.

Unsolved exercises
The following newspaper report has not been edited. There is one error in each line. Underline the error and write the incorrect word and the correction.

Ultimately, Rohit , one of the residents of the

One thing we all must do /to cooperate    a- is

They warn us not /touch unidentified,   c- to

brief cases etc. we need/ watch out for    e-to

details/ such objects to the nearest police    g-of

1. Look at the words and phrases below. Rearrange them to form meaningful sentences. The first one has been done as an example.

a- It is cultivated in 96 countries around the world.
b- It was first grown in Africa about 5000 years ago.
c- Some researchers say that it was grown in India at the same time.
d- It was used by travellers when they travelled across a desert.

ANS: (a) They get all their water supply from the leaves they eat.
(a) So, in areas inhabited by Koalas demand of tree leaves is high.
(b) It takes several acres of trees to support one group of Koalas.
(c) Each adult Koala can eat one and a half kilograms of leaves every day.

2. Rearrange the following to form meaningfulsentences.

1. Read the conversation between Rama and Sita. Then report the paragraph that follows.

Rama: I am going to jungle.

Rama: I have been banished for fourteen years by father.

Rama: No. Stay at home to care of my old parents.

2. Read the comic strip given below and complete the paragraph

Read the conversation between Anita and Prakash. Then report the paragraph that follows.

Anita: What do want to do this morning?

Prakash: I feel like taking a walk. It‘s so nice outside.

Anita: Great, let‘s walk around the lake in the park.

Anita: Yes, watch your steps so you don‘t trip.