Every object in the universe attracts every other object with a force which is proportional to the product of their masses and inversely proportional to the square of the distance between them. The force is along the line joining the centers of two objects. 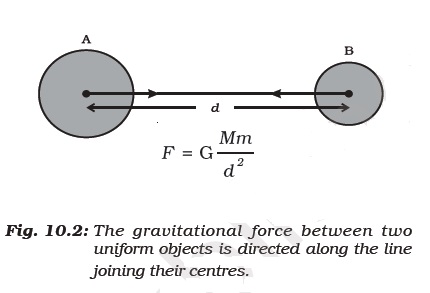 And the force between two objects is inversely proportional to the square of the distance between them, that is,

where G is the constant of proportionality and is called the universal gravitation constant. By multiplying crosswise, Eq. (10.4) gives

We know that there exists a force of attraction between any two objects. Compute the value of this force between you and your friend sitting closeby. Conclude how you do not experience this force!

10.1.2 IMPORTANCE OF THE UNIVERSAL LAW OF GRAVITATION

The universal law of gravitation successfully explained several phenomena which were believed to be unconnected:

where M is the mass of the earth, and d is the distance between the object and the earth.

The earth is not a perfect sphere. As the radius of the earth increases from the poles to the equator, the value of g becomes greater at the poles than at the equator. For most calculations, we can take g to be more or less constant on or near the earth. But for objects far from the earth, the acceleration due to gravitational force of earth is given by Eq.(10.7).

10.2.2 MOTION OF OBJECTS UNDER THE INFLUENCE OF GRAVITATIONAL FORCE OF THE EARTH

We know that an object experiences acceleration during free fall. From Eq. (10.9), this acceleration experienced by an object is independent of its mass. This means that all objects hollow or solid, big or small, should fall at the same rate. According to a story, Galileo dropped different objects from the top of the Leaning Tower of Pisa in Italy to prove the same.

As g is constant near the earth, all the equations for the uniformly accelerated motion of objects become valid with acceleration a replaced by g (see section 8.5).