Get here NCERT Solutions for Class 12 Biology Chapter 5. These NCERT Solutions for Class 12 of Biology subject includes detailed answers of all the questions in Chapter 5 – Principles of Inheritance and Variation provided in NCERT Book which is prescribed for class 12 in schools. Book: National Council of Educational Research and Training (NCERT) Class: 12th Class Subject: Biology Chapter: Chapter 5 – Principles of Inheritance and Variation

Class XII Biology Chapter 5 Principles of Inheritance and Variation NCERT Solution is given below.

Question 1: Mention the advantages of selecting pea plant for experiment by Mendel. Answer Mendel selected pea plants to carry out his study on the inheritance of characters from parents to offspring. He selected a pea plant because of the following features. (a) Peas have many visible contrasting characters such as tall/dwarf plants, round/wrinkled seeds, green/yellow pod, purple/white flowers, etc. (b) Peas have bisexual flowers and therefore undergo self pollination easily. Thus, pea plants produce offsprings with same traits generation after generation. (c) In pea plants, cross pollination can be easily achieved by emasculation in which the stamen of the flower is removed without affecting the pistil. (d) Pea plants have a short life span and produce many seeds in one generation. 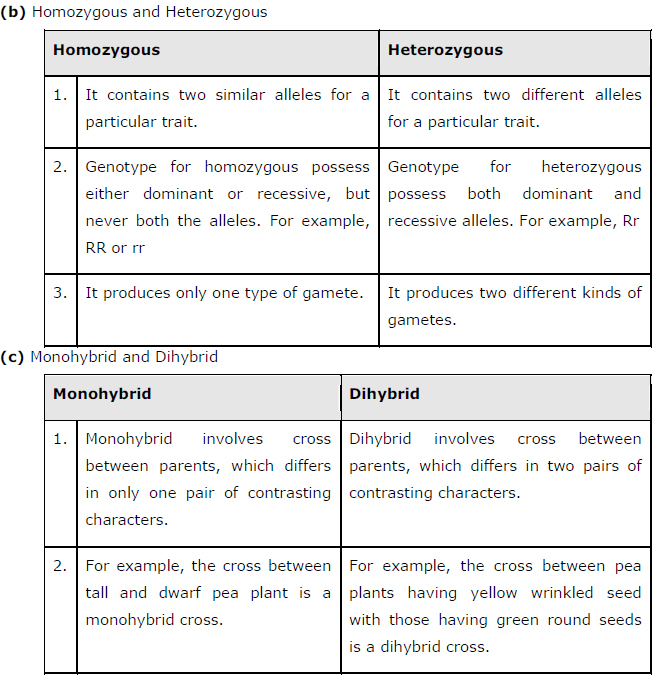 Question 3: A diploid organism is heterozygous for 4 loci, how many types of gametes can be produced? Answer Locus is a fixed position on a chromosome, which is occupied by a single or more genes. Heterozygous organisms contain different alleles for an allelic pair. Hence, a diploid organism, which is heterozygous at four loci, will have four different contrasting characters at four different loci. For example, if an organism is heterozygous at four loci with four characters, say Aa, Bb, Cc, Dd, then during meiosis, it will segregate to form 8 separate gametes. If the genes are not linked, then the diploid organism will produce 16 different gametes. However, if the genes are linked, the gametes will reduce their number as the genes might be linked and the linked genes will be inherited together during the process of meiosis.

Question 4: Explain the Law of Dominance using a monohybrid cross. Answer Mendel’s law of dominance states that a dominant allele expresses itself in a monohybrid cross and suppresses the expression of recessive allele. However, this recessive allele for a character is not lost and remains hidden or masked in the progenies of F1 generation and reappears in the next generation. For example, when pea plants with round seeds (RR) are crossed with plants with wrinkled seeds (rr), all seeds in F1 generation were found to be round (Rr). When these round seeds were self fertilized, both the round and wrinkled seeds appeared in F2 generation in 3: 1 ratio. Hence, in F1 generation, the dominant character (round seeds) appeared and the recessive character (wrinkled seeds) got suppressed, which reappeared in F2 generation. 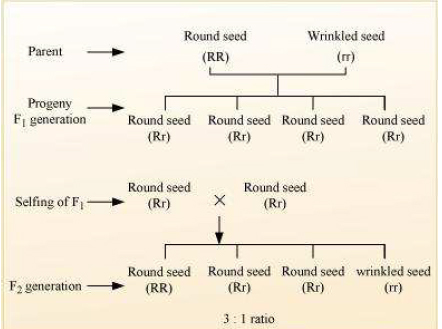 Question 6: Using a Punnett square, work out the distribution of phenotypic features in the first filial generation after a cross between a homozygous female and a heterozygous male for a single locus. Answer In guinea pigs, heterozygous male with black coat colour (Bb) is crossed with the female having white coat colour (bb). The male will produce two types of gametes, B and b, while the female will produce only one kind of gamete, r. The genotypic and phenotypic ratio in the progenies of F1 generation will be same i.e., 1:1. 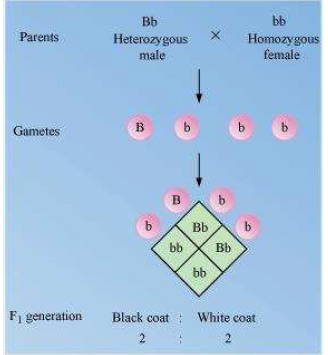 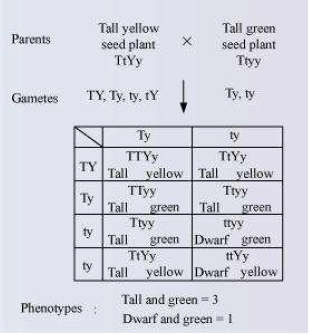 Question 8: Two heterozygous parents are crossed. If the two loci are linked what would be the distribution of phenotypic features in F1 generation for a dihybrid cross? Answer Linkage is defined as the coexistence of two or more genes in the same chromosome. If the genes are situated on the same chromosome and lie close to each other, then they are inherited together and are said to be linked genes. For example, a cross between yellow body and white eyes and wild type parent in a Drosophila will produce wild type and yellow white progenies. It is because yellow bodied and white eyed genes are linked. Therefore, they are inherited together in progenies. 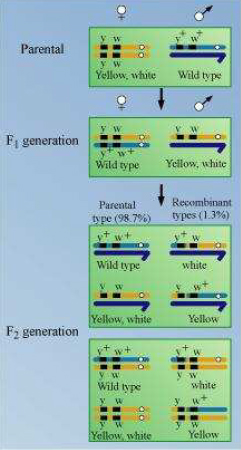 Question 9: Briefly mention the contribution of T.H. Morgan in genetics. Answer Morgan’s work is based on fruit flies (Drosophila melanogaster). He formulated the chromosomal theory of linkage. He defined linkage as the co-existence of two or more genes in the same chromosome and performed dihybrid crosses in Drosophila to show that linked genes are inherited together and are located on X-chromosome. His experiments have also proved that tightly linked genes show very low recombination while loosely linked genes show higher recombination.

Question 10: What is pedigree analysis? Suggest how such an analysis, can be useful. Answer Pedigree analysis is a record of occurrence of a trait in several generations of a family. It is based on the fact that certain characteristic features are heritable in a family, for example, eye colour, skin colour, hair form and colour, and other facial characteristics. Along with these features, there are other genetic disorders such as Mendelian disorders that are inherited in a family, generation after generation. Hence, by using pedigree analysis for the study of specific traits or disorders, generation after generation, it is possible to trace the pattern of inheritance. In this analysis, the inheritance of a trait is represented as a tree, called family tree. Genetic counselors use pedigree chart for analysis of various traits and diseases in a family and predict their inheritance patterns. It is useful in preventing hemophilia, sickle cell anemia, and other genetic disorders in the future generations. 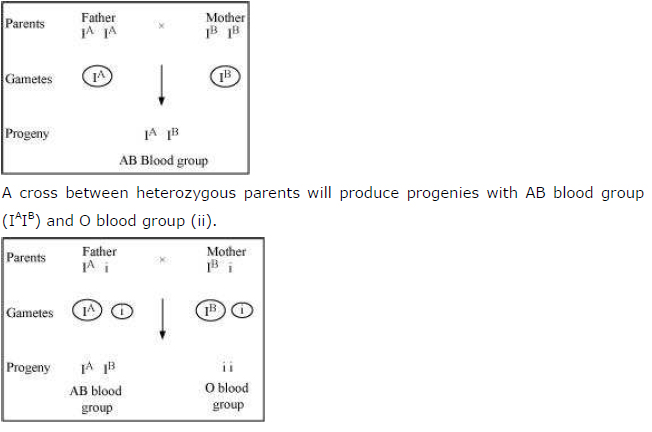 Question 13: Explain the following terms with example (a) Co-dominance (b) Incomplete dominance Answer (a) Co-dominance Co-dominance is the phenomenon in which both the alleles of a contrasting character are expressed in heterozygous condition. Both the alleles of a gene are equally dominant. ABO blood group in human beings is an example of co-dominance. The blood group character is controlled by three sets of alleles, namely, IA, IB, and i. The alleles, IA and IB, are equally dominant and are said to be co-dominant as they are expressed in AB blood group. Both these alleles do not interfere with the expression of each other and produce their respective antigens. Hence, AB blood group is an example of co-dominance. 2. Incomplete dominance Incomplete dominance is a phenomenon in which one allele shows incomplete dominance over the other member of the allelic pair for a character. For example, a monohybrid cross between the plants having red flowers and white flowers in Antirrhinum species will result in all pink flower plants in F1 generation. The progeny obtained in F1 generation does not resemble either of the parents and exhibits intermediate characteristics. This is because the dominant allele, R, is partially dominant over the other allele, r. Therefore, the recessive allele, r, also gets expressed in the F1 generation resulting in the production of intermediate pink flowering progenies with Rr genotype. 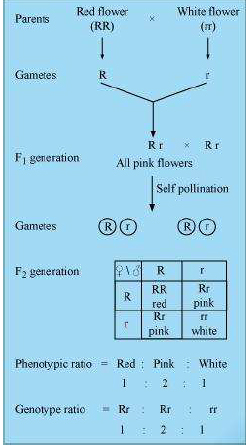 Question 16: Mention any two autosomal genetic disorders with their symptoms. Answer Two autosomal genetic disorders are as follows. 1. Sickle cell Anaemia It is an autosomal linked recessive disorder, which is caused by point mutation in the beta-globin chain of haemoglobin pigment of the blood. The disease is characterized by sickle shaped red blood cells, which are formed due to the mutant haemoglobin molecule. The disease is controlled by HbA and HbS allele. The homozygous individuals with genotype, HbS HbS, show the symptoms of this disease while the heterozygous individuals with genotype, HbA HbS, are not affected. However, they act as carriers of the disease. Symptoms Rapid heart rate, breathlessness, delayed growth and puberty, jaundice, weakness, fever, excessive thirst, chest pain, and decreased fertility are the major symptoms of sickle cell anaemia disease. (b) Down’s syndrome It is an autosomal disorder that is caused by the trisomy of chromosome 21. Symptoms The individual is short statured with round head, open mouth, protruding tongue, short neck, slanting eyes, and broad short hands. The individual also shows retarded mental and physical growth.