Class XII Biology Chapter 14 Ecosystem NCERT Solution is given below. 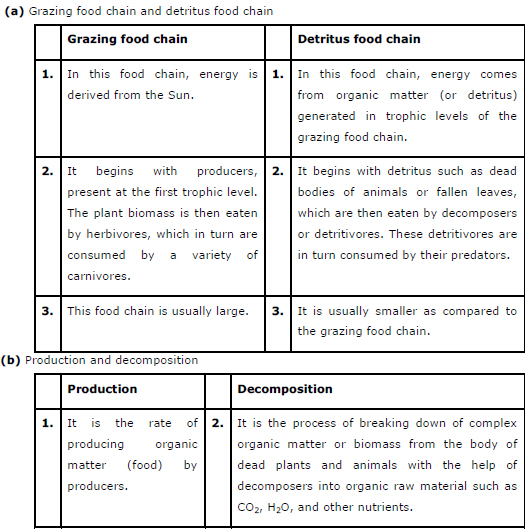 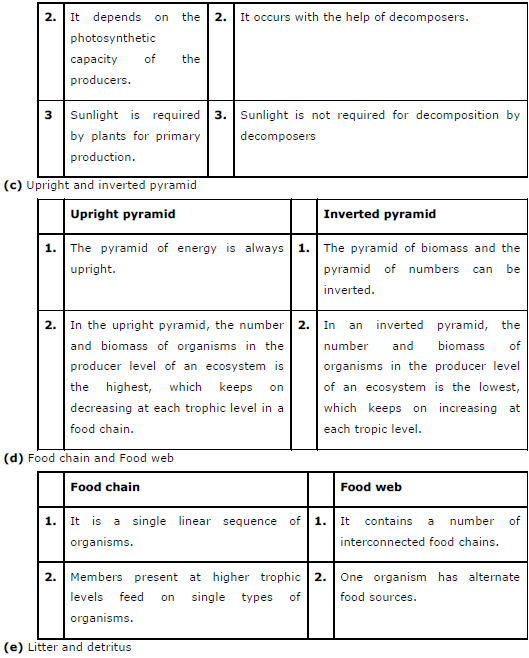 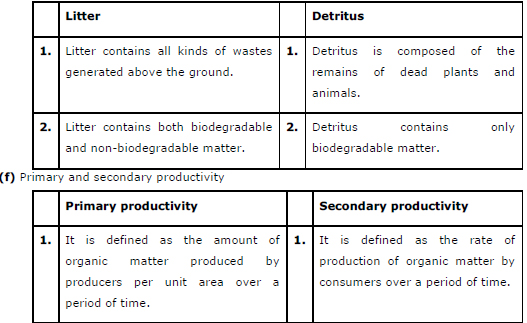 Question 7: Describe the components of an ecosystem. Answer An ecosystem is defined as an interacting unit that includes both the biological community as well as the non-living components of an area. The living and the non- living components of an ecosystem interact amongst themselves and function as a unit, which gets evident during the processes of nutrient cycling, energy flow, decomposition, and productivity. There are many ecosystems such as ponds, forests, grasslands, etc. The two components of an ecosystem are: (a) Biotic component: It is the living component of an ecosystem that includes biotic factors such as producers, consumers, decomposers, etc. Producers include plants and algae. They contain chlorophyll pigment, which helps them carry out the process of photosynthesis in the presence of light. Thus, they are also called converters or transducers. Consumers or heterotrophs are organisms that are directly (primary consumers) or indirectly (secondary and tertiary consumers) dependent on producers for their food. Decomposers include micro-organisms such as bacteria and fungi. They form the largest population in a food chain and obtain nutrients by breaking down the remains of dead plants and animals. (b) Abiotic component: They are the non-living component of an ecosystem such as light, temperature, water, soil, air, inorganic nutrients, etc. 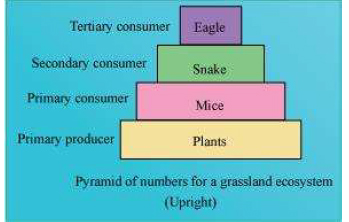 On the other hand, in a parasitic food chain, the pyramid of numbers is inverted. In this type of a food chain, a single tree (producer) provides food to several fruit eating birds, which in turn support several insect species. Pyramid of biomass A pyramid of biomass is a graphical representation of the total amount of living matter present at each trophic level of an ecosystem. It can be upright or inverted. It is upright in grasslands and forest ecosystems as the amount of biomass present at the producer level is higher than at the top carnivore level. The pyramid of biomass is inverted in a pond ecosystem as the biomass of fishes far exceeds the biomass of zooplankton (upon which they feed). 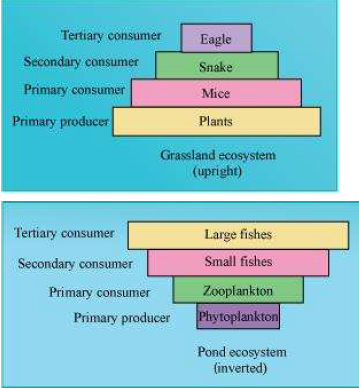 Question 10: Define decomposition and describe the processes and products of decomposition. Answer Decomposition is the process that involves the breakdown of complex organic matter or biomass from the body of dead plants and animals with the help of decomposers into inorganic raw materials such as carbon dioxide, water, and other nutrients. The various processes involved in decomposition are as follows: (1) Fragmentation: It is the first step in the process of decomposition. It involves the breakdown of detritus into smaller pieces by the action of detritivores such as earthworms. (2) Leaching: It is a process where the water soluble nutrients go down into the soil layers and get locked as unavailable salts. (3) Catabolism: It is a process in which bacteria and fungi degrade detritus through various enzymes into smaller pieces. (4) Humification: The next step is humification which leads to the formation of a dark- coloured colloidal substance called humus, which acts as reservoir of nutrients for plants. (5) Mineralization: The humus is further degraded by the action of microbes, which finally leads to the release of inorganic nutrients into the soil. This process of releasing inorganic nutrients from the humus is known as mineralization. Decomposition produces a dark coloured, nutrient-rich substance called humus. Humus finally degrades and releases inorganic raw materials such as CO2, water, and other nutrient in the soil.

Question 11: Give an account of energy flow in an ecosystem. Answer Energy enters an ecosystem from the Sun. Solar radiations pass through the atmosphere and are absorbed by the Earth’s surface. These radiations help plants in carrying out the process of photosynthesis. Also, they help maintain the Earth’s temperature for the survival of living organisms. Some solar radiations are reflected by the Earth’s surface. Only 2-10 percent of solar energy is captured by green plants (producers) during photosynthesis to be converted into food. The rate at which the biomass is produced by plants during photosynthesis is termed as ‘gross primary productivity’. When these green plants are consumed by herbivores, only 10% of the stored energy from producers is transferred to herbivores. The remaining 90 % of this energy is used by plants for various processes such as respiration, growth, and reproduction. Similarly, only 10% of the energy of herbivores is ransferred to carnivores. This is known as ten percent law of energy flow. 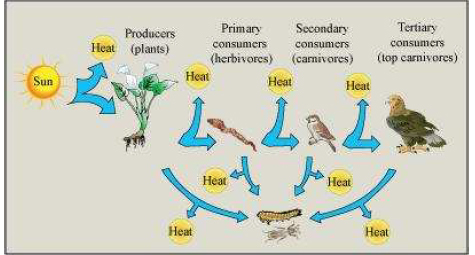 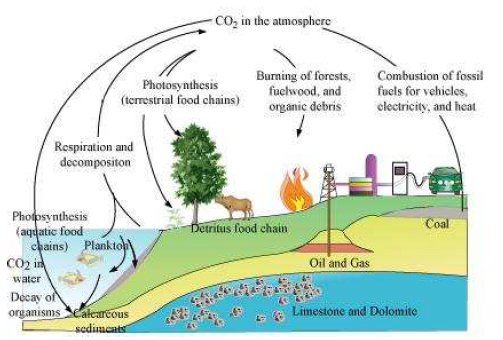 The carbon cycle is an important gaseous cycle which has its reservoir pool in the atmosphere. All living organisms contain carbon as a major body constituent. Carbon is a fundamental element found in all living forms. All biomolecules such as carbohydrates, lipids, and proteins required for life processes are made of carbon. Carbon is incorporated into living forms through a fundamental process called ‘photosynthesis’. Photosynthesis uses sunlight and atmospheric carbon dioxide to produce a carbon compound called ‘glucose’. This glucose molecule is utilized by other living organisms. Thus, atmospheric carbon is incorporated in living forms. Now, it is necessary to recycle this absorbed carbon dioxide back into the atmosphere to complete the cycle. There are various processes by which carbon is recycled back into the atmosphere in the form of carbon dioxide gas. The process of respiration breaks down glucose molecules to produce carbon dioxide gas. The process of decomposition also releases carbon dioxide from dead bodies of plants and animals into the atmosphere. Combustion of fuels, industrialization, deforestation, volcanic eruptions, and forest fires act as other major sources of carbon dioxide.