Mr Willy Wonka begins by inventing Wonka- Vite, which makes people younger. But Wonka- Vite is too strong. So some people disappear, because their age becomes Minus! One person actually becomes minus eighty-seven, which means he’s got to wait eighty-seven years before he can come back.

Mr Wonka said, “So once again I rolled up my sleeves and set to work. Once again I squeezed my brain, searching for the new recipe… I had to create age… to make people old… old, older, oldest… ‘Ha-ha!’ I cried, for now the ideas were beginning to come. ‘What is the oldest living thing in the world? What lives longer than anything else?’”

“Right you are, Charlie! But what kind of a tree? Not the Douglas fir. Not the oak. Not the cedar. No, no, my boy. It is a tree called the Bristlecone pine that grows upon the slopes of Wheeler Peak in Nevada, U.S.A. You can find Bristlecone Pines on Wheeler Peak today that are over 4000 years old! This is fact, Charlie. Ask any dendrochronologist you like (and look that word up in the dictionary when you get home, will you please?). So that started me off. I jumped into the Great Glass Elevator and rushed all over the world collecting special items from the oldest living things…

3. Mr Wonka begins by asking himself two questions. What are they?

“All over the world, Charlie,” Mr Wonka went on “I tracked down very old and ancient animals and took an important little bit of something from each one of them — a hair or an eyebrow or sometimes it was no more than an ounce or two of the jam scraped from between its toes while it was sleeping. I tracked down THE WHISTLE-PIG, THE BOBOLINK, THE SKROCK, THE POLLYFROG, THE GIANT CURLICUE, THE STINGING SLUG AND THE VENOMOUS SQUERKLE who can spit poison right into your eye from fifty yards away. But there’s no time to tell you about them all now, Charlie. Let me just say quickly that in the end, after lots of boiling and bubbling and mixing and testing in my Inventing Room, I produced one tiny cupful of oily black liquid and gave four drops of it to a brave twenty-year-old Oompa-Loompa volunteer to see what happened.”

“What did happen?” Charlie asked.

“It was fantastic!” cried Mr Wonka. “The moment he swallowed it, he began wrinkling and shrivelling up all over and his hair started dropping off and his teeth started falling out and, before I knew it, he had suddenly become an old fellow of seventy-five! And thus, my dear Charlie, was Vita-Wonk invented!”

ROALD DAHL
[from Charlie and the Great
Glass Elevator]

1. (i) What trees does Mr Wonka mention? Which tree does he say lives the longest?
(ii) How long does this tree live? Where can you find it?

2. How many of the oldest living things can you remember from Mr Wonka’s list? (Don’t look back at the story!) Do you think all these things really exist, or are some of them purely imaginary?

3. Why does Mr Wonka collect items trom the oldest things? Do you think this is the right way to begin his invention?

4. What happens to the volunteer who swallows four drops of the new invention? What is the name of the invention?

1. What do you call these insects in your language?

Add to this list the names of some insects common in your area.

2. Fill in the blanks in the recipe given below with words from the box.

3. A ‘family tree’ is a diagram that shows the relationship between the different members of a family. Fill in the family tree below with names, ages, and other details you think are relevant (you may even stick photographs, if you have them). Put your family trees up in the class. 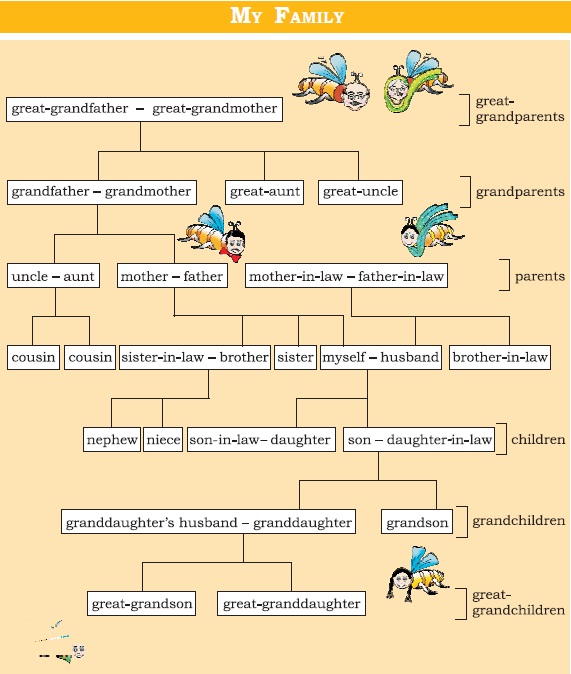 Using Do for Emphasis

Charlie asks, “What did happen?”

This is a way of asking the question “What happened?” with emphasis.

Given below are a few emphatic utterances. Say them to your partner. Let your partner repeat your utterance without the emphasis. Your partner may also add something to show she/he disagrees with you.

YOU : I did study.
PARTNER : You studied? I don’t believe you. Look at your marks!

YOU : You do say the most unbelievable things!
PARTNER : …

YOU : The earth does spin around.
PARTNER : …

1. (i) Make a list of the trees Mr Wonka mentions. Where do these trees grow? Try to find out from an encyclopaedia. Write a short paragraph about two or three of these trees.

(ii) Name some large trees commonly found in your area. Find out something about them (How old are they? Who planted them? Do birds eat their fruit?), and write two or three sentences about each one of them.

2. Find out something interesting about age, or growing old, and write a paragraph about it. Following are a few topics, suggested as examples.

• The age profile of a country’s population — does it have more young people than old people, or vice versa? What are the consequences of this?

• What is the ‘life expectancy’ of various living things, and various populations (how long can they reasonably expect to live)?
Delivery Delayed

Dad and the Cat and the Tree

Have you ever seen a cat climbing a tree? Sometimes a cat may climb too high and get stuck in the tree. The poor thing can’t come down without help. How would you help it? Surely, not like Dad in the poem. Is Dad a good climber? What were his plans? Read the poem to find out. 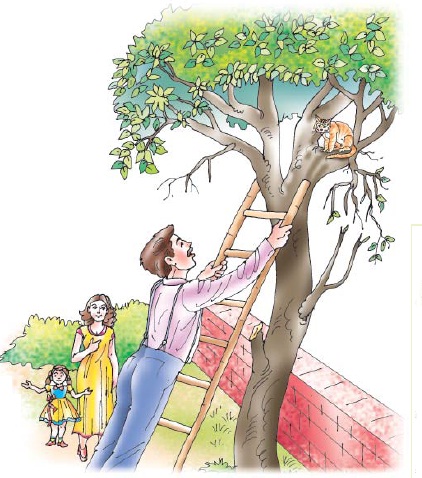 This morning a cat got
Stuck in our tree.
Dad said, “Right, just
Leave it to me.”

He got out the ladder
From the garden shed.
It slipped. He landed
In the flower bed.

“Never mind,” said Dad,
Brushing the dirt
Off his hair and his face
And his trousers and his shirt,

“Fall again?” said Dad.
“Funny joke!”
Then he swung himself up
On a branch. It broke.

Dad landed wallop
Back on the deck.
Mum said, “Stop it,
You’ll break your neck!”

“Rubbish!” said Dad.
“Now we’ll try Plan C.
Easy as winking
To a climber like me!” 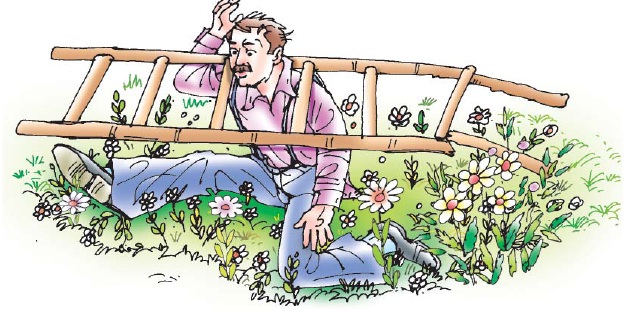 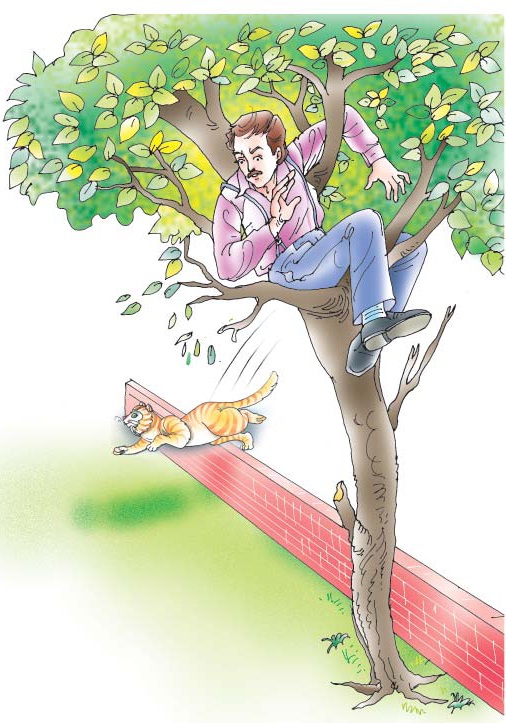 Then he climbed up high
On the garden wall.
Guess what?
He didn’t fall!

He gave a great leap
And he landed flat
In the crook of the tree-trunk —
Right on the cat!

The cat gave a yell
And sprang to the ground,
Pleased as Punch to be
Safe and sound.

So it’s smiling and smirking,
Smug as can be,
But poor old Dad’s
Still

Stuck
Up
The
Tree!