For many centuries, the problem of motion and its causes had puzzled scientists and philosophers. A ball on the ground, when given a small hit, does not move forever. Such observations suggest that rest is the ìnatural stateî of an object. This remained the belief until Galileo Galilei and Isaac Newton developed an entirely different approach to understand motion. 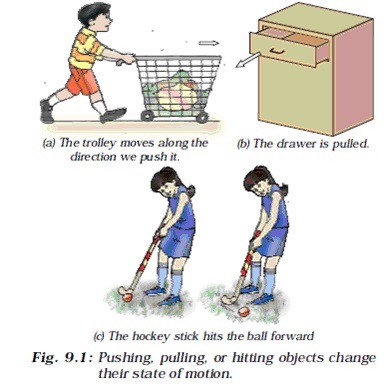 In our everyday life we observe that some effort is required to put a stationary object into motion or to stop a moving object. We ordinarily experience this as a muscular effort and say that we must push or hit or pull on an object to change its state of motion. The concept of force is based on this push, hit or pull. Let us now ponder about a ëforceí. What is it? In fact, no one has seen, tasted or felt a force. However, we always see or feel the effect of a force. It can only be explained by describing what happens when a force is applied to an object. Pushing, hitting and pulling of objects are all ways of bringing objects in motion (Fig. 9.1). They move because we make a force act on them.

From your studies in earlier classes, you are also familiar with the fact that a force can be used to change the magnitude of velocity of an object (that is, to make the object move faster or slower) or to change its direction of motion. We also know that a force can change the shape and size of objects (Fig. 9.2). 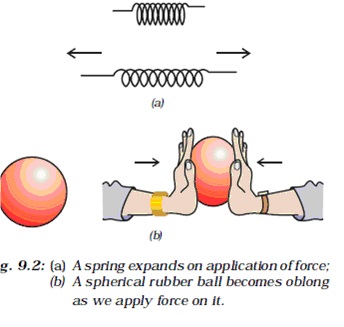 Fig. 9.3 shows a wooden block on a horizontal table. Two strings X and Y are tied to the two opposite faces of the block as shown. If we apply a force by pulling the string X, the block begins to move to the right. Similarly, if we pull the string Y, the block moves to the left. But, if the block is pulled from both the sides with equal forces, the block will not move. Such forces are called balanced forces and do not change the state of rest or of motion of an object. Now, let us consider a situation in which two opposite forces of different magnitudes pull the block. In this case, the block would begin to move in the direction of the greater force. Thus, the two forces are not balanced and the unbalanced force acts in the direction the block moves. This suggests that an unbalanced force acting on an object brings it in motion. 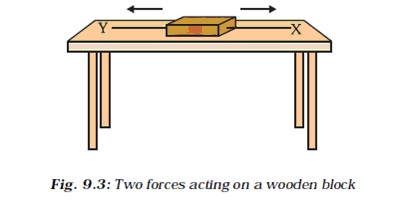 What happens when we ride a bicycle? When we stop pedalling, the bicycle begins to slow down. This is again because of the friction forces acting opposite to the direction of motion. In order to keep the bicycle moving, we have to start pedalling again. It thus appears that an object maintains its motion under the continuous application of an unbalanced force. However, it is quite incorrect. An object moves with a uniform velocity when the forces (pushing force and frictional force) acting on the object are balanced and there is no net external force on it. If an unbalanced force is applied on the object, there will be a change either in its speed or in the direction of its motion. Thus, to accelerate the motion of an object, an unbalanced force is required. And the change in its speed (or in the direction of motion) would continue as long as this unbalanced force is applied. However, if this force is removed completely, the object would continue to move with the velocity it has acquired till then.