You might have seen a driver of a car or a truck slowing down the vehicle at a traffic signal. You, too, slow down your bicycle whenever needed by applying brakes. Have you ever thought why a vehicle slows down when brakes are applied? Not only vehicles, any object, moving over the surface of another object slows down when no external force is applied on it. Finally it stops. Have you not seen a moving ball on the ground stopping after some time? Why do we slip when we step on a banana peel (Fig. 12.1)? Why is it difficult to walk on a smooth and wet floor? 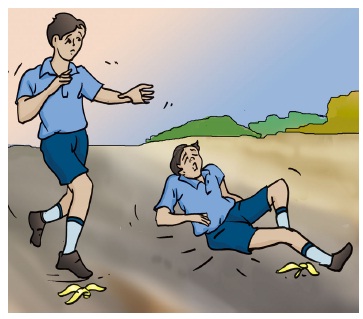 You will find the answers to such questions in this chapter.

Gently push a book on a table [Fig. 12.2(a)]. You observe that it stops after moving for some distance. Repeat this activity pushing the book from the opposite direction [Fig. 12.2, (b)]. Does the book stop this time, too? Can you think of an explanation? Can we say that a force must be acting on the book opposing its motion? This force is called the force of friction. 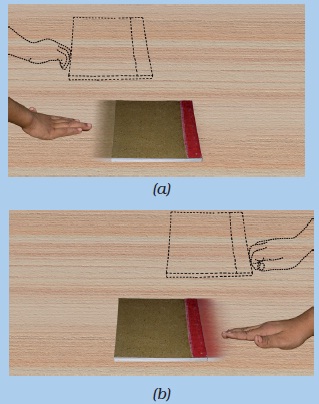 Fig. 12.2 (a), (b) : Friction opposes relative motion between the surfaces of the book and the table

Tie a string around a brick. Pull the brick by a spring balance (Fig. 12.3). You need to apply some force. Note down the reading on the spring balance when the brick just begins to move. It gives you a measure of the of force of friction between the surface of the brick and the floor.

Spring balance is a device used for measuring the force acting on an object. It consists of a coiled spring which gets stretched when a force is applied to it. Stretching of the spring is measured by a pointer moving on a graduated scale. The reading on the scale gives the magnitude of the force. 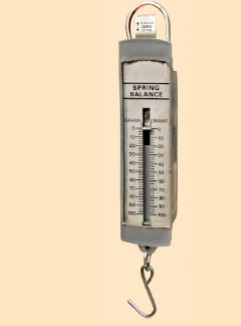 Make an inclined plane on a smooth floor, or on a table. You may use a wooden board supported by bricks, or books. [Fig. 12.4 (a)]. Put a mark with a pen at any point A on the inclined plane. Now let a pencil cell move down from this point. How far does it move on the table before coming to rest? Note down the distance. Now spread a piece of cloth over the table. Make sure that there are no wrinkles in the cloth. Try the activity again [Fig. 12.4 (b)].

Repeat this activity by spreading a thin layer of sand over the table. Maintain the same slope throughout the activity.

Does the distance covered depend on the nature of the surface on which the cell moves?

Could the smoothness of the surface of the cell also affect the distance travelled by it? 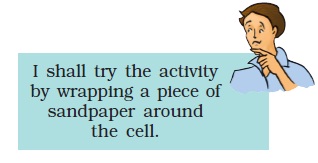 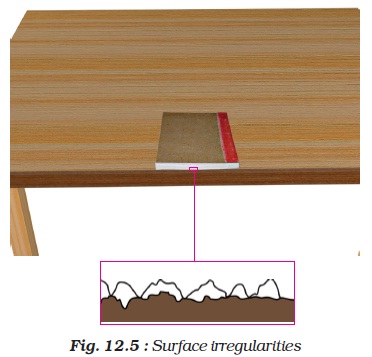 Recall your experience when last time you moved a heavy box from one place to another. If you have no such experience, get that experience now. What is easier — to move the box from rest, or to move it when it is already in motion? 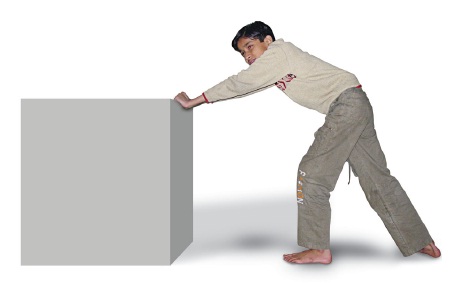 Recall now some of your experiences. Is it easier to hold a kulhar (earthen pot) or a glass tumbler? Suppose the outer surface of the tumbler is greasy, or has a film of cooking oil on it; would it become easier or more difficult to hold it? Just think : would it be possible to hold the glass at all if there is no friction?

Recall also how difficult it is to move on a wet muddy track, or wet marble floor. Can you imagine being able to walk at all if there were no friction? 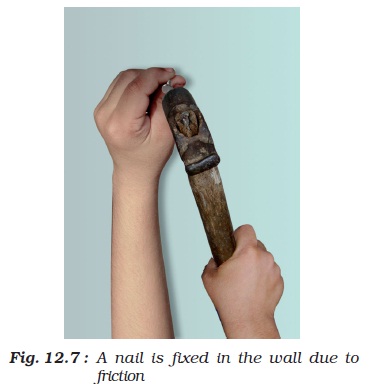 If an object started moving, it would never stop if there were no friction. Had there been no friction between the tyres of the automobiles and the road, they could not be started or stoped or turned to change the direction of motion. You could not fix a nail in the wall (Fig. 12.7) or tie a knot. Without friction no building could be constructed. 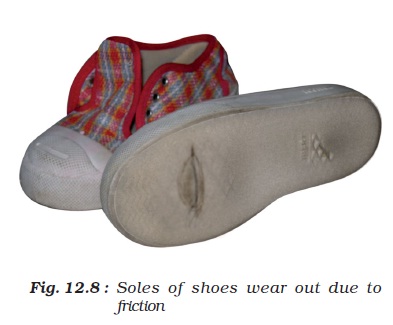 On the other hand, friction is an evil, too. It wears out the materials whether they are screws, ball bearings or soles of shoes (Fig. 12.8). You must have seen worn-out steps of foot over-bridges at railway stations.

Friction can also produce heat. Vigorously rub your palms together for a few minutes (Fig. 12.9). How do you feel? When you strike a matchstick against the rough surface, it catches fire (Fig. 12.10).

You might have observed that the jar of a mixer becomes hot when it is run for a few minutes. You can cite various other examples in which friction 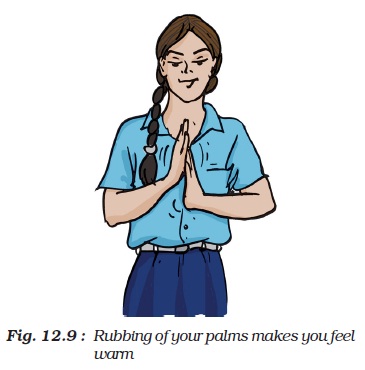 produces heat. In fact, when a machine is operated, heat generated causes much wastage of energy. We shall discuss the ways of minimising friction in the following section. 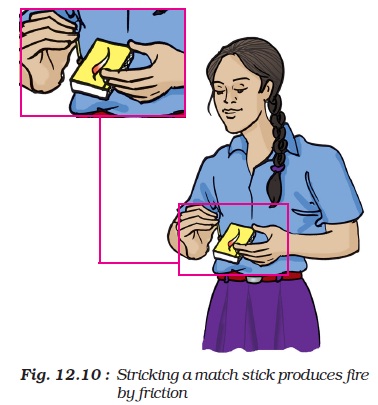 As you have seen in the previous section, friction is desirable in some situations.

Have you ever thought why the sole of your shoes is grooved [Fig. 12.11 (a)]? It is done to provide the shoes better grip on the floor, so that you can move safely. Similarly, the treaded tyres of cars,trucks and bulldozers provide better grip with the ground. 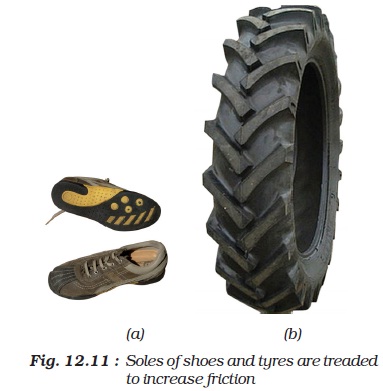 We deliberately increase friction by using brake pads in the brake system of bicycles and automobiles. When you are riding a bicycle, the brake pads do not touch the wheels. But when you press the brake lever, these pads arrest the motion of the rim due to friction. The wheel stops moving. You might have seen that kabaddi players rub their hands with soil for a better grip of their opponents. Gymnasts apply some coarse substance on their hands to increase friction for better grip.

In some situations, however, friction is undesirable and we would want to minimize it.

Why do you sprinkle fine powder on the carrom board? You might have noticed that when a few drops of oil are poured on the hinges of a door, the door moves smoothly. A bicycle and a motor mechanic uses grease between the moving parts of these machines. In all the above cases, we want to reduce 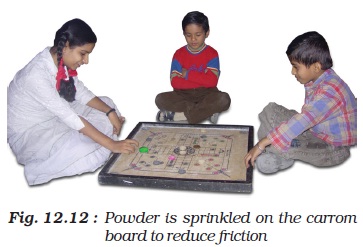 friction in order to increase efficiency. When oil, grease or graphite is applied between the moving part of a machine, a thin layer is formed there and moving surfaces do not directly rub against each other (Fig. 12.13). Interlocking of irregularities is avoided to a great extent. Movement becomes smooth. The substances which reduce friction are called lubricants. In some machines, it may not be advisable to use oil as lubricant. An air cushion between the moving parts is used to reduce friction. 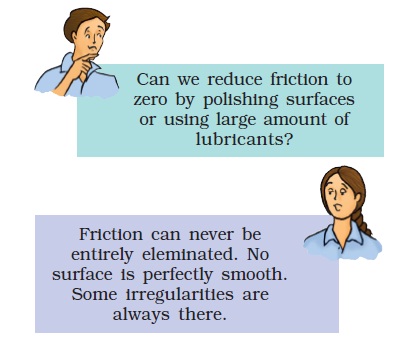 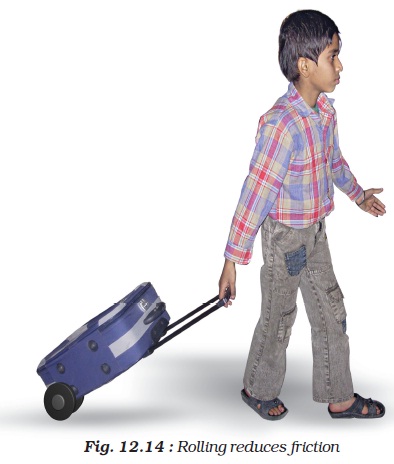 Take a few pencils which are cylindrical in shape. Place them parallel to each other on a table. Place a thick book over it (Fig. 12.15). Now push the book. You observe the pencils rolling as the book moves. Do you feel it easier to move the book in this way than to slide it? Do you think that resistance to the motion of the book has been reduced? Have you seen heavy machinary being moved by placing logs under it? 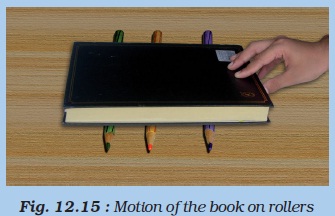 When one body rolls over the surface of another body, the resistance to its motion is called the rolling friction. Rolling reduces friction. It is always easier to roll than to slide a body over another. That is the reason it is convenient to pull the luggages fitted with rollers. Can you now understand why wheel is said to be one of the greatest inventions of mankind? 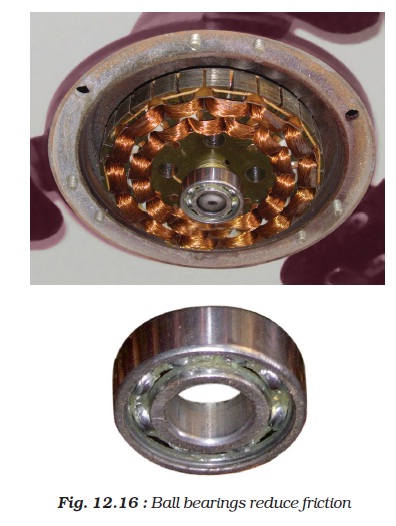 The frictional force exerted by fluids is also called drag.

It is obvious that when objects move through fluids, they have to overcome friction acting on them. In this process they lose energy. Efforts are, therefore, made to minimize friction. So, objects are given special shapes. Where do you think the scientists get hints for these special shapes? From nature, of course. Birds and fishes have to move about in fluids all the time. Their bodies must have evolved to shapes which would make them not to lose much energy in overcoming friction. You read about these shapes in Class VI. Look carefully at the shape of an aeroplanes (Fig. 12.17). Do you find any similarity in its shape and that of a bird? In fact, all vehicles are designed to have shapes which reduce fluid friction. 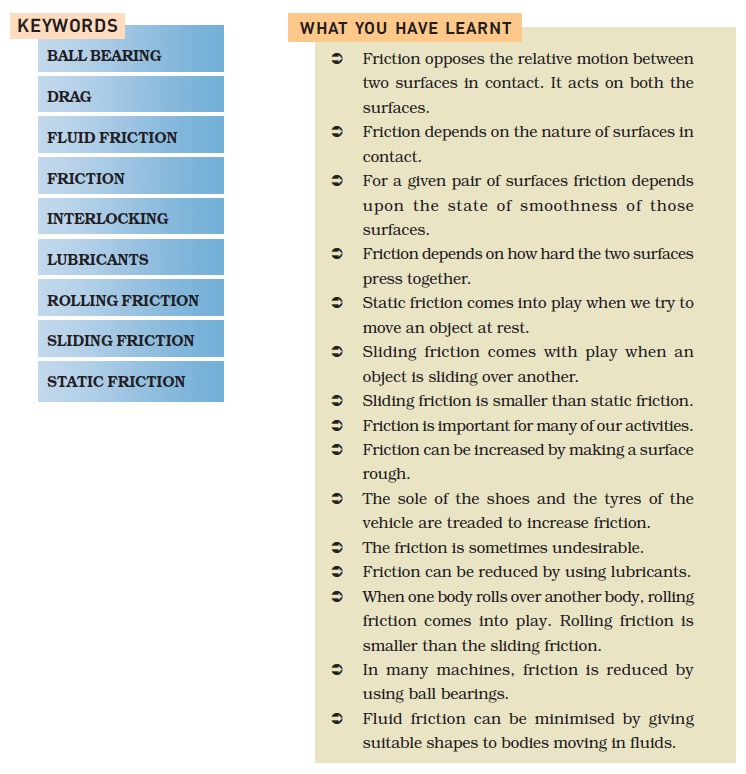 2. Four children were asked to arrange forces due to rolling, static and sliding frictions in a decreasing order. Their arrangements are given below.

3. Alida runs her toy car on dry marble floor, wet marble floor, newspaper and towel spread on the floor. The force of friction acting on the car on different surfaces in increasing order will be :

4. Suppose your writing desk is tilted a little. A book kept on it starts sliding down. Show the direction of frictional force acting on it.

5. You spill a bucket of soapy water on a marble floor accidently. Would it make it easier or more difficult for you to walk on the floor? Why?

6. Explain why sportsmen use shoes with spikes.

7. Iqbal has to push a lighter box and Seema has to push a similar heavier box on the same floor. Who will have to apply a larger force and why?

8. Explain why the sliding friction is less than the static friction.

9. Give examples to show that friction is both a friend and a foe.

10. Explain why objects moving in fluids must have special shapes.

1. What role does friction play in the sport of your choice? Collect some pictures of that sport in action where friction is either supporting it or opposing it. Display these pictures with proper captions on the bulletin board of your classroom.

2. Imagine that friction suddenly vanishes. How would the life be affected. List ten such situations.

3. Visit a shop which sells sports shoes. Observe the soles of shoes meant for various sports. Describe your deservations.

Take an empty match box. Take out its tray. Cut a used refill of a ball pen of the same width as the tray as shown in the figure below. Fix the refill with two pins on the top of the tray as shown in Fig. 12.18. Make two holes on the opposite sides of the tray. Make sure that the holes are large enough to allow a thread to pass through them easily. Take a thread about a metre long and pass it through the holes as shown. Fix beads at the two ends of the thread so that it does not come out. Insert the tray in the outer cover of the matchbox.

Explain your observation. Can you relate it to friction? 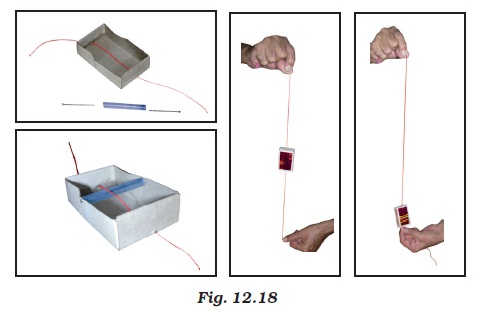 You can read more on the related topic on the following websites :

A riddle for you

In some situations, I oppose the motion
in other situations, I facilitate the motion
but, I always oppose
the relative motion
between two moving surfaces.
Put some lubricant, and
I become small there.
Make the moving surfaces rough
I make the movement tough.
I may be—
static, sliding or rolling
but whenever two surfaces are in motion
I am always there,
Tell me who I am!